A massive backlog of Medi-Cal applications is well into its third month, and California officials have provided little information about how and when the largest such bottleneck in the nation might be cleared.

The California Department of Health Care Services in Sacramento first reported 800,000 pending applications in April. By May, that number had grown by 100,000 and has not budged much since.  As the state works through older applications, new ones continue each day to enter the system, which has been plagued by computer glitches and inefficient procedures for verifying applicants’ personal information. 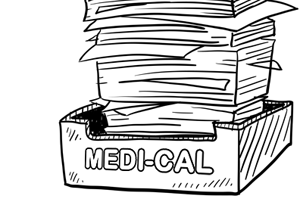 There are no estimates of processing times or how long delays will persist, though a state official said last month that new applications in May appeared to have slowed.

“All the resources are just devoted to getting people moving forward,” said Norman Williams, a department spokesman.

Not only has application processing been delayed, the state has fallen behind in sending final notifications to enrollees, officials confirmed. Meanwhile, many people are showing up at community clinics and costly emergency rooms as they have in the past. Others are putting off care.

Although Medi-Cal coverage is retroactive from the time eligible patients apply, some don’t trust they will be covered until they have a card in hand.

Rodriguez’s Medi-Cal application has been pending since March. In the meantime, he said, he can’t do his job as a truck driver – he needs to see a specialist about severe muscle and joint pain.

Part of the problem is high demand. In California, as in many of the 26 states that opted to expand Medicaid eligibility under the Affordable Care Act, people turned out in much higher numbers than projected. The state health department said it now expects 2.2 million people to enroll in Medi-Cal this month —300,000 more than estimated last fall.

Since last fall, 40 percent more people have signed up for Medi-Cal than the number who enrolled in private insurance through Covered California, the state’s health insurance exchange. Roughly 1.4 million of those applicants were newly eligible for Medi-Cal, which was expanded to serve people up to 138 percent of the federal poverty level. About 600,000 more were previously eligible for coverage but had not enrolled. Experts say the massive outreach campaigns across the country helped alert many of these people to their eligibility.

State health officials said about half of the 900,000 pending applications have been filed within the past 45 days—the maximum processing period typically allowed by law. Little is known about the other half, and why they have exceeded this time window.

“It’s difficult to determine exactly who is in that 900,000 and for what reason,” said Williams, the health department spokesman.

Although California experienced an initial swell of applications in December 2013, a second, enormous wave landed in March, as people scrambled to meet the deadline for obtaining insurance coverage.

“We did not anticipate the surge in applications to this extent,” said Anastasia Dodson, associate director of policy at the California Department of Health Care Services.

The state has refused to release the number of applications that were backlogged before April. “The numbers for previous months probably wouldn’t be accurate for readers,” said Dodson. Among other reasons, she said that the health department did not realize how many duplicated applications were stuck in the mix, as frustrated users tried repeatedly to sign up for Medi-Cal. “We had people who applied 30 times,” Dodson said.

The department has since identified and removed duplicate applications to arrive at the figures that have been reported since April.

Though details remain sketchy, one problem was delayed development of an interface that would connect the state’s new system with old county-based social services computer systems for verifying Medi-Cal eligibility. Some people were able to sign up smoothly by applying in-person at county health departments. But many applications submitted through the state website stalled.

Some applications have been delayed by missing or inaccurate information. Others have been slowed by outdated procedures for verifying residency—only recently replaced by an automated verification system.

Critics say that launching the Covered California insurance exchange was made a higher priority than improving the online enrollment process for Medi-Cal patients, despite their great numbers.

“In a very short period of time, there was a lot of work to do, and I think the folks that make the priorities decided that the particular piece for Medi-Cal recipients could wait,” said Frank Mecca, executive director of the County Welfare Directors Association of California.

Uncertainty For Providers And Patients

The holdup in Medi-Cal approvals has led to financial uncertainty for many of California’s community health clinics, which depend on Medi-Cal payments to supplement the reduced fees or fee waivers they accept from low-income, uninsured patients. A number of centers have recently expanded facilities, staff and services in anticipation of a wave of Medi-Cal patients and the extra cash they would bring.

“We basically don’t know if we’re going to be receiving payment for the services we’re providing,” said Carmela Castellano-Garcia, chief executive of the California Primary Care Association, which represents more than 1,000 community clinics and health centers. Private providers are even more wary.

“A typical private practice might say, ‘You’re uninsured,’ and be unwilling to participate in that bureaucracy of claims that need to be paid retroactively,” said Dylan Roby, a health policy professor at the University of California, Los Angeles. Patients, too, have been left in limbo.

“They’re afraid they may not be approved and that they’ll be stuck with this huge bill,” said Irais Bazan, an enrollment and eligibility manager at Ravenswood Family Health Center in East Palo Alto.

Rodriguez said he that he did not know about his retroactive payment options when he visited a county hospital in San Mateo two months ago for his muscle and joint pains. He borrowed money from his brother to pay off the $1,400 bill—much larger than he had expected.

He could not afford the pain medications that the doctor prescribed. He still does not have a diagnosis and said he will not try again until his Medi-Cal card arrives.

Thomas Kurthy of Los Angeles is waiting for his Medi-Cal card so that he can get a physical and a colonoscopy. His father was recently treated for cancer, and Kurthy said he wants to stay on top of his health.

His last doctor’s visit was in 2012. Since January, the 51-year-old garden designer has amassed a large folder of notes as he has tried to follow up with local health advocates, navigators, county health workers, and others who at various times have handled his Medi-Cal application.

“I’ve been bounced around from office to office, person to person,” said Kurthy. “I think if I didn’t stay on top of this, I would never hear from anybody.”

Last month, a county health worker told Kurthy that his application had a good chance of being decided within the next 30 to 45 days.