Johns Hopkins, Yale, Harvard, Columbia, Cornell — what do all these medical schools have in common? 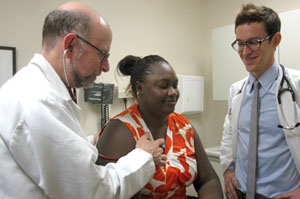 Beyond their first-rate reputation, they’re also on the short list of 10 U.S. medical schools that don’t have Departments of Family Medicine.  Elite schools have always focused on training specialists and researchers, but with the federal health law’s increased emphasis on primary care, some schools are expanding their missions to include family medicine.

Until this year, for example, the Mount Sinai School of Medicine in New York had neither a department nor any family physicians on staff. Students like Demetri Blanas, 26, who were interested in becoming family doctors found little support. For the first three years of school, his training focused almost exclusively on taking care of extremely ill patients in the hospital.

“I want to spend my career keeping people healthy rather than trying to bring them back from a very serious illness,” says Blanas. “I think it is what society needs right now, and that is important to me.” 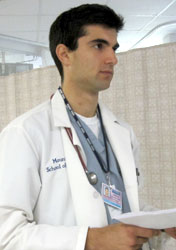 Blanas says many of his professors discouraged him from going into primary care, telling him it was too much work, the pay was lousy, the job was boring, and it simply wasn’t as intellectually rigorous as being a specialist. “It has a big impact over a long period of time when the people who are teaching you, who are your mentors, who are the ones that you’re supposed to be learning from, don’t think you’re making a good career choice,” he says. Yet he remained committed to pursuing family medicine.

Mount Sinai ranks among the bottom 20 medical schools in the country in terms of the number of primary care doctors it graduates—a distinction it shares with many elite schools. But that may soon change: In June, Mount Sinai started a new department of family medicine.

Dr. Dennis Charney, dean of the medical school, says that the new department represents a fundamental change in Mount Sinai’s mission. “It’s a big deal for our institution. We want to be one of the leading medical schools that educates the next generation of primary care doctors,” he says. And it comes not just because of the health overhaul law, but also because there is a growing interest among students in primary care, he added.

The new family physicians on faculty will teach students in all four years of medical school.

Listen to the Story

The department grew out of a new partnership between Mount Sinai and the Institute for Family Health, a network of 30 community health clinics across New York. Two years ago, the institute announced construction of a new 30,000 square foot clinic in Harlem, the center of Mount Sinai’s coverage area.

Health systems are eyeing partnerships like this one, between hospitals and primary care providers, as the future of medicine. The federal health law seeks to save money by offering bonuses to places that give patients better care for less money; to do that, they need to ramp up the kind of sophisticated, primary care that focus on managing chronic conditions such as diabetes to prevent expensive hospitalizations. 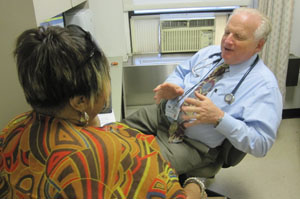 Dr. Neil Calman has a meeting in his office (Photo by Jenny Gold/KHN).

Calman was intrigued by Mount Sinai’s partnership offer but told them skeptically that “it’s pretty hard to have a family medicine-based organization in a hospital and a medical school that doesn’t have a department and doesn’t recognize it as a specialty.”

Mount Sinai decided to work with Calman to start a department, signing institute doctors onto the faculty. “It seemed like a natural marriage,” says Calman.

“I think people are finally realizing that the country will be bankrupt if we continue to admit people and readmit people for conditions that could be prevented with good primary care,” Calman says. It is a realization he has been waiting awaiting for the past 30 years. “I went into family medicine believing that was exactly what the country needed. Unfortunately, it’s taken a little longer for everybody else to realize that than I expected,” he adds with a chuckle.

He has reason to be optimistic.  Over the past three years, the number of U.S. medical students who choose family medicine residencies has grown by 20 percent.

Mount Sinai’s Dean Charney is hopeful that his school might become a model for other top-rated institutions.

“If you have schools like Mount Sinai and Harvard and Yale and Columbia and Penn saying this is an important part of the future medicine, there’ll be a trickle-down effect to the students who will say, ‘Yup, that’s what I want to do. I want to be at the vanguard,'” Charney says.

The Next Frontier For Elite Med Schools: Primary Care