Blue Cross and Blue Shield of North Carolina planned to announce Wednesday that the insurer will spend $15 million to arm as many as 750 physicians in the state with state-of-the-art electronic medical records. 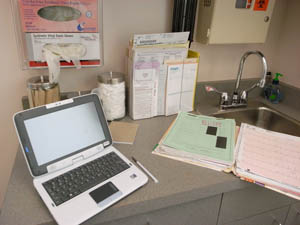 Blue Cross, the dominant financier of the state’s health system with 54 percent of the insured on its rolls, stands to benefit if the electronic records help doctors practice a more efficient style of medicine. For instance, the computer can prompt doctors to do blood tests or other follow-ups with patients.

And the doctors, who all work for either free clinics or in independent small practices, get a free piece of technology they may not otherwise be able to afford. The 2009 stimulus bill makes as much as $44,000 available to each physician who successfully adopts electronic records, but those payments only begin to arrive after doctors make investments.

The Blue Cross money, on the other hand, is available upfront and will help physicians move faster than the stimulus funds, said the insurers chief executive, Brad Wilson, in an interview earlier this month. The move shows the urgency with which insurers seek ways to bring costs down, and the remaining barriers physicians face in making changes.

“Even with the [stimulus] incentives it’s difficult for small practices to make those upfront investments,” said Greg Griggs, the executive vice president of the North Carolina Academy of Family Physicians. To “really do it right, and use it in a meaningful manner, is still extraordinarily expensive.”

Blue Cross will cover 85 percent of the costs of going digital for participating practices – which can reach into the tens of thousands of dollars per doctor –  and will pay the full cost of implementation for 39 free clinics included in the project.

The electronic record program is also financed in part by Allscripts, the Chicago-based vendor that is supplying the software and technical assistance to small practices.

While the move is one of a number of projects Blue Cross has unveiled to improve ties with doctors, such as an ad campaign imploring people to stop scapegoating doctors, pharmaceutical executives and others for health care’s high costs and instead search for answers, the insurer also has a lot to gain.

In a press release announcing the deal – to be released at 10 a.m. today – Blue Cross said the electronic records could help practices form more organized groups, known as medical homes. Such practices have helped Blue Cross cut specialist visits by 50 percent and emergency room trips by 70 percent in some cases, the press release said. The $15 million investment could buy the insurer some future savings, too.