Listen to audio of this story from our partner, WBUR’s Here and Now.

LOS ANGELES — At precisely 8:30 a.m. on a Tuesday morning, the doors to the needle exchange on Skid Row open and the daily procession of injection drug users begins.

Michael Poor, 47, is one of the first customers. He has used his last clean syringe. Poor, who is homeless and addicted to methamphetamines, says coming to the downtown exchange puts his mind at ease: clean needles lower his risk for HIV.

“It is a very needed service, not just in downtown but anywhere drugs are an issue,” says Poor, a lanky, friendly man who is missing all of his teeth. “Thanks to needle exchange … I have stayed pretty healthy, which is a hard thing to do when you are injecting drugs.”

Needle exchanges like the one Poor visits could receive a financial boost this year following a decision by Congress to lift a ban on federal funding. As abuse of prescription drugs and opiates continues to spread across the nation, more states are considering exchanges as a way to save lives.

Indiana, for instance, opened its first exchange after an HIV outbreak last year.

The change in federal policy, part of a spending bill approved earlier this month, allows funding only in areas where drug-related cases of hepatitis and HIV are rising or are likely to. State and city health departments will make that determination along with the federal Centers for Disease Control and Prevention, according to the legislation.

The money can be used to pay for staff and programs, but not for syringes.

“It is really an important and historic moment for us at syringe exchanges,” said Mark Casanova, executive director of Homeless Health Care Los Angeles, which runs the syringe exchange on Skid Row, known as the Center for Harm Reduction. “But it doesn’t go far enough.”

Casanova said about a third of his $350,000 budget for the exchange program is spent on the 1.2 million syringes he hands out each year, and he will have to continue relying heavily on private donations to pay for them.

Despite the restrictions, lifting the ban underscores a growing recognition that needle exchange programs can help reduce the the spread of infectious diseases, said Daniel Raymond, policy director for Harm Reduction Coalition.

“This is a huge victory,” said Raymond, whose national organization advocates and provides training for exchange programs. “It is in some way the last chapter of an era where syringe exchange was considered too volatile and too partisan [for policy makers] to come to a consensus.”

Critics of needle programs counter that opening the door to federal funding could leave less money for treatment of people who want to get sober. The new law does not allot additional funds for the exchanges, but rather allows them to compete for existing drug program money.

“The dollars are precious these days,” said Calvina Fay, executive director of Drug Free America Foundation, a drug policy and prevention organization. “When we have people wanting to get clean and standing in line waiting for a treatment bed … the money could certainly be better spent.”

Needle exchanges began at the height of the AIDS epidemic and today number roughly 200 around the United States, including about 40 in California.

“Syringe programs have really been concentrated in large cities and have done an excellent job of preventing HIV infection where they have been implemented, but we now really need to move to address the new injectors that we see in small towns and in rural areas, particularly in Appalachia,” said Don Des Jarlais of the Icahn School of Medicine at Mount Sinai, who has spent 25 years studying the exchanges. 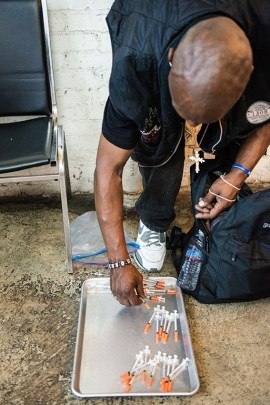 A man counts his used needles before turning them in for new ones. The Center for Harm Reduction on Skid Row distributes 1.2 million syringes each year. (Heidi de Marco/KHN)

Des Jarlais said federal funding should enable existing centers to expand and new ones to open.. “With the exception of a few states, there really has not been adequate funding of needle exchange programs in the US,” he said.

Libby Harrison, who manages the Cincinnati Exchange Project in Ohio, said it was “about damn time” for the change in federal policy.

“We’ve had the science on syringe exchange for almost 30 years. People and their politics getting in the way of science drives me crazy,” said Harrison, whose exchange has two staff members and is open three days a week in a region that has been hit hard by drug abuse.

Inside the lobby of the Harm Reduction Center in Los Angeles, customers wait in a line marked with red tape on the floor. A poster on the wall reads in big letters, “Needle exchange saves lives.”

At the front of the room, plastic bins are filled with syringes, sterile water ampoules, rubber bands, antibacterial ointment and alcohol swabs. An oversized, locked red bin sits nearby, and clients deposit dirty needles into it. 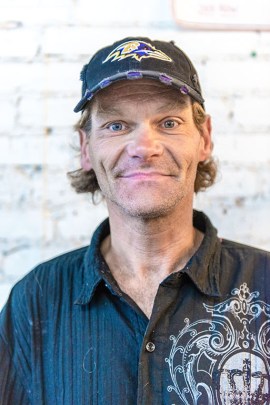 Michael Poor, 47, visits the needle exchange at the Center for Harm Reduction, which is part of Homeless Healthcare Los Angeles, on a daily basis. He lives in a tent on Skid Row and is addicted to methamphetamine. (Heidi de Marco/KHN)

They don’t need appointments, insurance or even identification. They simply answer a few questions, including whether they are homeless. When 26-year-old Eli Guerra walks up to the front counter, he tells the clerk he is out of needles. The clerk asks him what he uses now.

“Whatever I get my hands on,” he replies.

Guerra, who uses heroin, has been coming to the needle exchange for about a year but says he hopes this will be one of his last visits.

Chloe Blalock, program coordinator of the center, said she hopes federal funding will enable her to hire more people and expand services such as therapy, medical care, overdose prevention training and medication-assisted treatment. For now, she can afford to stay open only seven hours on weekdays and six on weekends.

On a recent Tuesday, Dr. Rolando Tringale was at the center, teaching medical students about the health effects of drug use.

Tringale, who treats abscesses and wounds, explained why staffers hand out alcohol swabs. “This is an important part of harm reduction education, preventing skin-based infections,” he said.

Diamond Mendoza, a self-described homeless man who is addicted to heroin, said that since coming to the exchange he has learned a lot about injecting drugs more safely. He wipes his skin with alcohol before puncturing it. He goes to see the doctor whenever he gets a wound or an abscess. And he always uses clean needles, he said. 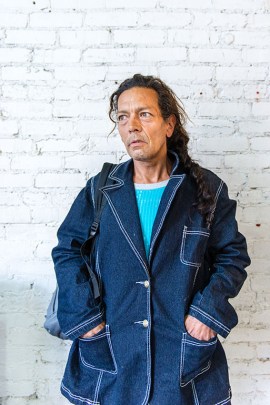 Heroin addict Diamond Mendoza, 49, dropped off a pile of syringes at the needle exchange. “I usually bring about 40 needles at a time. I exchange my dirties for my cleans. And it’s really good here,” he said. (Heidi de Marco/KHN)

“I don’t have HIV because I am really careful,” said Mendoza, who exchanged 40 needles on a recent morning.

Michael Poor said he has been using drugs since getting hooked on Vicodin, when he was a registered nurse. At first, Poor said, he couldn’t get clean syringes and often reused and shared them.

He said he believes that’s how he became infected with hepatitis C.

Poor said he has been coming to the center for about five years and stocks up so he can give clean needles to others. Staff members know him by name.

During his recent visit, he dumped about 35 used syringes into the red bin.

Minutes later, he was back out on the street, holding a small brown lunch bag filled with supplies.