Shelley Toreson had health insurance for years, but not anymore. Instead, she is part of an unusual Nevada nonprofit that helps connect 12,000 uninsured residents to doctors and hospitals who are willing to accept a lower-cost, negotiated fee for their services.

“The cost just kept going up and the coverage kept getting less,” says Toreson, 62, of her old insurance.

She’s joined the Access to Healthcare Network, a medical discount plan that helps uninsured residents with low and moderate incomes get care from 2,000 providers around the state offering a wide variety of medical services. In addition to the provider charges, members also pay $35 a month to support Access to Healthcare’s coordinators who help them understand their options and what they are responsible for.

One in five people in Nevada is uninsured. 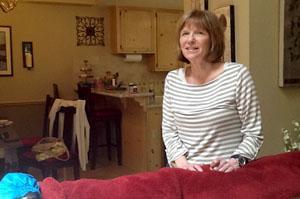 Shelley Toreson in her home in Minden, Nev. Toreson is part of a discount plan that helps lower-income people negotiate with doctors and hospitals for lower prices on medical care (Photo by Pauline Bartolone/Capital Public Radio).

Toreson, who lives near Reno, says that costs for her medical care no longer catch her off guard. She recently had gall bladder surgery and borrowed about $1,700 from family and friends to pay for it. With the help of a care coordinator, she found a hospital that would accept her case, although she had to wait about three weeks for the surgery.

“They’re so willing to work with you on whatever kind of problem you might have,” she says. “Anytime you call an insurance company … their first thing is like, how are we going to not pay this?”

Access to Healthcare is the brainchild of Sherri Rice, who for 25 years has been a consultant who started or shaped up nonprofit organizations. Health care and government groups in Reno came to her asking for help in figuring out a way to get care for the uninsured. She responded that many of the key stakeholders — including doctors, hospitals, government and financiers and bankers — would need to be involved in the discount plan.

“I started by asking the hospitals for rates,” recalls Rice, who now serves as the network CEO. “I asked the uninsured to pay cash at the time of service plus a membership fee. I asked the providers to lower their rates. I asked the government to put money in to help sustain the network. I asked everyone to do something.”

Her creation now has dozens of staff members and a central office in Reno. Rice calls Access to Healthcare a shared-responsibility model because the patient and the provider each contributes and neither is overburdened.

Rice says about two-thirds of the members are employed but don’t have health benefits at the job. The network gets them into the health care system, and leaves insurance companies out of the picture. 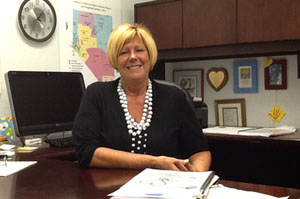 Sherri Rice, CEO of Access to Healthcare Network, in her Reno, Nev., office. Rice thought connecting the uninsured with doctors and hospitals to negotiate rates would benefit both parties (Photo by Pauline Bartolone/Capital Public Radio).

“This is an organization that is taking the poor, and many of them disenfranchised, and giving them an opportunity to participate in such an important aspect of life — your own health care,”  Lidholm says.

But she adds, the model works only because the hospital gets higher payments from private and public insurance. Some network members have to raise money through bake sales or other charity events to pay bills for their treatment. The negotiated fees have to be paid up front and it can add up, particularly for people with chronic or expensive conditions like cancer.

And even with those payments, Lidholm says her hospital loses money on discounted surgeries like Toreson’s gall bladder procedure.

“It’s a good deal,” she says. “Could we afford to do that for everyone that walks through the door? No.”

Still, Lidholm says giving care to the uninsured before it reaches an emergency saves everyone the higher cost of urgent care. And she says the network does a good job at keeping their members out of urgent situations.

“Access to Healthcare Network has the lowest ER utilization of any payer that I work with. And that’s remarkable,” she says.

Starting next year, two-thirds of the Network members will probably gain traditional insurance coverage because the new federal health law requires them to have it. Some members will be eligible for federal subsidies to help them pay for it, and the network is partnering with St. Mary’s Health Plans to offer them policies that comply with Obamacare.

But Rice says the Network will continue because there will still be people who fall through the cracks — including immigrants who are not in the country legally, and people who make too little money to be subject to the mandate to buy health insurance. Under the health law, those people can qualify for the now optional Medicaid expansion. Nevada Gov. Brian Sandoval, a Republican, says he supports expanding Medicaid under the health law, but the state legislature has not yet acted to do so.

This story is part of a collaboration that includes Capital Public Radio, NPR and Kaiser Health News.

A Nevada Health Plan — Without The Insurance