This story is part of a reporting partnership that includes Capital Public Radio,

CARSON CITY, Nev.–Sandy Parcells is one of more than a half million Nevadans who are uninsured. On a recent Thursday, she waited at the Sierra Nevada Health Center in Carson City for a follow-up appointment.

“I tried absolutely everything I could do to get some medical attention, and these guys were the only ones who could help me out” said Parcells. “I even called the suicide hotline the day that I came in here. I was absolutely beside myself for help.” Parcells couldn’t afford to refill prescriptions for her migraines and depression. She also can’t afford to get a colonoscopy, which she says is recommended for her because her mother died of colon cancer.

Nevada has one of the highest rates of uninsured people in the nation – more than one in five Nevadans lack coverage. The state voted to reelect President Barack Obama by a margin of almost 7 points, but the president’s health law has been as controversial in Nevada as it has been in most states led by a Republican governor. Nevada was one of the 27 states that challenged the constitutionality of the Affordable Care Act in court. But now Gov. Brian Sandoval is moving forward on a key part of the law.

”We’re in the process of building the exchange as we speak, and it will be a place for Nevadans to go and see what the best opportunity is for them,” Sandoval said. 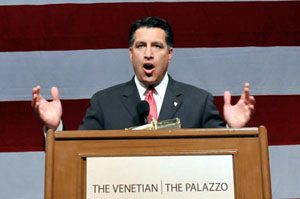 After the Supreme Court upheld the majority of the health law, Sandoval said it put a burden on states, and he hoped Congress would act to change it. But he recognized the law might be here to stay, so since 2011, Nevada has quietly been building a state exchange.

“Either the federal government was going to do it, or the state would have to do it ourselves,” Sandoval said. “And Nevadans are fiercely independent, so we made a decision to build the exchange ourselves, and we are moving forward with that.”

Right now, the Silver State Health Insurance Exchange is little more than a website and a staff of eight working in Carson City. The state is using federal dollars to set up the exchange, but the goal is for it to be self-sufficient in the future.

Nevada’s exchange has been moving so fast, he says, that it has become one of the first to test some of the federal guidelines for the states. He says the federal government has tweaked some rules as a result.

“We’ve been able to get out in front and push the edges. They’ve been actually looking to us for some information on different programs,” Bawden says.

Nevada’s exchange will provide an open marketplace for insurers, with little regulation and lots of choices for consumers, Bawden says. And he’s proud the state has stepped up.

“We’re at a point where we’re going to be ready to have a state-based exchange and avoid federal intervention, whereas a lot of the other states that just went along the lawsuit path are scrambling to try to figure out what they can do,” Bawden said.

The exchange staff aims to reduce the uninsurance rate to 8 percent from about 22 percent, according to Bawden, and it is on schedule to start enrolling people in October 2013.

KHN’s ‘What the Health?’: Much Ado About Drug Prices