PORTLAND, Ore. — After nearly 40 years as an internist, Dr. Ron Naito knew what the sky-high results of his blood test meant. And it wasn’t good.

But when he turned to his doctors last summer to confirm the dire diagnosis — stage 4 pancreatic cancer — he learned the news in a way no patient should.

The first physician, a specialist Naito had known for 10 years, refused to acknowledge the results of the “off-the-scale” blood test that showed unmistakable signs of advanced cancer. “He simply didn’t want to tell me,” Naito said.

A second specialist performed a tumor biopsy, and then discussed the results with a medical student outside the open door of the exam room where Naito waited.

“They walk by one time and I can hear [the doctor] say ‘5 centimeters,’” said Naito. “Then they walk the other way and I can hear him say, ‘Very bad.’”

“I knew what it was,” Naito said last month, his voice thick with emotion. “Once [tumors grow] beyond 3 centimeters, they’re big. It’s a negative sign.”

The botched delivery of his grim diagnosis left Naito determined to share one final lesson with future physicians: Be careful how you tell patients they’re dying.

Since August, when he calculated he had six months to live, Naito has mentored medical students at Oregon Health & Science University and spoken publicly about the need for doctors to improve the way they break bad news.

“Historically, it’s something we’ve never been taught,” said Naito, thin and bald from the effects of repeated rounds of chemotherapy. “Everyone feels uncomfortable doing it. It’s a very difficult thing.”

Robust research shows that doctors are notoriously bad at delivering life-altering news, said Dr. Anthony Back, an oncologist and palliative care expert at the University of Washington in Seattle, who wasn’t surprised that Naito’s diagnosis was poorly handled.

“Dr. Naito was given the news in the way that many people receive it,” said Back, who is a co-founder of VitalTalk, one of several organizations that teach doctors to improve their communication skills. “If the system doesn’t work for him, who’s it going to work for?”

Up to three-quarters of all patients with serious illness receive news in what researchers call a “suboptimal way,” Back estimated.

“’Suboptimal’ is the term that is least offensive to practicing doctors,” he added.

The poor delivery of Naito’s diagnosis reflects common practice in a country where Back estimates that more than 200,000 doctors and other providers could benefit from communication training.

Too often, doctors avoid such conversations entirely, or they speak to patients using medical jargon. They frequently fail to notice that patients aren’t following the conversation or that they’re too overwhelmed with emotion to absorb the information, Back noted in a recent article.

“[Doctors] come in and say, ‘It’s cancer,’ they don’t sit down, they tell you from the doorway, and then they turn around and leave,” he said.

That’s because for many doctors, especially those who treat cancer and other challenging diseases, “death is viewed as a failure,” said Dr. Brad Stuart, a palliative care expert and chief medical officer for the Coalition to Transform Advanced Care, or C-TAC. They’ll often continue to prescribe treatment, even if it’s futile, Stuart said. It’s the difference between curing a disease and healing a person physically, emotionally and spiritually, he added.

“Curing is what it’s all about and healing has been forgotten,” Stuart said.

The result is that dying patients are often ill-informed. A 2016 study found that just 5% of cancer patients accurately understood their prognoses well enough to make informed decisions about their care. Another study found that 80% of patients with metastatic colon cancer thought they could be cured. In reality, chemotherapy can prolong life by weeks or months, and help ease symptoms, but it will not stop the disease.

Without a clear understanding of the disease, a person can’t plan for death, Naito said. 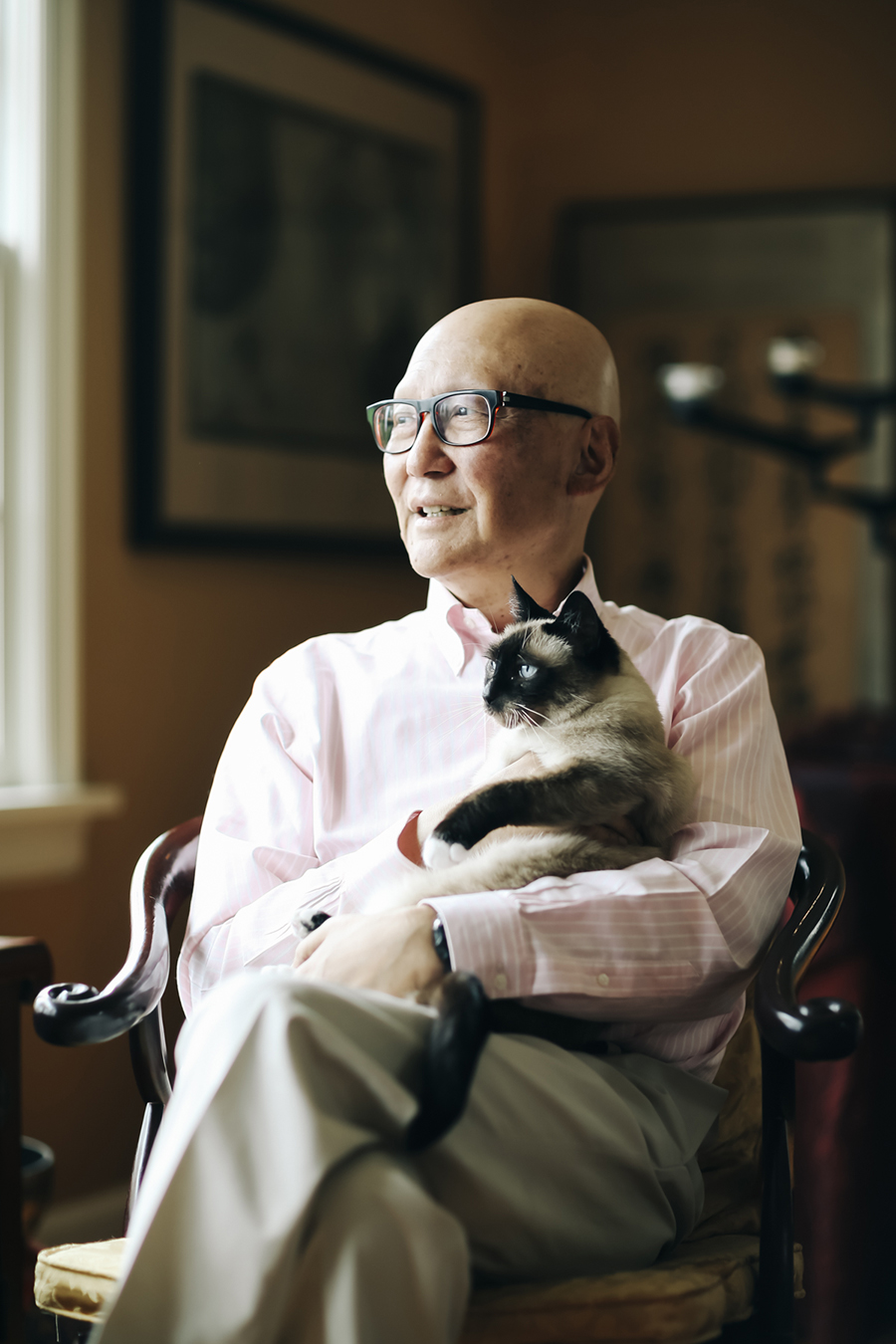 Naito cuddles his cat, Dolly, at his Portland, Ore., home in May 2019. The poor delivery of Naito’s diagnosis with stage 4 pancreatic cancer left him determined to share his experience with future physicians.(Michael Hanson for KHN)

“You can’t go through your spiritual life, you can’t prepare to die,” Naito said. “Sure, you have your [legal] will, but there’s much more to it than that.”

The doctors who treated him had the best intentions, said Naito, who declined to publicly identify them or the clinic where they worked. Reached for verification, clinic officials refused to comment, citing privacy rules.

Indeed, most doctors consider open communication about death vital, research shows. A 2018 telephone survey of physicians found that nearly all thought end-of-life discussions were important — but fewer than a third said they had been trained to have them.

Back, who has been urging better medical communication for two decades, said there’s evidence that skills can be taught — and that doctors can improve. Many doctors bridle at any criticism of their bedside manner, viewing it as something akin to “character assassination,” Back said.

“But these are skills, doctors can acquire them, you can measure what they acquire,” he said.

It’s a little like learning to play basketball, he added. You do layups, you go to practice, you play in games and get feedback — and you get better.

For instance, doctors can learn — and practice — a simple communication model dubbed “Ask-Tell-Ask.” They ask the patient about their understanding of their disease or condition; tell him or her in straightforward, simple language about the bad news or treatment options; then ask if the patient understood what was just said.

Naito shared his experience with medical students in an OHSU course called “Living With Life-Threatening Illness,” which pairs students with ill and dying patients.

“He was able to talk very openly and quite calmly about his own experience,” said Amanda Ashley, associate director of OHSU’s Center for Ethics in Health Care. “He was able to do a lot of teaching about how it might have been different.”

Alyssa Hjelvik, 28, a first-year medical student, wound up spending hours more than required with Naito, learning about what it means to be a doctor — and what it means to die. The experience, she said, was “quite profound.”

“He impressed upon me that it’s so critical to be fully present and genuine,” said Hjelvik, who is considering a career as a cancer specialist. “It’s something he cultivated over several years in practice.”

Naito, who has endured 10 rounds of chemotherapy, recently granted the center $1 million from the foundation formed in his name. He said he hopes that future doctors like Hjelvik — and current colleagues — will use his experience to shape the way they deliver bad news.

“The more people know this, it doesn’t have to be something you dread,” he said. “I think we should remove that from medicine. It can be a really heartfelt, deep experience to tell someone this, to tell another human being.”