Political analysts say this week’s court decisions on the legality of tax subsidies for those obtaining coverage under the Affordable Care Act may not have a broad impact on this fall’s midterm elections.

The decisions sent a mixed legal message, complicating the political message as well. One appellate court panel ruled the subsidies cannot be provided in the 36 states relying on the federal insurance exchange; the other ruled in favor of the Obama administration, saying Congress intended that the subsidies be available regardless of whether states operated their own insurance marketplaces. 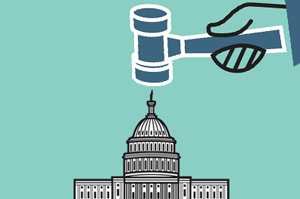 Political candidates as well as voters will have to wait until the outcome of appeals of the cases to know their impact. But that didn’t stop some politicians from trying to immediately exploit the issue, among them House Speaker John Boehner. He said Tuesday the ruling by the Court of Appeals for the District of Columbia that the health law prohibits subsidies in federally run exchanges is “further proof that President Obama’s health care law is completely unworkable. It cannot be fixed.”

While individual candidates may try to capitalize on the decisions, political analysts see difficulties for both parties.

It may be too late for the threat of millions of Americans losing health law subsidies to be a major issue in the fall elections, said Jim Manley, of Quinn Gillespie Public Affairs and a Democratic strategist.

“I’m not convinced it’s going have much impact either way. Republicans are entering dangerous ground again where they’re going to be in a position to be taking away people’s health care. But a final court decision won’t occur for a while,” Manley said. He thinks the focus of the elections will be on jobs and the economy, rather than the health law.

GOP strategist John Murray doubts that Democrats will be able to make much of the subsidy issue in the midterm elections, either. “We are within striking distance of the fall elections. The ability to take things like this and infuse them into the bloodstream of a campaign this late in the game – we’re basically in August – I think is wishful thinking for Democrats,” he said.

And Tony Carrk, of the liberal Center for American Progress, said it’s better for Democrats not to threaten Republicans, but to simply point out that the law is working. He said that particularly with the next open enrollment period starting just after the election, Democrats should “take any chance we can get to highlight what the law does, and who it impacts.”

On the other hand, should courts eventually rule that subsidies are not, in fact, permitted in the three dozen states whose exchanges are being run by the federal government, then all bets would be off, said those on both sides.

“Conservatives are putting themselves in a corner,” said Carrk. “Right now they’re rooting for the law to fail and for people to pay more for their health care.”

GOP strategist Feehery agreed that Republicans might not benefit if the lawsuit invalidating subsidies in federal exchange states eventually succeeds. In that case, he said, “Republicans might have to worry about being blamed for taking the subsidy away.”