Santiago Muldonado, 49, has no health insurance, and sometimes it worries him more than other times.

He went to the Zufall Health Center in Dover, N.J., recently to get treatment for a rash after over-the-counter creams failed to do the job. He’s hopeful the treatment will be straightforward and economical. Muldonado can handle a $35 out-of-pocket charge, despite being unemployed and keeping his family of five afloat on his wife’s $40,000 a year salary. 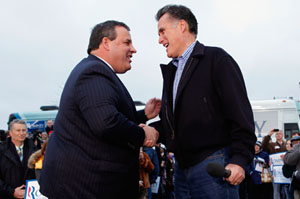 His own health doesn’t keep him up at night. What does is his wife’s knees.

“They’re getting more swollen every day, and she has to walk around a lot for her work,” Maldonado said. “This clinic doesn’t have an orthopedist, and if we go to a hospital, we know it’s going to cost a lot of money that we don’t have. So we keep waiting and hoping.”

While the family is poor enough to qualify his three children for government health insurance, his wife’s earnings as a parochial school administrator are too high to qualify the parents for Medicaid, so they’re among New Jersey’s 1.2 million uninsured.

As a way to reduce the number of uninsured, states are being encouraged to set more generous income limits for Medicaid as part of the Affordable Care Act. If states comply, they can get 100 percent federal funding in the first three years, declining to 90 percent funding over time. Typically, states and the federal government share the burden at a ratio that’s closer to 50-50.

The new funding might seem like an offer states can’t refuse, but several are, including Florida, Texas, Wisconsin and Arizona. And Gov. Chris Christie has hinted he wants to follow the lead of those states and their Republican governors, who believe the Medicaid expansion will end up costing states too much in the long run.

“Medicaid is pretty well expanded in our state already because of the legacy of previous Democratic governors,” Christie told Fox News’ “Fox and Friends” in July. “So, I don’t think there’s a lot for us to do in New Jersey in that regard.”

A spokesman for the governor said Christie supports GOP presidential candidate Mitt Romney’s position of “repealing and replacing” the Affordable Care Act, including the Medicaid expansion. Christie will likely wait for the outcome of the presidential election before making a decision.

Avik Roy, senior fellow at the Manhattan Institute, said Christie and other governors are right to think Medicaid expansion will be more expensive for cash-strapped state capitals than immediately meets the eye. Roy and some policy analysts believe expanding Medicaid would bring hundreds of thousands of people “out of the woodwork.”

“If New Jersey were to participate in the expansion, they would have these hidden costs from potentially enrolling a large chunk of people who are eligible for the existing Medicaid program, where the federal government isn’t backing that up with 100 percent funding,” he said.

But Joel Cantor, director of the Center for State Health Policy at Rutgers University, said those are people who should be using Medicaid anyway, and getting them into the system could ultimately lower their cost to the state while improving their health care by dealing with chronic illnesses before they become emergencies.

The Kaiser Family Foundation estimates accepting the Medicaid expansion would grow the program by 38 percent between 2014, when it kicks in, and 2019, while increasing state spending by only 1.2 percent. (Kaiser Health News is an editorially independent program of the foundation.)

Even if Romney wins the White House, he’s unlikely to get a filibuster-proof majority in the U.S. Senate to completely overturn the healthcare overhaul. If that’s the case, he’d have a number of options to delay implementation or offer his preferred solution – giving lump sums to states to administer Medicaid. Under some scenarios, he would need only simple majorities in both houses to withdraw the 90-100 percent funding offer.

Regardless of what happens on Nov. 6, Christie will soon turn his attention to his own re-election in 2013. And his political calculus may ultimately determine whether or not the governor will expand Medicaid under the ACA. Although Christie prides himself on taking politically unpopular positions, Fairleigh Dickinson University Professor Peter Woolley said Christie might think twice before turning down billions of dollars of federal aid.

“I think in this state, in this economic climate, it would be extremely difficult,” Woolley said. “It would open him up to sustained criticism from the other side.”

Christie may be looking beyond the Garden State, as well. Professor Brigid Harrison, from Montclair State University, said Christie’s political balancing act will be more challenging in 2013 than it was in 2010, when he canceled the $11 billion ARC Tunnel, most of whose funding came from Washington.

Harrison said what Christie does on Medicaid expansion, post-election, will say a lot about how he’s positioning himself.

“On the one hand, he needs to placate a constituency within the State of New Jersey that tends to be a bit more moderate than he has been so far in his administration,” Harrison said. “But he needs to balance this with his rather unabashed desire to make a name for himself nationally, particularly as a potential nominee for the Republican Party presidential nomination in 2016.”

Less than 10 miles from Christie’s hometown of Mendham Township, the Zufall Health Center, in Dover, sees 15,000 patients a year, about two-thirds of whom have no insurance. The other third are mostly on Medicaid. Eva Turbiner, director of the federally qualified health center, estimates Medicaid expansion would bring coverage to about 3,000 of those patients.

“They would like to be on Medicaid,” she said.

Not that Medicaid is a silver bullet, Turbiner said. It doesn’t pay providers enough to cover the actual cost of treating patients, and the non-profit health center has to raise money to make up the difference.  But the rate is still better than what the clinic gets for patients through state and federal charity care dollars.

Another problem, Turbiner said, is that Medicaid pays doctors so badly that few specialists take it, whether they’re based in a hospital or in their own private practice – and that’s not likely to change under the Affordable Care Act.

So when patients need a cardiologist or gastroenterologist, they don’t have many options. They can make long trips from Morris County to state hospitals in Newark and New Brunswick, where there are long waiting times for appointments. Or they can go to a local hospital and try to negotiate a price for charity care.

That’s what Santiago Maldonado is looking at for his wife.