Back in March, just as anxiety over COVID-19 began spreading across the U.S., Erinn Baldeschwiler of La Conner, Washington, found herself facing her own private dread.

Just 48 and the mother of two teenagers, Baldeschwiler was diagnosed with stage 4 metastatic breast cancer after discovering a small lump on her chest, no bigger than a pea. Within weeks, it was the size of a golf ball, angry and red. Doctors gave her two years to live.

“It’s heartbreaking,” she said. “Frankly, I was terrified.”

But instead of retreating into her illness, Baldeschwiler is pouring energy into a new effort to help dying patients gain legal access to psilocybin — the mind-altering compound found in so-called magic mushrooms — to ease their psychic pain.

“I have personally struggled with depression, anxiety, anger,” Baldeschwiler said. “This therapy is designed to really dive in and release these negative fears and shadows.”

They contend that psilocybin — whether found in psychedelic mushrooms or synthetic copies — meets the criteria for use laid out by more than 40 states and the 2017 Right to Try Act approved by the Trump administration.

“Can you look at the statute and see by its terms that it applies to psilocybin?” Tucker said. “I think the answer is yes.”

Still, the pair admit they’re pushing a legal theory still untested in the courts. “This is untrodden ground,” Aggarwal said.

This month, Aggarwal, who works at the Advanced Integrative Medical Science Institute, known as AIMS, took the first step toward federal authorization of the substance in Washington state and perhaps across the nation. He submitted an application to manufacture psilocybin to the state’s Pharmacy Quality Assurance Commission, which would allow him to grow psilocybin mushrooms from spores at his clinic and administer them for therapeutic use.

Commission members haven’t yet reviewed the application, but Gordon MacCracken, an agency spokesperson, said there “would be a path” for possible license and use — if the application meets the requirements of state regulators and the federal Drug Enforcement Administration.

Currently, psilocybin use is illegal under federal law, classified as a Schedule 1 drug under the U.S. Controlled Substances Act, which applies to chemicals and substances with no accepted medical use and a high potential for abuse, such as heroin and LSD.

Recently, however, several U.S. cities and states have voted to decriminalize possession of small amounts of psilocybin. This month, Oregon became the first state to legalize psilocybin for regulated use in treating intractable mental health problems. The first patients will have access beginning in January 2023.

It’s part of a wider movement to rekindle acceptance of psilocybin, which was among psychedelic drugs vilified — and ultimately banned — after the legendary counterculture excesses of the 1960s and 1970s.

“I think a lot of those demons, those fears, have been metabolized in the 50 years since then,” Aggarwal said. “Not completely, but we’ve moved it along so that it’s safe to try again.”

He points to a growing body of evidence that finds that psilocybin can have significant and lasting effects on psychological distress. The Johns Hopkins Center for Psychedelic and Consciousness Research, launched this year, has published dozens of peer-reviewed studies based on two decades of research. They include studies confirming that psilocybin helped patients grappling with major depressive disorder, thoughts of suicide and the emotional repercussions of a cancer diagnosis.

Psilocybin therapy appears to work by chemically altering brain function in a way that temporarily affects a person’s ego, or sense of self. In essence, it plays on the out-of-body experiences made famous in portrayals of America’s psychedelic ’60s.

By getting out of their heads — and separating from all the fear and emotion surrounding death — people experience “being” as something distinct from their physical forms. That leads to a fundamental shift in perspective, said Dr. Ira Byock, a palliative care specialist and medical officer for the Institute for Human Caring at Providence St. Joseph Health.

“Along with that shift in perspective, there is very commonly a notable dissolution of the fear of dying, of nonexistence and of loss, and that’s just remarkable.”

The key is to offer the drugs under controlled conditions, in a quiet room supervised by a trained guide, Byock said. “It turned out they are exceedingly safe when used in a carefully screened, carefully guided situation with trained therapists,” he said. “Almost the opposite is true when used in an unprepared, unscreened population.” 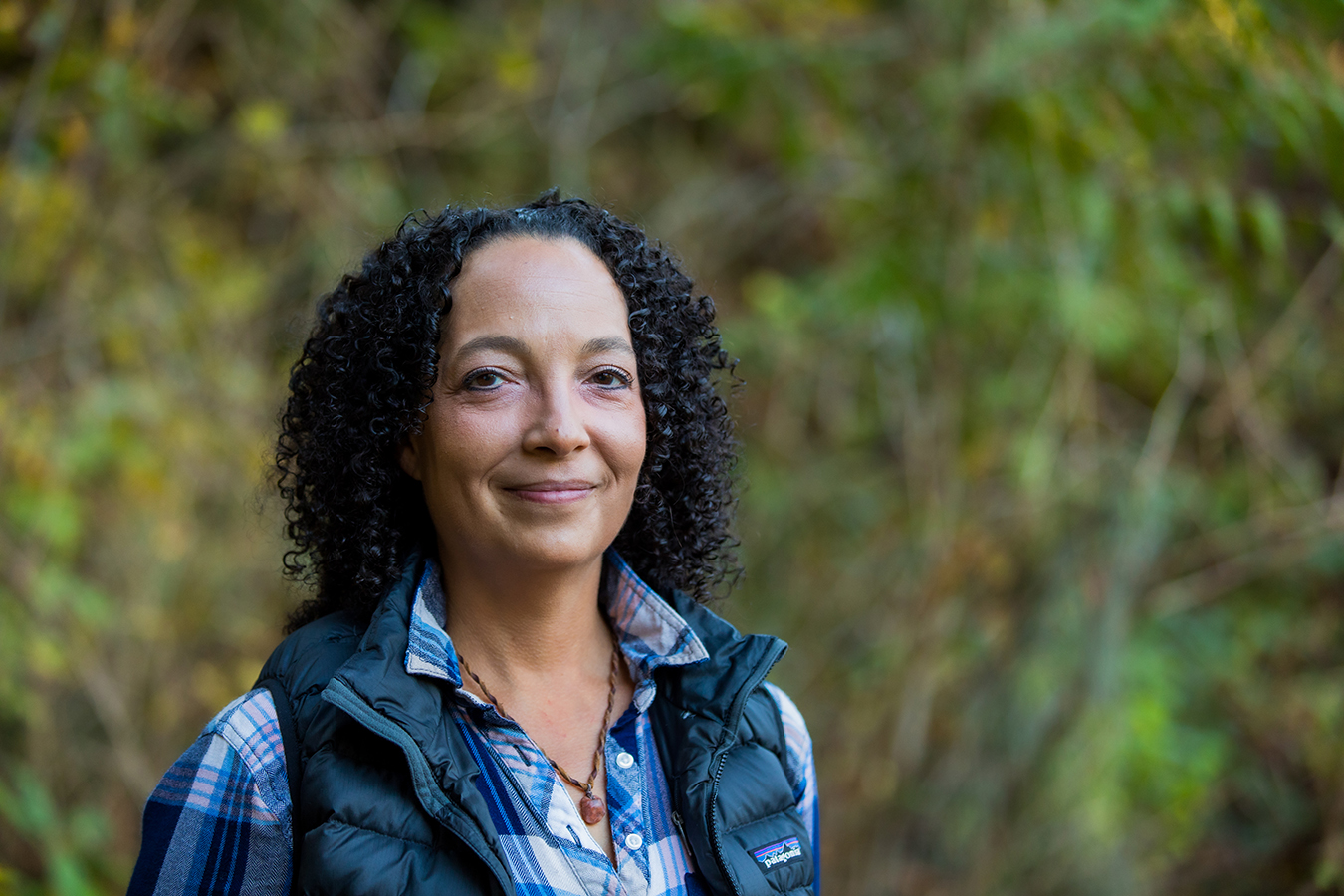 Baldeschwiler is one of many cancer patients eager to undergo psilocybin therapy to help quell the psychic pain that can accompany a terminal illness. Advocates say the therapy appears to work by temporarily altering brain function in a way that affects a person’s sense of self, helping them separate from the fear and emotion surrounding death.(Dan DeLong for KHN )

Baldeschwiler is one of several AIMS cancer patients eager to undergo psilocybin therapy. Another is Michal Bloom, 64, of Seattle, who was diagnosed in 2017 with stage 3 ovarian cancer. The anxiety of living with the terminal disease is overwhelming, she said.

Research shows that a single six-hour session of psilocybin therapy may be enough to quell that fear, Aggarwal said. “I’m really interested in a right-to-try approach because it’s really what we need for patients right now,” he said.

Under the state and federal laws, to be eligible for “right-to-try” status, a treatment must have completed a phase 1 clinical trial approved by the federal Food and Drug Administration, be part of active clinical trials and in ongoing development or production.

So far, psilocybin ticks all those boxes, Tucker said.

The FDA has granted “breakthrough therapy” status to psilocybin for use in U.S. clinical trials conducted by Compass Pathways, a psychedelic research group in Britain, and by the Usona Institute, a nonprofit medical research group in Wisconsin. More than three dozen trials are recruiting participants or completed, federal records show.

But access to the drug remains a hurdle. Though psychedelic mushrooms grow wild in the Pacific Northwest and underground sources of the drug are available, finding a legal supply is nearly impossible.

Tucker and Aggarwal asked Usona last summer for a supply of the synthetic psilocybin its researchers produce for clinical trials, but so far have received nothing. Penny Patterson, a Usona spokesperson, said there’s been no “definitive resolution” and that conversations are continuing.

The firm’s reluctance may reflect a larger unease with employing right-to-try laws to speed use of psilocybin, said Dr. Anthony Back, a palliative care physician at the University of Washington.

Back supports the use of psilocybin for cancer patients and has even tried the drug to better understand the experience. But he said using psilocybin outside of formal clinical trials might endanger Usona’s ability to get traditional FDA approval. Adverse events may occur that will have to be reported to the FDA, an agency already watching the research closely.

“I can see why they’re hesitant, to be honest,” Back said. “I think right-to-try is an uphill battle.”

Still, Tucker and other advocates say it’s a battle worth fighting. End of Life Washington, a group focused on helping terminally ill patients use the state’s Death With Dignity Act, recently published a policy that supports psilocybin therapy as a form of palliative care. Other treatments for anxiety and depression, such as medication and counseling, may simply not be practical or effective at that point, said Judith Gordon, a psychologist and member of the group’s board of directors.

“When people are dying, they don’t have the time or the energy to do a lot of psychotherapy,” she said.

Baldeschwiler agrees. With perhaps less than two years to live, she wants access to any tool that can ease her pain. Immunotherapy has helped with the physical symptoms, dramatically shrinking the size of the tumor on her chest. Harder to treat has been the gnawing anxiety that she won’t see her 16-year-old daughter, Shea McGinnis, and 13-year-old son, Gibson McGinnis, become adults.

“They are beautiful children, good spirits,” she said. “To know I might not be around for them sucks. It’s really hard.”