Retail clinics are spreading across the country, offering their services at an increasing number of locations in stores and business offices. But a just-opened clinic at the University of Notre Dame could signal a new direction: setting up shop at academic centers. 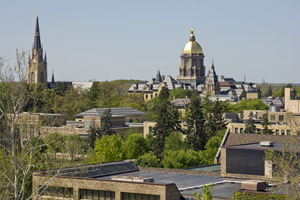 This wellness center is the first of its kind, said Notre Dame spokesman Dennis Brown, and helps fill a niche because the institution does not have a medical school or hospital of its own.

Take Care runs nearly 370 of these employer-based health centers nationwide. Nearly 12,000 people are expected to be served at the Notre Dame center, with the clinic limited to serving full-time faculty and staff, and their spouses and dependents. Spouses and dependents of graduate students will also have access. Graduate students, along with undergraduates, will continue to receive services at the on-campus student health center.

According to Brown, the Notre Dame center will provide an on-campus option for those who previously had to seek primary care elsewhere in South Bend, Ind. Also, a full-service Walgreens pharmacy housed by the wellness center will offer over-the-counter medications at a 15 to 20 percent discount compared to other Walgreens stores. The pharmacy also fills prescriptions.

There lies a wrinkle. While most full-service pharmacies provide contraception to their customers, this Walgreens will not, in accordance with Notre Dame and its religious beliefs.

“We have a contract with Walgreens that they follow our medical plan requirements and do not provide contraception, except when there is a medical need not related to birth control,” Brown said.

The contract stipulation comes on the heels of Notre Dame’s very public disagreement with the Obama administration regarding its contraception mandate, which requires employers’ insurance plans to cover birth control for women without a copayment. In May, the university and 42 other groups filed suit over this requirement because it conflicts with religious teachings against the use of contraception and, they said, violates religious freedom.  The groups rejected a compromise in which the insurer – not the employer – would pay for and administer birth control.

Meanwhile, Walgreens has, in recent years, said that it will ensure access to emergency contraception at its pharmacies, as well as potentially deliver a prescription contraception from another pharmacist if one pharmacist refuses to provide it. Walgreens did not provide a comment on its current policies and its arrangement with Notre Dame.

The National Women’s Law Center notes that Indiana is not one of the few states that requires pharmacists to provide access to birth control or allows pharmacists to refuse access based on their religious or moral beliefs.