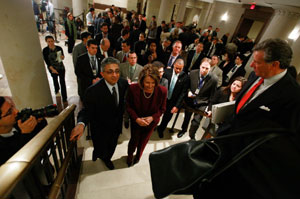 Rep. Nancy Pelosi, D-Calif., walks out of January’s Democratic Caucus meeting on health reform. Democrats are showing increasing resolve to pass legislation using a maneuver known as reconciliation. But first, Democrats need to settle disputes within their own party over a handful of reform issues. (Mark Wilson/Getty Images)

Congressional Republicans are scheduled to join President Obama and Democratic leaders Thursday for a six-hour televised summit on the White House’s stalled drive for a national health care overhaul.

But it’s increasingly clear that the only bipartisan compromise expected to emerge at Blair House is over who gets to sit where at the big table.

Indeed, the compromise that most of Washington is focused on now will be post-summit – and within the ranks of a fractious Democratic caucus that’s trying to navigate a route to health care legislation.

After all, Republicans have doubled down on their criticism of the Democrats’ initiatives and continued calls for a complete legislative do-over. Meanwhile, Democrats are showing increasing resolve to push their legislation through with a maneuver known as reconciliation that would require no GOP votes, just simple majorities in the Senate and House.

But before that can happen, Democrats need to resolve bitter disputes within their own party over a handful of overhaul issues. The major areas of intracaucus contention include not only abortion and benefit plan taxes, but the process of reconciliation itself. Here’s a breakdown of some of the key sticking points:

Abortion: What would a health care debate be if it didn’t include a battle over abortion? The House bill carries a provision pushed by about a dozen anti-abortion Democrats – and excoriated by pro-choice members – that would prevent individuals from using federal subsidies to buy insurance plans that offer abortion coverage.

The Senate bill would allow subsidies to be spent on insurance plans that include abortion coverage. But women would be required to personally pay the company for the specific cost of abortion coverage. (Federal law restricts public funding for abortion.)

Budget Reconciliation: Reconciliation is a parliamentary procedure that allows legislation written as a budget bill to pass through the Senate with a simple majority, preventing minority party filibuster. Once seen as a distant and not-very-palatable option to use to pass comprehensive health care, Democrats – including Majority Whip Dick Durbin of Illinois – have said that Senate leaders are preparing to use the maneuver. A number of Democrats facing re-election in the fall have resisted the path, fearing a backlash at the polls.

But many Democratic skeptics began warming to the notion after Democrats lost their 60-vote Senate supermajority when Republican Scott Brown was elected in Massachusetts. However, the use of reconciliation still needs to be sold – particularly to moderate House members – and it must be done at a time when Republicans have ratcheted up rhetoric surrounding the procedure, used by both parties in the past.

Public Option: A public insurance option is one created by the government and offered to the uninsured as an alternative to private coverage. Though declared dead by the White House, the public option contained in the House bill still has its dogged advocates in the Democratic caucus.

To wit: Twenty-three senators signed a letter urging party leaders to include the option in a reconciliation bill. But when Pelosi, a longtime supporter, acknowledges there aren’t enough Democratic votes in the Senate to pass a public option, the give-and-take may simply give succor to the party’s liberals, but it won’t end in compromise.

Cadillac Tax: Labor unions were furious when the Senate approved a version of the health overhaul bill that included a tax on high-cost insurance plans – including those often awarded in collective bargaining. House leaders were none too pleased, either.

So when Obama unveiled his plan this week, presto! Under his proposal, the tax would be delayed until 2018, and he also bumped up the value of plans that would be taxed – benefiting both union and nonunion holders of benefits-rich plans.

But House Democrats want the tax provision excised from the Senate bill, which forms the basis of the reconciliation legislation, before it comes to the House for a vote – and that could complicate its path. Republican Sen. Judd Gregg has asserted that if the Senate legislation is altered, it would have to be put to a new vote in the chamber.