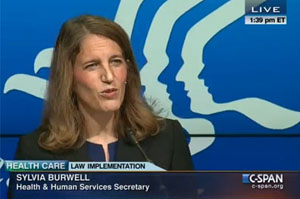 When the marketplace enrollment reopens in November, 77 new insurers will be offering coverage in the 44 states for which HHS had data, which includes the 36 states that use the federal marketplace and eight states that run their own, the department reported.

The number of competitors on the marketplaces is considered important because it signifies the vitality of the exchange and can mean increased competition and lower prices for consumers. It also means that insurers see the health law’s online marketplaces or exchanges, as a good business opportunity, senior HHS officials said.

Nine insurers that offered coverage in the federal marketplaces and four that offered plans in the state exchanges for 2014 won’t do so again in 2015, but most of those insurers’ parent companies will be active in the respective states’ exchanges, according to the report.

In her remarks at the Brookings Institution Tuesday, Burwell said, her first priority “is improving access and affordability through the marketplace. In order to make sure that Americans continue to access affordable choices, we have to get HealthCare.gov right.” Problems with the website botched last year’s open enrollment.

According to the HHS figures, in 2014, 191 issuers offered plans in the 36 states using the federal marketplace. Preliminary reports indicated that 249 issuers will be in those states on the federal marketplace in the 2015 enrollment season, which begins Nov. 15. In the eight state exchanges, 67 insurers will offer plans, compared to 61 in 2014.

Senior HHS officials could not elaborate on what “tiers” of coverage the new entrants would offer or how much that coverage would cost. The report also does not say in which counties the insurers will offer coverage, a factor that would directly influence the level of competition in coverage and price. Typically, most insurers don’t serve every county in states they operate in.

Burwell sought to cast the increase as one of a number of recent announcements suggesting that the 2010 health law has been successful in improving health care options for Americans.  She pointed to figures announced last week that 7.3 million people who signed up for the exchanges and paid their premiums, findings that HHS released Monday that 8 million people enrolled in Medicaid or the Children’s Health Insurance Program since the beginning of open enrollment last year, and a 26 percent reduction of uninsured adults.

“I think we need a bit of a course correction in this country when it comes to how we talk about these issues — and it starts with collectively turning down the volume a bit,” she said. “Surely, we’d all agree that the back-and-forth hasn’t been particularly helpful to anyone — least of all the hardworking families who we all want to help.”

She also said that backers of the law “haven’t done a very good job of explaining why middle-class families who already had insurance are better off.” Families are paying less for coverage, Burwell said, and they benefit from knowing they “no longer have to worry about losing their homes or having their hard-earned savings wiped-out by an accident, or unexpected diagnosis.”