There are no doctors in rural Tyrrell County, N.C. There is only Irene Cavall, a licensed nurse practitioner and the sole source of primary care for 4,000 residents spread out over 600 square miles.

It’s been that way since the county’s lone doctor moved away 2 ½ years ago. Cavall sees as many as 40 patients a day at the Columbia Medical Center. It’s about 40 miles west of the Outer Banks; an ambulance ride to the nearest hospital takes 25 minutes. 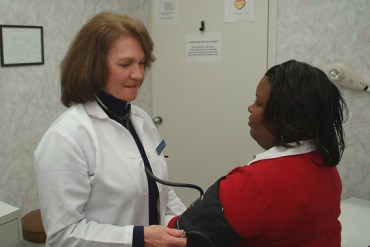 There are limitations to her work  by state law, she works under the supervision of a doctor, albeit one many miles away, and calls him and specialists as needed. But for 15 years, Cavall has been helping patients with a range of routine problems, from colds to management of diabetes, that don’t always require a doctor. As she says, doctors “don’t need to give someone a Tylenol.”

Nursing leaders say large numbers of practitioners like Cavall will be needed to fill gaps in primary care left by an increasing shortage of doctors, a problem that would intensify if Congress extends health insurance to millions more Americans. Advocates say nurse practitioners have the extra education and training needed to perform a variety of services, including physical exams, diagnosis and treatment of common ailments and prescribing drugs.

But the American Medical Association and doctors’ groups at the state level have been urging state legislators and licensing authorities to move cautiously, arguing that patient care could be compromised. This battle has been waged for years, even as nurse practitioners grew rapidly in number – there are 125,000 or more – and expanded their responsibilities. What’s different now is the increasing conflict as pressure grows to use nurse practitioners and other so-called physician extenders, including physician assistants, certified nurse midwives and pharmacists. The Association of American Medical Colleges estimates that there will be a shortfall of as many as 46,000 primary care doctors by 2025.

The American Medical Association sparked harsh criticism from nursing groups when it released a report in October bluntly questioning whether nurse practitioners “are adequately trained to provide appropriate care.” To back up its claims, the report cites recent studies that question the prescription methods of some nurse practitioners, as well as a survey that reported only 10 percent of nurse practitioners questioned felt well prepared to practice primary care.

The nation’s largest doctors’ group concluded: “The time is ripe for legislators, health care policy analysts and nurses to thoroughly assess the quality of NP training in relation to the scope-of-practice expansions sought at the state level.”

Responding to the AMA in December, the American Nurses Association and more than two dozen other nurses’ organizations termed the report “misleading,” saying it “contains numerous factual misrepresentations.” Their letter rebuked the AMA for its “attempt to change the perceptions of NP practice as anything other than fully qualified professionals working within a legally established scope of practice.”

The president of the American Society of Anesthesiologists says the key issue is supervision “We understand that in most fields of medicine, non-physician providers play an important role and they certainly have in anesthesia for more than a century,” says Dr. Alex Hannenberg, who practices in the Boston area. “The safest and high quality care requires that a physician be providing oversight of the nurse practitioner.”

Debate over national health overhaul legislation has heightened the sense of urgency about primary care and given nurses ammunition for their argument. “The biggest group of clinicians that will be in shortage with universal (insurance) coverage will be those who provide primary care – and that’s what nurse practitioners are so extraordinarily good at,” says Mary Mundinger, dean of the Columbia University School of Nursing.

There is precedent: Massachusetts’ 2008 health insurance overhaul recognized the 5,600 nurse practitioners as primary care providers who would be reimbursed through private insurance and Medicaid at the same rates as doctors. The nurses, however, must work under written protocols that designate a physician who can provide medical direction.

Nurse practitioners are gaining support. In a Jan. 14 report, the Center for American Progress, a liberal think tank, said maximizing use of the “entire health care workforce” would also “increase quality while decreasing costs.” Ellen-Marie Whelan, senior health policy analyst at the center, said in an interview that nurses “should be part of managing chronic illness, helping a patient navigate the system, helping coordinate among providers.”

“The fear that there’s a safety concern, I think we just have to look at the evidence, look at the numbers,” Whelan said. “Nurse practitioners have been trained to know where their limit is. Since the beginning – now it’s been over 40 years – there’s just been so much evidence to say that there’s nothing to fear and in many cases, there’s higher quality.”

In September, the nonpartisan Brookings Institution’s Engelberg Center for Health Care Reform issued a report by 10 experts that said one way to curb health care spending is to encourage states to permit “greater use of nurse practitioners, pharmacists, physician assistants, and community health workers.” Meanwhile, a blue-ribbon committee working under the aegis of the Institute of Medicine and Robert Wood Johnson Foundation is planning to make extensive recommendations later this year on the future of nursing.

Nurse practitioners started out decades ago under close supervision of physicians, with tight restrictions on what they could do. But nurses have successfully pushed state licensing agencies and legislatures to grant them more autonomy and broader duties. The AMA report said, for example, “all states now allow NPs some degree of prescribing privileges,” and 12 have granted them authority to prescribe medicine independent of doctor oversight.

This year, several states are considering laws to restrict or expand nurses’ scope of practice. For example, in Colorado, one bill would allow advanced practice nurses in addition to physicians to issue medical orders that direct a patient’s care at any facility. Another bill there would eliminate a nurse’s right to declare a patient terminally ill.

Most states require nurse practitioners to obtain a master’s degree in nursing, but education and training requirements vary. Cavall, 60, has a master’s, and, prior to becoming a nurse practitioner, she was a registered nurse for several years. She feels very qualified to take care of patients in Tyrrell County. “If you come from a background where you’ve seen just about everything, that gives you a really good basis for delivering that care,” she says.