Think dangerous jobs, and a police officer entering a dark hallway or a firefighter running into a burning building might come to mind. But even more risky? Nursing aides, who have an occupation with the nation’s second highest rate of work-related injuries or illness. 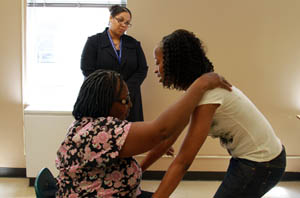 Francess Sillah learns how to safely transfer Tanya Pittman out of an imaginary wheel chair while role playing during a group interview at Health Management Inc. (Photo by Jessica Marcy/KHN).

Nursing aides and other health care workers can slip or fall or strain themselves trying to lift people or equipment. They also face unique hazards such as workplace violence, exposure to “bloodborne pathogens,” infectious diseases such as tuberculosis or dangerous chemicals and drugs.

The U.S. Department of Labor’s Occupational Safety and Health Administration wants to do something to make the jobs safer.  OSHA has a new program, the National Emphasis Program for Nursing and Residential Care Facilities, which calls for increased outreach efforts and a rise in inspections of on-the-job hazards. The Labor Department says they will initially target facilities that have a ratio of days-away-from-work of 10 or higher per 100 full time workers.

Nursing aides, orderlies and attendants suffer a higher rate of work-related injuries or illnesses than even “hand laborers and freight, stock and material movers.” In 2010, work-related injuries and illness was 2.3 times higher in the nursing and residential care sector than all private industry overall, according to the Bureau of Labor Statistics.

“These are people who have dedicated their lives to caring for our loved ones when they are not well. It is not acceptable that they continue to get hurt at such high rates,” said Dr. David Michaels, assistant secretary of labor for occupational safety and health, in a prepared statement.

The new program plans to offer specific guidance on ergonomics and workplace violence, according to OSHA.

“We’re really glad they’re doing it,” said Carol Regan, director of government affairs at PHI National, an advocacy group for direct care workers. “This has been a long-time coming because we’ve been concerned about the lack of standards for this industry.”

While many workers advocates and unions have welcomed the new program, some believe more should be done for home-based direct care workers.

“Home care workers are really susceptible because they’re on their own, they’re in people’s houses, they often don’t have supervisors right there,” Regan said. She added that she hopes OSHA will extend such efforts to better train direct care workers about risks in the homes but says that since she recognizes that it will be nearly impossible for OSHA to inspect personal homes, she hopes they will emphasize better training.