Three weeks after Hurricane Sandy, four New York City hospitals remain closed for inpatients, leaving thousands of patients scrambling to find other medical centers to treat everything from broken bones to brain cancer. The closures of NYU Langone Medical Center, Bellevue Hospital Center, the Manhattan VA Medical Center, and Coney Island Hospital have meant more business for some nearby hospitals and an unwelcome extra burden for others. 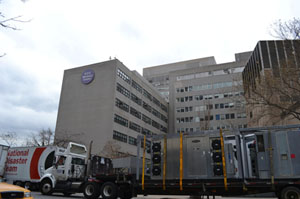 Generators sit outside the NYU Medical Center after the Sandy superstorm on Oct. 31 (Photo by Matt Kane via Flickr).

St. Luke’s-Roosevelt Hospital is in the former group. When the hospital, near Columbus Circle in Manhattan,  opened a $21 million cardiac electrophysiology center in September, officials figured it would take months to build up enough patients to reach full capacity. The center’s state-of-the-art equipment helps doctors recalibrate faulty electrical impulses in the heart that cause arrhythmia. Before Sandy, there were about a dozen procedures a week, but now that displaced NYU doctors and patients are coming to St. Luke’s-Roosevelt, there are about 18 a week. Dr. Emad Aziz says that’s a big jump in a short amount of time, particularly for a complicated and expensive procedure that can take up to eight hours.

“We really wanted to accommodate them,” Aziz said. “And it turned out to be really nice. It’s a great opportunity on a personal level, to assist them in a time when they have that big damage.”

Of course, the closures have been a big problem for many patients and hospitals, too.

Eileen Wal, of Atlanta, is a breast cancer patient who planned to fly to New York next month for reconstructive surgery at NYU. After Sandy, her surgeon, Dr. Robert Allen, has nowhere else to operate locally. He also practices at Manhattan’s Eye and Ear Infirmary, but that hospital has been filled to capacity, thanks to the cascading effects of Sandy.

“They have no O.R. time available,” Wal said. “Now some may pop up, but if it does it would only be very last-minute. So the only people who could take advantage of it would be someone who’s local to New York.”

Fortunately for Wal, her surgeon spends half his time working and teaching at Ochsner Baptist Medical Center in New Orleans, so she can go there for the operation. But she’s not looking forward to spending time in The Big Easy.

“The surgery in New York was far easier for me logistically,” Wal said. “One, it has public transport, and, two, you walk out of your door of where you are, and you have food. You don’t have to deal with anything. It’s all very simple. New Orleans, basically, there’s nothing there. [The hospital] in the middle of nowhere.”

When it’s up and running, NYU performs about 2,700 inpatient procedures a month. Officials haven’t estimated how long Tisch Hospital, the core facility, will remain closed, but other medical centers are bracing for it to be months.

Lenox Hill Hospital, on the Upper East Side, was operating well under capacity before Sandy. It has about 600 beds, and daily occupancy was running “in the mid-400s,” according to Dr. Arthur Klein, regional executive director for North Shore-Long Island Jewish, Lenox Hill’s parent system. Since Sandy, there are about 100 additional inpatients a day, and the operating rooms stay booked well into the evening and on weekends. Lenox Hill, which has struggled financially, has fast-tracked admitting credentials to about 300 NYU doctors and is additionally employing close to 500 NYU nurses.

Nearby New York-Presbyterian/Weill Cornell Medical Center is not so eager to take on more patients and isn’t credentialing NYU doctors. The CEO, Dr. Steven Corwin, says his hospital can barely keep pace with the increased number of people coming into the emergency room. And he’s concerned about what might happen in the event of a big public health crisis.

“If we were to have a significant flu season over the winter time, that would further hamper our ability to respond,” Corwin said.

Of the four closed hospitals, only NYU lacks a network and sister institutions to place patients. The Manhattan VA has transferred most of its inpatients to the Brooklyn VA.

Bellevue, the largest shuttered facility, and Coney Island are part of the city’s Health and Hospitals Corporation, with nine other hospitals. Coney Island Hospital has recently reopened for 24-hour urgent care, specialty clinics and primary care clinics but its inpatient operation is still closed. Bellevue is planning to reopen “limited primary care outpatient services” on Monday, according to its website.

By all indications, the placement of NYU patients to other institutions has been piecemeal.

“I would’ve thought in this sort of situation that maybe FEMA or the [NYC Office of Emergency Management] would go straight in and look at the hospitals that are closed, grid out the patients, look at the potential services in a reasonable surrounding area, and put out suggestions based on that,” said Mike McCarry, head of perioperative services for Mt. Sinai Medical Center. “Maybe that’s happening, but if it is, it isn’t visible.”

Several of the hospitals taking in Sandy evacuees initially reported losing millions of dollars – with much of the shortfall the result of taking in Medicaid and uninsured patients from Bellevue and, in some cases, displaced nursing home residents.

But in the months ahead, those hospitals that take on NYU patients needing high-end inpatient procedures are likely to see a temporary surge in profits – and possibly win new long-term patients. And they could see millions of dollars a month they would not get, if NYU were open.