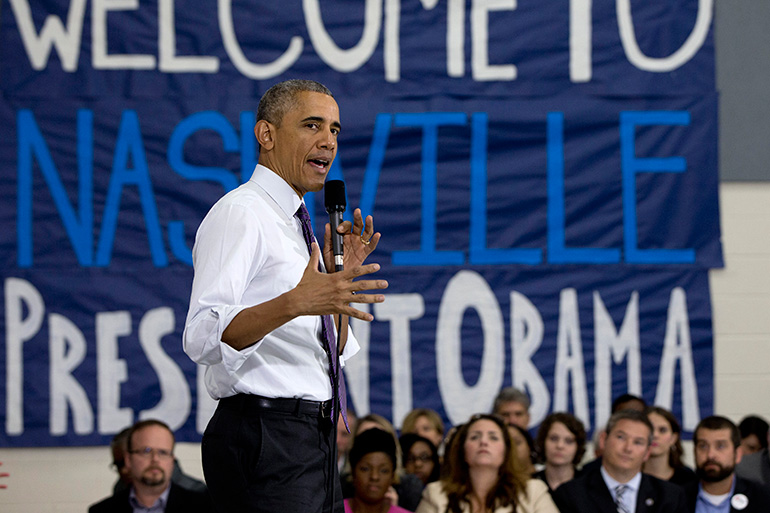 President Barack Obama called on Republicans Wednesday to find a bipartisan way to fix problems in the nation’s health care system rather than continue to fight over the health law.

“Part of what I’m hoping is with the Supreme Court case now behind us what we can do is … focus on how we can make it even better because it’s not as if we’ve solved all the problems in our health care system,” Obama said in remarks at an elementary school in Nashville, Tenn. “America still spends more on health care than any other advanced nation and our outcomes aren’t particularly better.”

In a 6-3 ruling, the high court last week rejected a challenge that would have ended federal premium subsidies in at least 34 states for individuals and families buying insurance through the federal government’s online marketplace. Such a result would have made coverage unaffordable for millions and created price spirals for those who kept their policies, many experts predicted.

While the president’s law survived its second Supreme Court test in three years, the decision by no means has ended the legal and political assaults from opponents. Several GOP presidential hopefuls and House Speaker John Boehner, R-Ohio, among others, have continued to call for the law’s repeal.

Tennessee Rep. Diane Black, a Republican, took a swipe at the law and the president’s visit, suggesting that Obamacare was putting “the squeeze” on families in her district. She noted that the state’s largest insurer, BlueCross BlueShield, is requesting a “whooping 36 percent rate hike” on the health law’s exchange next year “despite the president’s repeated promise that this law would save Americans an average of $2,500 per family, per year.”

In his remarks, the president said a lot of waste remains in the nation’s health care system and quality “isn’t always where it needs to be,” he said. “So my hope is that on a bipartisan basis, in places like Tennessee but all across the country, we can now focus on what have we learned? What’s working? What’s not working?”

Obama’s appearance Wednesday was part of a renewed focus on states such as Tennessee that have not expanded Medicaid, the shared federal-state health insurance program for low-income residents. Under the law, states have the option to expand Medicaid eligibility to individuals who earn about $16,000 a year — with the federal government covering much of the cost. But 21 states have not done so because of political opposition to the law.

Federal officials and health law supporters see Tennessee as a state that might move off that list. Gov. Bill Haslam, a Republican, proposed a program called Insure Tennessee that would use the federal Medicaid expansion funding to help provide insurance to 288,000 low-income Tennesseans. The plan was twice defeated in state Senate committees. Following the court decision, advocates have called for the governor to renew his efforts to pass the plan.

“There’s something that can be done but it’s going to be at the state level,” Obama said to an audience question on the issue, urging lawmakers to find “a uniquely Tennessee solution to the problem. … It is unfortunate that getting this thing done got so political. Washington is kind of a crazy place. But that doesn’t mean that every place has got to be crazy.”

Yet national poll results show the American public remains split over the health law. A Kaiser Family Foundation poll released Wednesday found 43 percent supporting the law and 40 percent in opposition, much as it has been for the past several months. (KHN is an editorially independent program of the foundation).

That split, however, does not extend to views about the court decision, however. Six out of 10 people questioned said they approved of the Supreme Court’s decision to uphold the law’s subsidies in both state and federally run exchanges, or marketplaces, while about a third disapproved. Even among Republicans and those who dislike the law, about 3 in 10 say they backed the ruling.

The tracking poll was conducted from June 25 through June 29 among 1,202 adults ages 18 and older. The margin of error for questions of the overall public is +/- 3 percentage points.

After Court Victory, Obama Asks GOP To Work With Him To Improve Health Care