President Barack Obama’s pledge to Americans that they could keep their health plans if they liked them began to backfire last month. 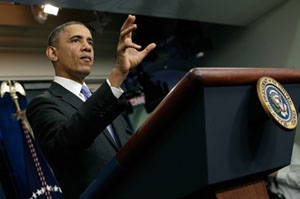 Obama eventually apologized. On Thursday he offered what he called “an idea that will help” fix the problem, allowing insurers to renew existing plans even if they don’t include the full menu of health-law benefits.

But it’s far from clear that insurers will want to follow through. Some state regulators may not even let them. Consumers — many already confused — just got new information to process. And some in the industry say Obama’s solution may create new problems.

Q: What did Obama propose?

A: He’s allowing insurers to extend existing plans for one more year for current customers. Policies renewing before the end of this year would last until late 2014. Policies that expire in 2014 would be permitted to extend into 2015. In many cases the existing plans have been less expensive than policies with more benefits scheduled to take effect next year.

If carriers do renew, they must disclose the shortfall between the benefits of the existing plan and benefits required by the Affordable Care Act. It’s possible the insurers will charge more for these renewed policies.

Q: Who is affected?

A: The proposed change affects individuals and families who buy plans directly from insurers and received cancellation notices in recent weeks. The administration is also allowing extension of small-employer plans that didn’t meet ACA requirements.

If you aren’t already covered by a noncompliant plan you can’t buy in now. Consumers covered by Medicaid, Medicare or large employers are unaffected.

Q: How are consumers reacting? What should they do if they got a cancellation notice?

A: At least some canceled insurance customers applauded Obama’s announcement.

“That’s amazing. I look forward to hearing from Blue Cross about that,” said Paige Smith, 63, of Florence, Ala., who got a cancellation notice from BlueCross BlueShield of Alabama in October.

Advocates say consumers should check with their insurer to see if it will be renewing canceled policies. Even if it is, consumers, especially those with chronic illness, should review alternatives offered in the health law’s online marketplaces to see if they offer better coverage.

Insurance sold through the marketplaces also comes with substantial government subsidies for those who qualify. By contrast, the noncompliant plans Obama is allowing to be stretched into next year are not eligible for subsidies.

Q. Who decides whether I can renew a policy slated for cancellation?

A. Insurers and state regulators. Neither Obama nor the federal Department of Health and Human Services can force extension of the plans.

But the administration did set rules: If insurers renew policies – and their state allows it – they must notify consumers and point out that they may find other options and subsidies through the online marketplaces.

Q: How have insurers reacted?

A: Many wanted to learn more details about Obama’s offer. BlueCross BlueShield of North Carolina, which was canceling about 200,000 individual policies at end of the year, said it was interested in the option but not ready to commit.

Florida Blue says it will allow customers to renew 2013 policies, a decision that could affect as many as 300,000 people over the next year and immediately affects 40,000 people who were losing their existing plan at end of this year.

Some insurers are urging state regulators to disallow the extensions. In California, the state should “stay the course and transition people into more comprehensive policies,” said Patrick Johnston, CEO of the California Association of Health Plans.

The major insurance trade group warned that consumers renewing noncompliant plans will be predominantly younger and healthier, while older and sicker people will migrate to the subsidized marketplaces. That could drive up costs.

“Changing the rules after health plans have already met the requirements of the law could destabilize the market and result in higher premiums for consumers,” said Karen Ignagni, CEO of America’s Health Insurance Plans.

Q: The year is almost over. Insurers have already told consumers to buy plans by Dec. 15 if they want coverage for Jan. 1. Can the companies reverse course so quickly?

A: That’s unclear. Besides setting 2014 prices for the plans and dispatching hundreds of thousands of letters, insurers must gain approval from state regulators.

Q: Will state regulators allow this?

A: Some may not. Many objected to Obama’s suggestion. Extending subpar plans could “undermine the new market and may lead to higher premiums,” said Jim Donelon, president of the National Association of Insurance Commissioners.

Washington state Insurance Commissioner Mike Kreidler said he would not allow insurers to extend the policies “in the interest of keeping the consumer protections we have enacted.”

Regulators note that existing plans might not include health-law features such as caps on out-of-pocket costs and coverage of essential benefits such as prescription drugs, maternity care and hospitalization.

But in California, Insurance Commissioner Dave Jones said he supports Obama’s suggestion and will urge insurers to extend policies. Regulators in Florida and Kentucky also said they would allow the move.

Q: Given all the uncertainties, will many consumers seize the chance to renew?

That’ll depend on carriers, insurance commissioners and customers themselves. John Jaggi, a broker in Forsyth, Ill., knew of at least one client who would be interested.

Jaggi had just gotten off the phone with the customer, whose policy was due to be canceled and replaced by a more expensive one, when he heard about Obama’s idea.

The man is not eligible for health-law subsidies. Extending his existing coverage “will save him about $375 a month” in premiums, Jaggi said. “And his deductible was going to double.”

By Anna Gorman and Phil Galewitz and Jay Hancock and Julie Appleby November 15, 2013