Michelle La Voie wants health insurance, but as a single mom making $38,000 a year and supporting two teenagers, she’s not sure she can afford it — even with a subsidy through the federal health law known as Obamacare. 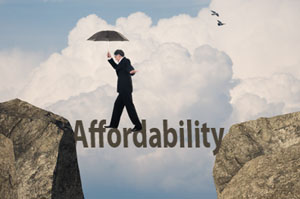 When enrollment in new online insurance markets begins next month, La Voie will likely qualify for a subsidy to buy private insurance, but would still have to pay $191 a month, or about 6 percent of her income toward the premium. She could also face as much as $2,000 in potential out-of-pocket costs for hospital care and prescription drugs, if she needs those things.

“What’s the point of having [a policy] if I can’t afford to use it?” asks the 47-year-old librarian in upstate Franklinville, New York, referring to the co-pays and deductibles that she might incur if she sought treatment.

How consumers judge the affordability of the new health plans remains one of the biggest unknowns on the eve of the rollout of the health law’s insurance marketplaces. Those marketplaces, aimed at people without group coverage, are predicted to sign up 7 million enrollees by the end of next March. Will shoppers regard the plans as a good value?  Will they be able to afford the monthly premiums and other out-of-pocket costs built into most plans?

The answers are likely to depend on factors such as their age, income, health issues — and perhaps most important, whether they qualify for free or low-cost care through a government program, or for a substantial subsidy to buy private coverage.

Some may also weigh whether it is simply cheaper to pay the penalty for not having insurance, which is $95 or 1 percent of household income, whichever is greater, rather than buying coverage.

‘Not Much Left Over for Extras’

Experts say that moderate-income Americans like La Voie, who will be eligible for subsidized coverage but who must still pay between 6 to 9.5 percent of their income toward monthly premiums, are likely to have the hardest time affording the policies.

“I live paycheck to paycheck,” La Voie said. “It’s not like I take vacations, go out to eat, or buy lots of clothes … My money goes to rent, gasoline, food, student loans and utility bills almost exclusively. Believe me, there’s not much left over for extras. It’s very depressing.”

While lower-income people face the same pressure, they will get more help from the government. More than half of the uninsured, for instance, are poor enough to qualify for free or low-cost care through Medicaid, if their states expand the program under the law.  Others will qualify for the most generous subsidies to buy private insurance.

When Joan Fiander of Annandale, Virginia, checked what might be available for a close relative making $9.50 an hour and working full-time, for instance, she was gratified to discover the family member would qualify for subsidies that would keep her monthly insurance cost below $50 a month.

“She was very excited, very excited,” Fiander said. “This is the first time in a long time that she’s gotten a break.”

The law also provides lower-income consumers reduced payments for deductibles and copayments for doctor visits or hospital care. But that help ends after household income hits 250 percent of the poverty level.

Insurers must provide certain preventive care services for free, such as cancer screenings and some vaccines. And some plans may also offer doctor visits or other services for a small payment without triggering the deductible. But visits to specialists, buying prescription drugs and hospital stays are among the medical services likely to cost more in the form of copayments and deductibles.

For La Voie, who makes less than 200 percent of the federal poverty level, the law caps out-of-pocket costs at $2,250 for individuals. (Her children are covered by a public plan so she would be looking at an individual policy.) Additionally, New York caps people in her income range to a $200 annual deductible and $2,000 in out-of-pocket costs.

Policy experts say that she’s better off buying a plan even if it’s a struggle because she would be covered for a broad range of benefits. They point out the costs would be far less than if she landed in the hospital as a result of a serious illness or accident and was uninsured.

“People without insurance now are either foregoing health care they would otherwise want or need, or are getting health care but racking up debt,” said Sarah Lueck, senior policy analyst with the Center on Budget and Policy Priorities.

La Voie fits the bill. She has put off treatment for an episodically painful gall bladder problem which she worries could put her in a hospital emergency room. If that happened, she “would have no choice” but to work out a payment plan to cover the treatment.

Nevertheless, she plans to take that chance because paying the fine for not having coverage is more affordable.

“For now, I’m going with the penalty,” she said. “I would love to have insurance but I also want to [be able to] pay for rent and groceries.”

Some Say Obamacare’s ‘Affordable’ Coverage Isn’t Affordable For Them