LOS ANGELES — As states gear up for round two of Obamacare enrollment next month, they have their sights set on people like Miles Alva.

Alva, 28, works part-time at a video store and is about to graduate from Cal State Northridge. Getting insured is about the last thing on his mind.

“It’s not a priority,” the television and cinema arts student said. “I am not interested in paying for health insurance right now.”

The second round of enrollment under the nation’s Affordable Care Act promises to be tougher than the first. Many of those eager to get covered already did, including those with health conditions that had prevented them from getting insurance in the past. 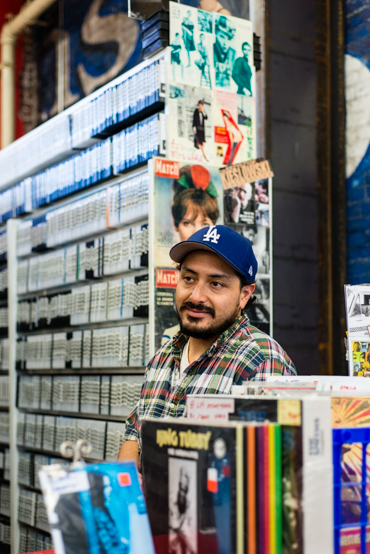 Miles Alva, 28, during his shift at Videotheque, a video store in South Pasadena. The television and cinema arts student says getting insured is not a priority and would rather deal with the penalty (Photo by Heidi de Marco/KHN).

About 30 million to 40 million people remain uninsured in the United States, according to various surveys.

“When you look at those who remain uninsured, they are in many ways harder to reach,” said Anne Filipic, president of Enroll America, a nonprofit group that signs up consumers for new health coverage. “This is really about doubling down and reaching those folks who didn’t get the message the first time.”

During the inaugural round, computer glitches and other missteps delayed sign-ups and created a political backlash. Yet more than 7.3 million people purchased health plans through new insurance marketplaces and nearly 8 million low-income people enrolled in Medicaid. The massive effort helped to bring the nation’s uninsured rate down to its lowest level since 2008.

This time, states and the federal government aim to renew the people they signed up last year as well as add about 6 million currently uninsured residents to the exchanges and 4 million to the Medicaid rolls, according to estimates from the Congressional Budget Office.

And there’s a time crunch – the second round of open enrollment lasts only three months, about half the time as before.

Health and Human Services Secretary Sylvia Burwell said last week that the government is facing “deadlines every day” so  it will be ready for the Nov. 15 start date.  Officials are testing the site to ensure it can handle the demand, she said.

Health officials and advocates plan to adjust their pitch.  Last time, they persuaded many to sign up by extolling the benefits of insurance. This time, they plan to focus more on the financial assistance available to consumers as well as on the penalty for not having coverage. In year two, those without insurance face a fine of $325 per person or 2 percent of their income, whichever is larger.

But for many, whether to enroll in a plan has nothing to do with the penalty. In fact, a large portion of uninsured people were unaware of it, polls show. What troubles them is the price.

Alva, for example, makes about 10 an hour in his video job, working 25 to 30 hours a week during school – not enough, he said, to afford insurance. He has heard about the penalty but doesn’t know how much it is for him. “I guess I will deal with that when it comes,” he said.

Barb Hill, 54, who lives outside Chicago, supports Obamacare but chose not to sign up last year. Even with a subsidy, she said, insurance would have cost her $200 each month.

“I really don’t go to the doctor that much so I didn’t know if it was worth spending that,” said Hill, an X-ray technician at a private health care office.

This year, however, she is reducing her cell phone bill and giving up monthly massages that ease her back pain so she might be able to afford a plan. Then again, if the premium has increased, she said, “I am going to have to really think about it.”

Among consumers still uninsured as of June, nearly 60 percent said they couldn’t afford coverage, according to a recent analysis by the Urban Institute.

Long said the states and federal government need to do a better job of educating potential consumers about their options.

That’s what Sheila Chilson and her team at Moses Lake Community Health Center in Washington are trying to do – teach patients how insurance works and help them figure out how to afford it. “We have a year’s experience under our belt, but we are preparing ourselves for the same level of volume and potential frustration,” she said.

Although uninsured residents are scattered throughout the U.S., nearly half live in the South and many are concentrated in the two dozen states that chose not to expand their Medicaid programs, according to the Urban Institute analysis. The health law expanded Medicaid to more low-income adults, but a Supreme Court ruling made that provision optional for states.

As a result, nearly 5 million uninsured adults fall into a “coverage gap” – they make too much to qualify for the existing Medicaid program but too little to get financial help purchasing a plan through the marketplaces, according to the Kaiser Family Foundation. (Kaiser Health News is an editorially independent program of the foundation).

Greg Morris, 46, is one of about 300,000 Missouri residents in that gap. Morris, a single father, lives in Osage County and works part-time at a miniature golf course. “The only option I have is to pay more than I can afford,” he said.

Morris plans to check his options again in November, but he is not hopeful. “I wish they would go ahead and expand the Medicaid the way the law was designed,” he said.

Missouri wants to add 100,000 more people to the approximately 150,000 who signed up for coverage through the federal exchange last year, said Ryan Barker, vice president of health policy with the Missouri Health Foundation. Even more ambitious is the foundation’s goal of cutting the state’s uninsured rate from 15.5 percent to below 5 percent within five years.

“We can’t do it unless the state expands Medicaid,” Barker said.

Nationwide, among the most difficult populations to reach are Latinos. About 6 million people in the United States, many of them Latino, are uninsured and ineligible for coverage because they are undocumented, according to the Kaiser Family Foundation. But even among eligible Latinos, enrollment has been impaired by a fear of calling attention to undocumented family members, a lack of timely Spanish-language information and a shortage of bilingual enrollment workers.

Nevertheless, the percentage of uninsured Latinos across the nation decreased from 36 to 23 percent by June 2014, according a September report from the Commonwealth Fund. Coverage gains were greatest in the states that expanded Medicaid eligibility.

Advocates found that in-person help worked best, as did partnerships with trusted groups, advertising on buses serving Latino neighborhoods and the use of health counselors, called promotoras.

In California, about half of previously uninsured Latinos gained coverage during the first round of open enrollment, according to the analysis.

In addition to having enough bilingual staff and investing enough in community groups, the enrollment process needs to be much smoother than last year, said Xavier Morales, executive director of Latino Coalition for a Healthy California. “Any hiccup … may mean that they may not come back.”

Covered California launched its new outreach effort this month, including an ad campaign featuring consumers who have benefited from health insurance. The state hopes to renew 1.2 million marketplace consumers and enroll about 500,000 new people. They also plan to renew 2 million Medicaid beneficiaries and take in several hundred thousand new applicants.

The marketplace plans to make a targeted push among Latinos and African Americans, said spokesman Dana Howard. “We need to do a heavier lift in making sure they get the information about Covered California.”

To reach them, the marketplaces need to invest more in outreach and education, through libraries, ethnic grocery stores and faith-based institutions, said Bonnie Kwon, a program manager at the forum. “If they are coming from a country that has a completely different system, they don’t understand co-pays, they don’t understand deductibles,” she said.

New enrollees can sign up anytime between Nov. 15 and Feb. 15. But those already enrolled will have from Nov. 15 to Dec. 15 to re-enroll and switch plans for coverage that starts in the New Year. Those who don’t will be automatically re-enrolled in existing coverage.

“We’re going to have up to 8 million people who need to get this done in 30 days: Holy smokes,” said Robert Laszewski, a Maryland-based consultant to the insurance industry.