“The Affordable Care Act is not making insurance more affordable,” she said in an interview, citing many of the same criticisms as her five GOP opponents in the Aug. 26 primary, who are vying for the chance to oust first-term Democrat Rep. Patrick Murphy. 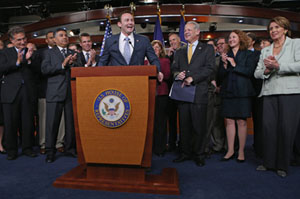 Freshman Rep. Patrick Murphy, D-Fla., speaks during a news conference shortly after his election in Nov. 2012. Republicans will choose a candidate to oppose Murphy in a primary election Tuesday (Photo by Chip Somodevilla/Getty Images).

Hires’ messaging on Obamacare in this South Florida district targeted by the GOP tracks a pattern around the country as Republican candidates follow a focus-group tested script recommended by pollsters.

“The messages that work best are succinct, clear statements about the effects of Obamacare on consumers directly,” by increasing costs, taxes and taking away jobs, said Whit Ayres, president of North Star Opinion Research, a Republican polling group that’s surveyed likely voters to determine the best way to attack Obamacare.

Heading into the first congressional election since millions of Americans gained coverage under the health law, many Republican candidates are taking a more nuanced approach to how they criticize the law.  Rather than just calling for repeal, they are following Ayres’ recommendations to focus on arguments about how the law is hurting consumers, government budgets or the economy.

And while political ads on television are still common, the number of new ads about the law has declined since spring when the administration rebounded from the troubled launch of healthcare.gov, said Elizabeth Wilner, senior vice president for Kantar Media Intelligence in New York, a nonpartisan group that tracks political advertising.

“Obamacare is no longer front and center in the way it was earlier this year and late last year,” she said. “It remains an issue, but it’s no longer the only one.”

She cited other frequently mentioned topics such as government spending and the economy.

‘Playing To The Base’

While most GOP candidates continue talking about the health care law to rally the base, attacking it is no longer seen as winning over new voters since most people have made up their minds about it, say political analysts.

“Opposing Obamacare is a reinforcing issue that helps re-energize their base of voters but it does not move a lot of new voters to them,” said G. Terry Madonna, director of the Center for Politics & Public Affairs at Franklin & Marshall College in Lancaster, Pa.

Despite a shift in how they talk about the law, there’s no sign GOP candidates are going soft on it, analysts say.

“Remember, this is a midterm with low turnout,” said Larry Sabato, director of the Center for Politics at the University of Virginia. “Candidates on both sides are playing to their base and hoping for a large boost from them in fundraising and votes. You don’t accomplish that by watering down the message.”

Sean Foreman, associate professor of political science at Barry University in Miami, said GOP candidates use Obamacare to portray the administration as inept because of the botched website rollout and some insurers raising prices. “This is red meat on the campaign trail for Republicans,” he said.

Rep. Tom Cotton, a freshman Republican trying to unseat Democrat Sen. Mark Pryor in Arkansas, went on the defense after a Gallup survey found that Arkansas’ uninsured rate had been almost halved this year due to the health law.

“The thing about Obamacare is it no doubt helped some people,” Cotton said. “But think about all the people it hurt and the ways it hurt them. It caused people to have insurance cancelled. It drove up the cost of their health insurance premiums, or it cost them access to their doctor or imposed new taxes.”

To attack Obamacare, Rep. Cory Gardner, the Republican challenging Colorado Democrat Sen. Mark Udall, began airing ads in August about how his insurer had cancelled his family’s coverage because of the health law. State officials have said more than 90 percent of Coloradans with cancelled plans were allowed to keep them.

In the House race to unseat Murphy in Florida’s 18th congressional district, Obamacare has taken a back seat to mostly local issues including stopping a proposed high speed rail line running from Orlando to Miami and how best to clean the St. Lucie River.

Murphy rarely mentions the law in his appearances in this district running from north of Palm Beach to Fort Pierce. Mitt Romney won 51.5 percent of the vote here in 2012 when Murphy narrowly defeated former Republican Rep. Allen West, a tea party favorite.

Murphy’s latest mailing to voters makes no mention of his vote against repealing the law. On his campaign website, he notes he supports the health law while favoring delay of the mandates requiring most people to have coverage and large employers to offer it.

Carl Domino, a former state lawmaker and front-runner to win the GOP nomination, notes in his first TV ad launched in August that Murphy supports Obamacare. In an interview, Domino said most people tell him they’ve been hurt by the law by having to pay higher premiums or co-pays. “None of the promises made by those who passed the law turned out to be true,” he said.

Domino said he was not familiar with surveys by Gallup and others showing that 8 million to 10 million people have gained coverage this year.

Alan Schlesinger, also running in the GOP primary in the 18th district, argues the law has done nothing to slow the rise of health costs.  Schlesinger said he was not familiar with studies showing health spending growing at historically low rates.

He said he is not worried about voter backlash from those who would have been gained insurance had Florida expanded Medicaid under the law. “I don’t think the average person knows anything about it,” he said.