FORT LAUDERDALE, Fla. — For the past week, Henry Bowles has stood along a busy road here six hours a day holding a sign that reads “Obamacare Help Center- Free Enrollment” and points to a nearby insurance agency.

With sunny skies and temperatures in the high 80s, Bowles uses a towel to grip the wooden stick bearing the sign so his sweaty hand won’t slip. He is paid about $8 an hour. 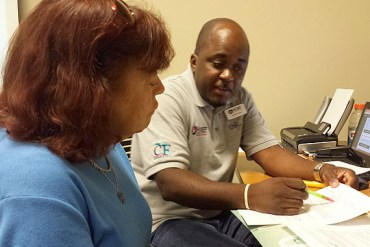 Harriet Cohen, 63, gets help enrolling in a health plan for under $7 a month at the Greenacres, Fla., library from navigator Abdius Pierre Cohen who lives in Boynton Beach, Fla. (Photo by Phil Galewitz/KHN)

Money is not the reason as he tells it, although he discloses he didn’t file his taxes last year because his income wasn’t high enough. He’s also aware there’s financial assistance for low-income people like him. And he knows about the federal requirement to have coverage.

Will he sign up this year before open enrollment ends Jan. 31?

“I’m thinking about it,” Bowles said one afternoon this month.

Inside the insurance agency that Bowles is hawking, called Obamacare and more, agent Seif Sidky confesses he’s been too busy helping customers to talk to Bowles about enrolling.

“I do see the irony,” he said, absorbing the incongruity of a worker pitching Obamacare while lacking insurance himself.

Bowles’ situation epitomizes the challenge for advocates, brokers and federally-funded navigators in Florida and also nationally in this third Obamacare open enrollment season.  Their shared goal: Increase the number of Americans buying health plans. It won’t be easy. About 1.3 million Floridians signed up for individual coverage during the 2015 open enrollment on the online marketplace created by the Affordable Care Act. That was tops in the country – even higher than in California and Texas, which have more people. Like most states, Florida’s uninsured rate has fallen sharply – to 15 percent from 22 percent in 2013, according to Gallup.

To encourage more people to sign up in Florida, Obamacare assisters are handing out flyers at food truck festivals, farmers’ markets and health fairs. They’re giving one-on-one enrollment assistance at libraries, hospitals and community centers. They’re even showing up after church services to sign up people.

Tammy Myers, a navigator with the Epilepsy Foundation of Florida, was passing out information about Obamacare on Thursday evening at a Deerfield Beach, Fla. park where 25 food trucks were peddling dinner options from Maine lobster to Cuban sandwiches. 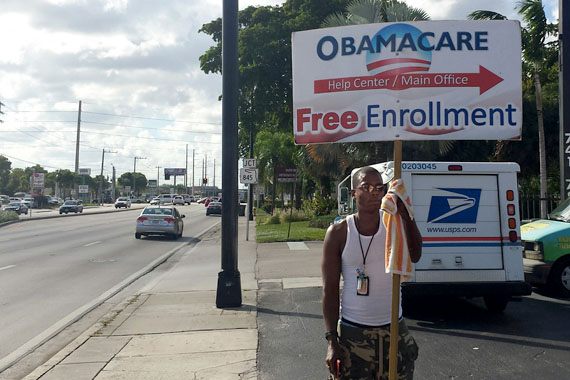 People must be reminded about their need for coverage, Myers said, as well as the many new options to help them afford it. On Nov. 1, the first day of enrollment, she helped sign up four uninsured people at a Fort Lauderdale church who were inspired to act by their minister’s suggestion during the service.

Travis Long was sitting in a folding chair watching customers walk to his Key West Conch Shack & Grill truck. Long, 44, has been uninsured since he bought the truck two years ago, after leaving his corporate job and the employer-sponsored health coverage that went with it.

“I know it’s time for me to sign up…I’ve been putting this off long enough and I know it’s sort of like playing Russian roulette,” he said.

He paid a $395 federal penalty for not having coverage last year when he could have afforded it. With the fine going up to $695 in 2016, he said it’s not a good idea to spend so much money and still be uninsured. He’s worried about buying a plan with a large deductible or one that doesn’t cover all the doctors and hospitals he would like.  But he’d also like a plan that includes dental care.

At a Palm Beach County library on ‘A’ Thursday afternoon, about a dozen people came to hear a short talk about Obamacare and get help enrolling. Several groups were there to lend assistance, including the nonprofit Enroll America and the Health Council of Southeast Florida, a federally-funded navigator.

One attendee was Harriet Cohen, 63, who needed insurance because her county-funded health plan will end in December. Working with a navigator, she determined in less than 30 minutes how much federal subsidy she was eligible for, saw dozens of plans, and picked one.

She signed up for an Ambetter Health Plan that had a $6.98 monthly premium after the subsidy, a zero deductible, free primary care visits and $10-a-visit fee to see a specialist.  Her doctor was not in the plan’s provider network, but Cohen said she didn’t care since there were still many to choose from near her house.