Danny Wilson figures he’d probably be dead if it weren’t for Obamacare. 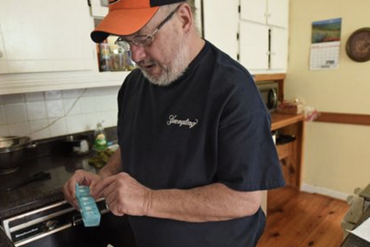 Danny Wilson, 60, checks out his medication at his home in Lizella, Ga. on June 4, 2015. A stroke last winter sidelined him from his job of 25 years. Now, Wilson is one of 430,000 Georgians who could lose the federal tax credits that allow them to be able to afford health insurance. (Photo by Hyosub Shin/Atlanta Journal-Constitution)

Once healthy and strong enough to “rassle a bear,” Wilson, 60, suffered a stroke in January that forced him to quit his job as a beer distribution manager and stripped his family of the health insurance that job provided. So, like nearly half a million other Georgians, Wilson turned to the Affordable Care Act’s insurance marketplace to buy the coverage he, his wife and daughter needed.

Wilson fears his new coverage may soon be ripped away too. He is one of roughly 413,000 Georgians who are at risk of losing their Obamacare insurance, depending on how the U.S. Supreme Court rules on a lawsuit later this month.

“I’m not a big Obama fan, but I don’t know how anybody could be against this,” Wilson said. “Prisoners get all of their health care paid for, so why can’t someone who’s worked all their lives also get some help?”

Yet conservatives in Georgia and across the nation are just that — staunchly opposed to the Affordable Care Act, its mandate that most Americans buy insurance and its use of billions of taxpayer dollars to help pay for Obamacare plans.

“For the president to imply that those who oppose Obamacare do so in order to harm our fellow citizens is particularly insulting,” Price said in a statement. “It is precisely the president’s health care law that is driving up costs for families and businesses and kicking millions of people off of health care plans they had and liked.”

In the Supreme Course case, King v. Burwell, the plaintiffs argue it’s illegal to give tax credits to Americans who bought health plans through the federal marketplaces, also called exchanges, versus those created and run by states. Without the credits, experts say, most people with Obamacare plans would be forced to drop coverage that they can no longer afford.

Such a blow could topple the federally run marketplaces in the 34 states that chose not to build and run their own.

The Obama administration says it has no backup plan if the tax credits are struck down.

Neither has the state.

‘There Will Be Two Americas’

Access to health care for 6.4 million Americans hinges on just four words in the more than 900-page health care law: “established by the state.”

The plaintiffs in King v. Burwell argue those words mean individuals who live in states that chose not to set up their own Obamacare marketplaces — letting the federal government do it for them instead — aren’t eligible for the tax credits.

For most people, those credits are what make the Affordable Care Actactually affordable.

If the credits disappear, monthly premiums will spike by 200 to 300 percent, said Cynthia Cox, an associate director of health reform at the Kaiser Family Foundation, a nonprofit, nonpartisan organization specializing in health policy. Georgians would be among the hardest hit in the country. The average premium would jump from roughly $72 to nearly $350 per month — a 380 percent spike, Kaiser estimates show.

“There will be two Americas as far as health insurance is concerned,” she said.

The law’s supporters say the court should uphold the tax credits because the intent of the law is clear — all Americans who buy in an Obamacare marketplace should be eligible for the credits regardless of whether it’s run by the state or feds.

Critics argue the law’s language is unambiguous and it should be up to Congress to change it.

Kelly Rambis, 55, doesn’t care what happens to the tax credits.

The Kennesaw woman bought an Obamacare plan shortly after being laid off earlier this year. She was thrilled at first, learning the plan would only cost her $15 a month. But her elation quickly evaporated when she went to the doctor. She was turned away.

The plan’s network of doctors was so narrow and the deductibles and co-pays so high that Rambis felt as if she was barely insured. So she redoubled her efforts to find a job that provides insurance and jettisoned her Obamacare plan after only two months.

“It was just horrible,” she said. “I don’t ever want to deal with Obamacare again.”

Ron Bachman, a senior fellow at the conservative-leaning Georgia Public Policy Foundation, said he hopes the court will rule against the tax credits. Such a move may spur a much-needed national discussion of how best to provide Americans with insurance, Bachman said. Obamacare hasn’t solved the nation’s uninsured problem, since many who bought ACA plans already had insurance, he said.

America needs a health care system that focuses on consumer responsibility, delivers patient-centered care and gives families more choice in what coverage to buy, Bachman added. The Affordable Care Act currently requires all plans to include certain “essential health benefits,” which drives up costs, he said. Those benefits include services, such as maternity care. But not everyone needs the same level of coverage.

“I think the people should be able to buy what they need, not what the government thinks they need,” he said.

If the Supreme Court rules against the government later this month, the fallout will be widespread.

People could lose their tax credits in as little as 30 days, some experts say. Others predict the court or Congress could phase out the credits over time to give people a chance to find other coverage options before cutting them off from financial help.

One cornerstone of Obamacare is its “individual mandate,” which requires adults to buy health insurance. A court ruling that disallows tax credits for millions would severely weaken that mandate: people can’t be forced to buy insurance if they can’t afford it.

The result: healthy individuals will likely drop coverage, leaving only the sickest, most expensive individuals behind in the marketplaces.

Such an imbalance means the marketplaces will rapidly devolve into a so-called “death spiral” — pushing up premiums not just for those with marketplace plans but people with individual coverage outside of the marketplaces too, insurers say.

“Premium tax credits … are essential,” national trade group America’s Health Insurance Plans wrote to the court in support of the credits. “There is no practical reason to distinguish between state- and federally operated exchanges in this regard.”

Without the credits, newly uninsured people will again be forced to seek care in hospital emergency rooms instead of clinics or doctors’ offices, said Earl Rogers, head of the Georgia Hospital Association. And that, Rogers said, will raise the cost of care for everyone.

Every year, people who do have insurance end up bearing the cost of those who don’t, to the tune of roughly $1,500 in higher hospital bills, insurance premiums and taxes, estimates from Georgia State University show.

Georgia hospitals dole out $1.7 billion in uncompensated care every year, even with the credits in place, Rogers said. He added that he has confidence that federal and state policymakers will take action to make sure Georgians’ needs are met.

‘We’ve Been Through That’

The states and federal government, however, seem to be sticking to their high-stakes game of chicken.

Few have offered solutions to the potential crisis even though the court is expected to rule in less than three weeks in the King v. Burwell case.

Earlier this year, Sen. Ron Johnson, R-Wis., introduced a bill that would let Americans keep any health care plans and tax credits they currently have until August 2017. It would also repeal the Affordable Care Act’s coverage mandates.

Price, a Roswell Republican and chair of the House Budget Committee, also proposed his own fix earlier this month.

Republicans acknowledge that abruptly taking away the credits could cause a hardship for millions. But many expect the credits to be phased out over time, avoiding such dire consequences.

Meanwhile, the Obama administration has remained firm in saying it has no backup plan.

In Georgia, Gov. Nathan Deal told The Atlanta Journal-Constitution recently that the state isn’t preparing a “Plan B” in case the tax credits are declared unconstitutional.

Deal and other Georgia leaders have remained staunchly opposed to the 5-year-old Affordable Care Act from the outset. They declined to build a state-run insurance exchange and have refused to expand Medicaid, another pillar of the law, calling such a move too costly for taxpayers.

“We’ve been through that thought process before and made the judgment call that this is a federal idea and the feds need to implement it,” Deal said.

He also closed the door on any efforts to revive a state-based exchange — an unlikely prospect given that legislators passed a law last year barring the state from creating its own marketplace.

Other states are weighing their options.

In some, governors could use an executive order to create a state-based marketplace, though not in those that banned it by law, such as Georgia, said Cox with Kaiser.

Setting up a marketplace in Georgia would take a lot of time and manpower, said Erin Fuse Brown, an assistant professor of law at Georgia State.

For now, Georgians like Ted Souris will just have to wait.

No tax credit means no health insurance for Souris.

The Smyrna man isn’t a fan of the Affordable Care Act but decided to take advantage of it and retire early from his sales job. Now happily retired, there’s no going back to his employer and at 62 he’s still three years shy of qualifying for Medicare, the government health program for Americans 65 and older.

Souris’ tax credit lowered his monthly premium from about $460 to roughly $100. Without it, “there’s no way I could afford it,” he said. “I guess I’d just access the emergency room and try my best not to get sick.”

Wilson, the former beer distribution manager, worries how he could possibly afford the medications he must take following his stroke. One drug costs $400 per pill.

Without a tax credit, Wilson would have to pay $300 a month just for insurance for himself, a price he and his wife can’t afford on her minimum wage income. The couple already struggles to pay for frequent trips to Atlanta to see an eye specialist to treat Wilson’s low vision.

Obamacare Ruling Could Kill Coverage For 413,000 In Georgia