Sudden chest pains landed Diane Zachor in a Duluth, Minn., hospital overnight, but weeks later she had another shock – a $442 bill for the same everyday drugs she also takes at home, including more than a half dozen common medicines to control diabetes, heart problems and high cholesterol. 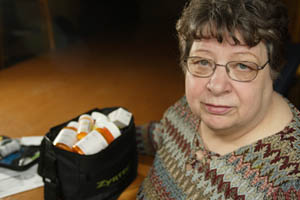 “I just couldn’t believe some of these prices they charge,” said Zachor, 66. “It’s just atrocious.”

For the price she was charged for her insulin during her 18 hour stay at St. Luke’s Hospital, Zachor would have enough to cover her out-of-pocket expenses for a three-month supply under her private Medicare Advantage plan if she had been home. The tab for one water pill to control high blood pressure could buy a three-week supply. And the bill for one calcium tablet could have purchased enough for three weeks from the national chain pharmacy where she gets them over-the-counter.

Even though her health plan covers medical and drug expenses, her policy did not pay the hospital drug bill because St. Luke’s never formally admitted her. Instead, it billed the visit as observation care, which is considered an outpatient service.

That observation label excludes thousands of patients every year from full Medicare coverage; many have spent more than a day in the hospital and had regular hospital rooms and service and, like Zachor, never realized they were not admitted.  These observation patients might wind up paying a larger share of their hospital bill than inpatients, since they usually have a co-payment for doctors’ fees and each hospital service. 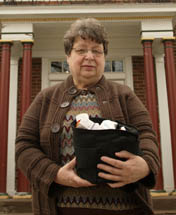 For the price she was charged for her insulin during her 18-hour stay at St. Luke’s Hospital, Diane Zachor would have enough to cover a three-month supply under her private Medicare Advantage plan. (Photo by Julia Cheng/USA Today)

But Medicare doesn’t pay at all for routine drugs that observation patients need for chronic conditions such as diabetes, high blood pressure or high cholesterol – drugs that Zachor could have brought from home if the hospital allowed it and she had time to get them. Medicare also has no rules for what hospitals can bill for non-covered drugs, so they can charge any amount.

It’s an unwelcome surprise for patients who may not get the bad news until they receive a hospital bill.  Medicare has no rules requiring hospitals to tell patients when they are in observation status or that they will be responsible for paying any non-Medicare-covered services, said Ellen Griffith, a spokeswoman for the U. S. Centers for Medicare and Medicaid Services.

“St. Luke’s carries out ‘observation’ and all other health care policies as prescribed by Medicare rules,” said Mary Greene, a St. Luke’s Hospital representative, in an e-mail.  She referred any questions to Medicare.

Excessive drug prices have also surprised seniors in other parts of the country:

–In Missouri, several Medicare observation patients were billed $18 for one baby aspirin, said Ruth Dockins, a senior advocate at the Southeast Missouri Area Agency on Aging.

–Pearl Beras, 85, of Boca Raton, Fla., said in an interview that her hospital charged $71 for one blood pressure pill for which her neighborhood pharmacy charges 16 cents.

–In California, a hospital billed several Medicare observation patients $111 for one pill that reduces nausea; for the same price, they could have bought 95 of the pills at a local pharmacy, said Tamara McKee, program manager for the Health Insurance Counseling and Advocacy Program at the Alliance on Aging in Monterey County, Calif., who handled at least 20 complaints last year from Medicare beneficiaries about excessive hospital drug bills.

The most recent government statistics show the number of observation claims that hospitals submitted to Medicare rose 46 percent to 1.4 million from 2006 to 2010 and the number of cases lasting longer than 48 hours more than tripled.

The American Hospital Association, in a 2010 letter to Medicare officials, said several factors explain that growth, including increasingly restrictive Medicare criteria hospital admissions and rising use of audits to monitor hospital decisions and billing. In addition, it said, physicians sometimes try to keep seniors in the hospital because they may not be well enough to be home, even when they are not sick enough to be admitted.

“I don’t blame the hospitals,” said attorney Gill Deford at the Center for Medicare Advocacy, based in Connecticut, which has filed a nationwide class action lawsuit against the federal government on behalf of observation patients who are ineligible for Medicare coverage for nursing home care when they leave the hospital.  The suit seeks to either eliminate observation status or require hospitals to tell patients when they are admitted for observation and allow them to appeal the designation.  “This is a big money-saver for the Medicare program,” he added.

Since the program does not limit the prices for drugs that Medicare doesn’t cover, that can create an opportunity hospitals may find hard to resist.

Hospitals use their pharmacies to help generate revenue to subsidize the other operating costs of the facility, said Miriam Mobley Smith, dean of the College of Pharmacy at Chicago State University.  She said the “upcharge” is based on numerous factors including personnel, insurance and facility costs. “I’m not justifying the charges, but there’s a huge difference between the cost of operating a retail pharmacy compared to a hospital pharmacy.”

Even patients with private Medicare Part D drug insurance may find that their policies don’t cover their everyday — or “self-administered” — drugs given to them in the hospital. “These drugs may be covered under certain circumstances,” according to the Medicare website.  But there is no requirement that Part D beneficiaries must be fully reimbursed for these drugs.

Dockins said requiring hospital pharmacies to participate in the Medicare Part D drug plans would help control pricing because the beneficiaries would get discounts negotiated by the plan.

To avoid drug charges, Dockins tells seniors to bring their medicine in the original pill bottles when they go into the hospital. But hospitals are not required to let patients use their own medicine from home, said Leta Blank, coordinator for Montgomery County, Md.’s, Senior Health Insurance Assistance Program.

Dockins suggests that low-income seniors apply for a hospital’s charity care program so that the charges can be waived or reduced, if they qualify.

Zachor, who works as an office manager for the Minnesota Citizens Federation, a consumer advocacy group, contacted her Medicare Advantage plan to appeal its decision to not cover her hospital drug bill. In February, her insurer said it requires hospitals with which it contracts “to notify a member before delivering a non-covered service.” Because the hospital didn’t obtain Zachor’s written consent to accept those charges, the plan’s rules say the hospital cannot bill her for them.

However, other Medicare Advantage plans – which cover about a quarter of Medicare’s 48 million beneficiaries — may simply follow the traditional Medicare program, which does not require advance notice. Beneficiaries should check with their insurance companies.

Zachor’s $442 drug bill was scrapped. She has to pay only $50, the co-pay for an emergency room visit.

“What if I didn’t know there was a route to go to appeal to my plan,” Zachor said. “I was thinking about other people older than myself who don’t know what to do and they would probably have to go without food or medications — for how long — to pay a bill they didn’t have to pay.”

$18 For A Baby Aspirin? Hospitals Hike Costs For Everyday Drugs For Some Patients