In this series, “Treatment Overkill,” Kaiser Health News investigates the causes and consequences of medical overtreatment, both for patients and the health care system.

When she was a young physician, Dr. Martha Gulati noticed that many of her mentors were prescribing vitamin E and folic acid to patients. Preliminary studies in the early 1990s had linked both supplements to a lower risk of heart disease.

She urged her father to pop the pills as well: “Dad, you should be on these vitamins, because every cardiologist is taking them or putting their patients on [them],” recalled Gulati, now chief of cardiology for the University of Arizona College of Medicine-Phoenix.

But just a few years later, she found herself reversing course, after rigorous clinical trials found neither vitamin E nor folic acid supplements did anything to protect the heart. Even worse, studies linked high-dose vitamin E to a higher risk of heart failure, prostate cancer and death from any cause.

“‘You might want to stop taking [these],’” Gulati told her father.

More than half of Americans take vitamin supplements, including 68 percent of those age 65 and older, according to a 2013 Gallup poll. Among older adults, 29 percent take four or more supplements of any kind, according to a Journal of Nutrition study published in 2017.

Often, preliminary studies fuel irrational exuberance about a promising dietary supplement, leading millions of people to buy in to the trend. Many never stop. They continue even though more rigorous studies — which can take many years to complete — almost never find that vitamins prevent disease, and in some cases cause harm.

“The enthusiasm does tend to outpace the evidence,” said Dr. JoAnn Manson, chief of preventive medicine at Boston’s Brigham and Women’s Hospital.

There’s no conclusive evidence that dietary supplements prevent chronic disease in the average American, Manson said. And while a handful of vitamin and mineral studies have had positive results, those findings haven’t been strong enough to recommend supplements to the general U.S. public, she said.

The National Institutes of Health has spent more than $2.4 billion since 1999 studying vitamins and minerals. Yet for “all the research we’ve done, we don’t have much to show for it,” said Dr. Barnett Kramer, director of cancer prevention at the National Cancer Institute.

In Search Of The Magic Bullet

A big part of the problem, Kramer said, could be that much nutrition research has been based on faulty assumptions, including the notion that people need more vitamins and minerals than a typical diet provides; that megadoses are always safe; and that scientists can boil down the benefits of vegetables like broccoli into a daily pill.

Vitamin-rich foods can cure diseases related to vitamin deficiency. Oranges and limes were famously shown to prevent scurvy in vitamin-deprived 18th-century sailors. And research has long shown that populations that eat a lot of fruits and vegetables tend to be healthier than others.

But when researchers tried to deliver the key ingredients of a healthy diet in a capsule, Kramer said, those efforts nearly always failed. 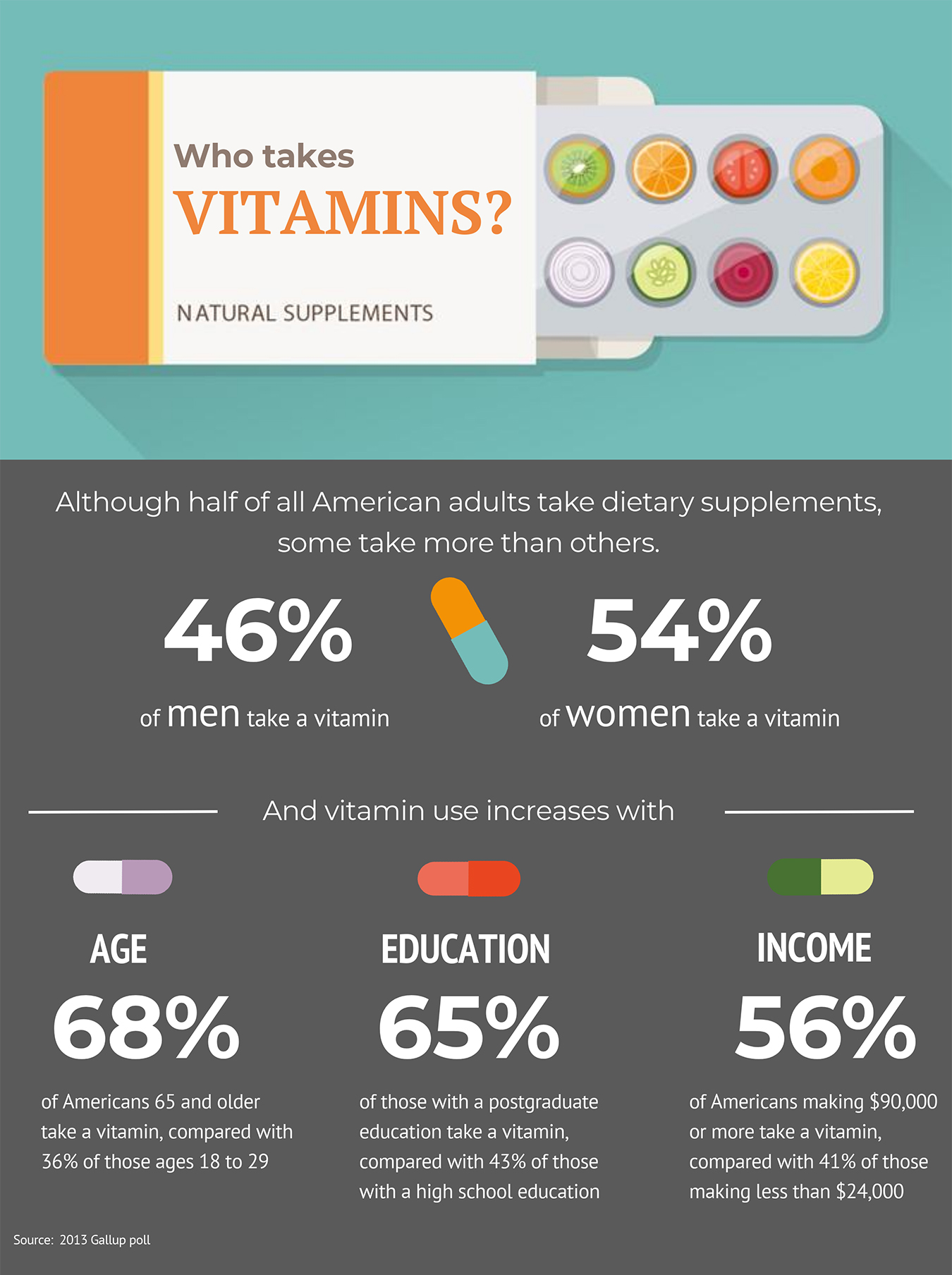 It’s possible that the chemicals in the fruits and vegetables on your plate work together in ways that scientists don’t fully understand — and which can’t be replicated in a tablet, said Marjorie McCullough, strategic director of nutritional epidemiology for the American Cancer Society.

More important, perhaps, is that most Americans get plenty of the essentials, anyway. Although the Western diet has a lot of problems — too much sodium, sugar, saturated fat and calories, in general — it’s not short on vitamins, said Alice Lichtenstein, a professor at the Friedman School of Nutrition Science and Policy at Tufts University.

And although there are more than 90,000 dietary supplements from which to choose, federal health agencies and advisers still recommend that Americans meet their nutritional needs with food, especially fruits and vegetables.

Also, American food is highly fortified — with vitamin D in milk, iodine in salt, B vitamins in flour, even calcium in some brands of orange juice.

Without even realizing it, someone who eats a typical lunch or breakfast “is essentially eating a multivitamin,” said journalist Catherine Price, author of “Vitamania: How Vitamins Revolutionized the Way We Think About Food.”

That can make studying vitamins even more complicated, Price said. Researchers may have trouble finding a true control group, with no exposure to supplemental vitamins. If everyone in a study is consuming fortified food, vitamins may appear less effective.

The body naturally regulates the levels of many nutrients, such as vitamin C and many B vitamins, Kramer said, by excreting what it doesn’t need in urine. He added: “It’s hard to avoid getting the full range of vitamins.”

Not all experts agree. Dr. Walter Willett, a professor at the Harvard T.H. Chan School of Public Health, says it’s reasonable to take a daily multivitamin “for insurance.” Willett said that clinical trials underestimate supplements’ true benefits because they aren’t long enough, often lasting five to 10 years. It could take decades to notice a lower rate of cancer or heart disease in vitamin takers, he said.

For Charlsa Bentley, 67, keeping up with the latest nutrition research can be frustrating. She stopped taking calcium, for example, after studies found it doesn’t protect against bone fractures. Additional studies suggest that calcium supplements increase the risk of kidney stones and heart disease. 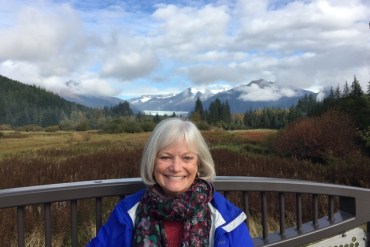 “I faithfully chewed those calcium supplements, and then a study said they didn’t do any good at all,” said Bentley, from Austin, Texas. “It’s hard to know what’s effective and what’s not.”

Like many people who take dietary supplements, Bentley also exercises regularly — playing tennis three to four times a week — and watches what she eats.

People who take vitamins tend to be healthier, wealthier and better educated than those who don’t, Kramer said. They are probably less likely to succumb to heart disease or cancer, whether they take supplements or not. That can skew research results, making vitamin pills seem more effective than they really are.

Preliminary findings can also lead researchers to the wrong conclusions.

For example, scientists have long observed that people with high levels of an amino acid called homocysteine are more likely to have heart attacks. Because folic acid can lower homocysteine levels, researchers once hoped that folic acid supplements would prevent heart attacks and strokes.

In a series of clinical trials, folic acid pills lowered homocysteine levels but had no overall benefit for heart disease, Lichtenstein said.

Studies of fish oil also may have led researchers astray.

When studies of large populations showed that people who eat lots of seafood had fewer heart attacks, many assumed that the benefits came from the omega-3 fatty acids in fish oil, Lichtenstein said.

Rigorous studies have failed to show that fish oil supplements prevent heart attacks. A clinical trial of fish oil pills and vitamin D, whose results are expected to be released within the year, may provide clearer ideas about whether they prevent disease.

But it’s possible the benefits of sardines and salmon have nothing to do with fish oil, Lichtenstein said. People who have fish for dinner may be healthier due to what they don’t eat, such as meatloaf and cheeseburgers.

“Eating fish is probably a good thing, but we haven’t been able to show that taking fish oil [supplements] does anything for you,” said Dr. Steven Nissen, chairman of cardiovascular medicine at the Cleveland Clinic Foundation.

Too Much Of A Good Thing?

Taking megadoses of vitamins and minerals, using amounts that people could never consume through food alone, could be even more problematic.

“There’s something appealing about taking a natural product, even if you’re taking it in a way that is totally unnatural,” Price said.

In the tiny amounts provided by fruits and vegetables, beta carotene and similar substances appear to protect the body from a process called oxidation, which damages healthy cells, said Dr. Edgar Miller, a professor of medicine at Johns Hopkins School of Medicine.

Experts were shocked when two large, well-designed studies in the 1990s found that beta carotene pills actually increased lung cancer rates. Likewise, a clinical trial published in 2011 found that vitamin E, also an antioxidant, increased the risk of prostate cancer in men by 17 percent. Such studies reminded researchers that oxidation isn’t all bad; it helps kill bacteria and malignant cells, wiping them out before they can grow into tumors, Miller said.

“Vitamins are not inert,” said Dr. Eric Klein, a prostate cancer expert at the Cleveland Clinic who led the vitamin E study. “They are biologically active agents. We have to think of them in the same way as drugs. If you take too high a dose of them, they cause side effects.”

Gulati, the physician in Phoenix, said her early experience with recommending supplements to her father taught her to be more cautious. She said she’s waiting for the results of large studies — such as the trial of fish oil and vitamin D — to guide her advice on vitamins and supplements.

“We should be responsible physicians,” she said, “and wait for the data.”

Older Americans Are Hooked On Vitamins Despite Scarce Evidence They Work