You might not have the physique of an Olympic athlete, but you could have health insurance like one.

That’s the point of a series of ads this year from Highmark Blue Cross Blue Shield, the official supplier of health insurance for Team USA. 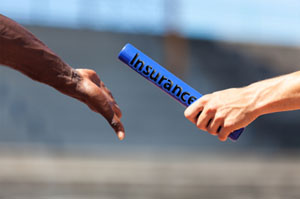 Highmark’s “PPO Blue” plan covers about 1.4 million Americans. Among them are about 1,000 elite athletes who, along with more than 360 U.S. Olympic Committee employees, get coverage through the Elite Athlete Health Insurance program.

The Olympic hopefuls often have other policies, too, especially given their high risk for injury and EAHI’s very high deductible. Still, the plan provides what the USOC describes as “a level of base support … in order to minimize the out-of-pocket expenses incurred by insured athletes for costs of medical care.”

“It’s a similar plan with similar benefits to those people might have through an employer,” said Steven Nelson, a senior vice president with Highmark. PPO Blue is also available on the individual market.

Nelson would not provide specific details about the USOC health plan, which offers preventive services and other benefits, both in the U.S. and overseas. Nelson did say that the committee can tailor its plan to the demands of athletes, such as physical therapy benefits. The USOC also did not provide comment on plan specifics.

The public likely wouldn’t expect Olympians to incur many health care expenses, given their excellent physical condition. But that isn’t the case, according to Jeffrey Potteiger, an exercise science researcher at Grand Valley State University.

“The reality is these athletes see physicians and trainers at a greater rate than average,” Potteiger said. “Any minor breakdown in health can have a major effect on performance.”

Mark Hutchinson, director of sports medicine at the University of Illinois in Chicago, agreed. Having worked with members of the U.S. gymnastics, basketball and field hockey teams, Hutchinson said that elite athletes see their doctor for an illness much sooner than the average person because getting proper medication early can shorten recovery time.

Like many other health plans, EAHI covers prescriptions and visits to the doctor, with higher charges for out-of-network care. But, as evidenced by its name, the Elite Athlete Health Insurance program is also highly selective. The 1,000 or so policies offered by the USOC are divided among the national groups that govern individual sports – for summer, winter and Paralympic Games – and each group sets its own requirements for eligibility.

USA Swimming, for example, is allocated 56 policies. Olympic team members are given the first crack at the coverage, followed by the top-ranked swimmers in each event who did not make the team. Similarly, USA Badminton has five policies it first offers to its Olympic team members, with the next level of priority given to players with the highest Badminton World Federation ranking. USA Track and Field has 150 and first gives access to athletes in its top two performance tiers, which includes athletes who medaled at the 2008 Games or medaled at a recent major championship.

For athletes, EAHI is one of many options, and they may opt for multiple layers of coverage. Olympians might have their own insurance through a spouse, employer or the individual market. Younger athletes also might choose to be on their parents’ health insurance. Since 2010, the federal health law has required insurers to cover dependents up to age 26.

According to Hutchinson, EAHI can help cover athletes above and beyond what they may have on these private insurance plans. For example, he said, the USOC likely offers better coverage of health care provided outside of the U.S.

Olympians might also look beyond EAHI because of the program’s limitations. Eligibility for the health plan is determined annually, and athletes’ performance or rankings can change. EAHI also has a $25,000 deductible for sports injuries, according to recent plan information from the U.S. Ski and Snowboard Association. The large deductible and athletes’ high risk of injury may drive them toward other insurance options.

Members of the gymnastics team often have at least two other forms of coverage, said John Hewett, chief financial officer for USA Gymnastics. Gymnasts – usually among the youngest Olympians – are often on their parents’ health plans. They also have secondary protection through an accident insurance plan, funded by USA Gymnastics, which covers potential injuries during training and competition.

The latter ensures gymnasts have coverage for something particularly devastating, such as a paralyzing injury. According to Hutchinson, this kind of catastrophic coverage is common among sports groups that want to avoid potential lawsuits.

Hewett said that USA Gymnastics simply wants to ensure its athletes are protected before, during and after the London games.

“USOC has them for two weeks every four years,” he said, “but we have to make sure they’re covered the rest of the time.”