Government bureaucrats are not often Twitter celebrities. But Andy Slavitt, current head of the agency that runs Medicare and Medicaid, is making a name for himself with a barrage of fiery Tweets in defense of the Affordable Care Act, breaking with the traditionally mute posture taken by federal employees.

As the Act — known as Obamacare — is coming under attack by the new Republican-controlled Congress and incoming Trump administration, Slavitt, acting administrator of the Centers for Medicare & Medicaid Services, isn’t being shy online.

“Taking health care coverage away from people is easy. Creating coverage for people is hard. We did the hard,” he tweeted on Dec. 15, and pinned to the top of his Twitter page. 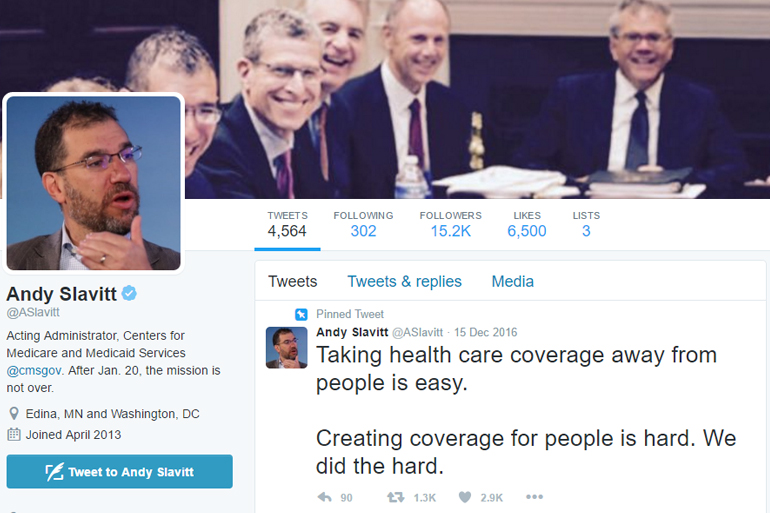 Andy Slavitt’s Twitter feed as of Jan. 18, 2016. Slavitt is acting administrator of the Centers for Medicare & Medicaid Services.

Or this, on the day after Christmas: “A number of people tweeted me over the weekend that some people don’t deserve health care but they apparently do. That’s bull.”

Slavitt, an infrequent tweeter before the election, has sent out 3,200 tweets since Dec. 6. He doesn’t hide behind the usual “retweets are not endorsements” Twitter bio, instead he now writes: “After Jan. 20, the mission is not over.”

Slavitt acknowledges that his heightened enthusiasm for the medium has coincided with renewed interest in repealing the ACA, though he says he hasn’t changed his tone, he’s just getting more attention now. “The reason you’re seeing a lot of things going viral is people are starting to realize what’s at stake,” he said in an interview.

He’s openly mocked Republican efforts to replace the law, tweeting out a link to a cnbc.com story in January reporting that repeal would increase the federal deficit with a sarcastic caption:

Wait. Shouldn't changes make things better?
-Increasing the deficit
-And no $ for a replacement plan

He’s been using his feed to solicit stories of Americans worried about losing their coverage. In one harrowing exchange in January, a woman from Arkansas tweeted at Slavitt, saying she would take her own life if she lost her insurance. “Hang in there please, there are many who will fight 4 your access 2 care. We will reach out to you directly. Copying CMS champ @AislingMCDL,” he responded, referring to Aisling McDonough, the senior communications strategist for CMS.

While his approach often draws “sniggers from the communications team” at CMS, Slavitt said that, at the end of the day, his job is to communicate the needs of patients, and make the often robotic and inaccessible bureaucracy of the federal government into something more human and relatable.

“I leave my family every day during the week to come to Washington to do my job. The terms I agreed to were to speak my mind and do what I think is right,” said Slavitt, who lives in Minnesota. “I’m not going to be right every time. If people want to criticize, I’m willing to take that.”

Once he is replaced under the new administration, Slavitt wrote — in a tweet — on Jan. 15:

More work to do after 1/29. I plan to keep working with all who are willing to make health care better.

The next day he went further: “Flying in for my final Monday @CMS.gov w plenty of work to do still. Considering chaining myself to my desk but my wife says bad idea.”

Being more controversial or opinionated is often the only way to cut through the noise of Twitter, according to Cliff Lampe, an associate professor of information at the University of Michigan who does research on social media. “Making emotional responses, rather than neutral, or even controversial ones will get you more attention in the marketplace,” he said.

Lampe predicted that more officials, not fewer, will start to take Slavitt’s approach to gaining the public’s attention. After all, it worked for President-elect Donald Trump.

Asked about comparisons to the incoming president, @realDonaldTrump, Slavitt’s rapid response: “He has more followers than I do. I’m very jealous. I’d love to have 19 million.”

One Foot Out the Door, Medicare Chief Launches His Own Twitter Barrage