About a quarter of the 243 groups of hospitals and doctors that banded together as accountable care organizations under the Affordable Care Act saved Medicare enough money to earn bonuses, the Centers for Medicare & Medicaid Services announced Tuesday. 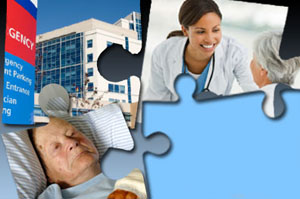 Those 64 ACOs earned a combined $445 million in bonuses, the agency said. Medicare saved $372 million after accounting for the ACOs that did not show success, including four that overspent significantly and now owe the government money.

The bonuses, losses and Medicare savings are teensy sums in the context of a program that spends half a trillion dollars a year on care for the elderly and disabled. But the Obama administration views the results so far as evidence that reorganizing the financial incentives for doctors and hospitals — a key element of the health law — can translate to substantial savings if the program expands nationwide.

ACOS are voluntary affiliations in which doctors and hospitals join together to coordinate care with the lure of earning extra money if they save Medicare money while maintaining the health of their patients. The program aims to encourage doctors to focus on keeping patients healthy and to intervene quickly if they are struggling, rather than waiting until they need complex — and for doctors in the old pay model, lucrative — operations or other kinds of care.

There are now more than 360 Medicare ACOs caring for about 5.6 million elderly Americans, although some of these ACOs are new enough that Medicare is not assessing their performance.

There are two types of ACO programs for which Medicare reported results. Under the largest experiment, the Medicare Shared Savings Program, 53 ACOs saved enough money for Medicare in 2013 to earn a piece of that as a bonus. On the red side of the ledger, 41 ACOs spent more than Medicare estimated they would under normal conditions. Most of these ACOs are shielded from financial penalties, but one –Dean Clinic and St. Mary’s Hospital Accountable Care Organization in Wisconsin –will have to repay Medicare $4 million because it cost Medicare $10 million above expectations.

A list of bonuses for those ACOs is available here.

For the remainder of these ACOs, Medicare either did not have final results or found spending changes so small that they might be due to fluctuations in patients’ year-to-year needs. Those ACOs received neither bonuses nor penalties.

The second, smaller group of 23 ACOs are in the Pioneer ACO Model. They have more experience, and the financial incentives are larger. Out of this group, 11 earned bonuses, Medicare announced. Three other ACOs in this Pioneer ACO Model lost money, and three more took advantage of a Medicare option that allows them to delay evaluation until after they have three years of experience.

The Pioneer results covered the second year of that program, while the performances of the other ACOs were judged for a period between 12 and 21 months, depending on when the ACO launched. Medicare announced interim results in January.

This post was updated on Sept. 17 to correct the number of ACOs that owe the government money.

One-Quarter Of ACOs Save Enough Money To Earn Bonuses