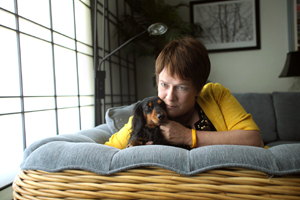 Gaps in insurance policies make oral drugs too pricey for some patients, including Jere Carpentier. She was treated last year for advanced colon cancer. (Christina Koch Nernandez for KHN)

When Jere Carpentier learned last year that she had advanced colon cancer — her third malignancy in a dozen years — she worried about spending hours in a clinic tethered to an intravenous line, enduring punishing chemotherapy that would make her hair fall out. Her veins ruined by earlier treatments, Carpentier was elated when her oncologist said this time she could avoid needles and take a pill at home that would specifically target the cancer cells and spare her hair.

“I let that be the thing that made this okay,” she recalled.

But the former human resources manager, who lives in San Jose, soon discovered that her insurer would not pay for the pill called Xeloda, which cost $4,000 per month, because a cheaper IV drug was available. So instead, she underwent surgery to implant a port in her chest through which she received 46-hour-long chemotherapy infusions, mostly at home. One night the device, which included a large needle that constrained her every move, sprang a leak and began emitting a shrill alarm, requiring a race to the emergency room. “It was the scariest thing that happened to me,” Carpentier, now 60, recalled, “and I’d been through two cancers.”

Scary and also unnecessary, in Carpentier’s view. “Surgery for the port and the ER visit alone cost more than it would have for them to cover the damn pill,” she said.

Like Carpentier, a growing number of patients are being denied access to newer oral chemotherapy drugs or are required to shoulder hefty out-of-pocket costs, sometimes thousands of dollars a month, for cancer pills with annual price tags of more than $75,000. The reason is rooted in a reimbursement system that covers IV chemotherapy as a medical benefit but considers less-invasive oral chemotherapy to be part of a patient’s drug plan, which tends to be far less generous. Some plans cap drug benefits at $5,000 annually, which can amount to less than a month’s supply of chemotherapy pills. The disparity is likely to affect increasing numbers of cancer patients, because 25 percent of 400 chemotherapy drugs in the development pipeline are oral.

A recent report by the consulting firm Avalere found that oral cancer drugs, which account for about 10 percent of chemotherapy treatments nationwide, are typically placed in the most expensive price tier in insurance and Medicare Part D drug plans, where out-of-pocket costs can reach 35 percent. People covered by Part D plans in 2010 must shell out $4,550 before they get through the coverage gap called the doughnut hole, after which they pay 5 percent.

“If a drug costs $3,000 a month, most of the patients we help cannot afford to come up with $1,000 a month,” said Nancy Davenport-Ennis, founder of the nonprofit Patient Advocate Foundation of Newport News, Va., which helps people pay for treatment. Most cancer patients, she notes, take several medicines, not just one. The new health-care coverage law will close the doughnut hole by 2020, but it does not specifically address the financial obstacles to oral chemotherapy, oncologists say.

Although some new oral drugs have demonstrated only incremental benefits, extending life for several weeks, others represent genuine advances and have transformed once rapidly fatal cancers into manageable diseases.

“I’ve got two grandkids, and I thank the Lord every day I wake up and get to see them,” said William Bunch, 65, a former factory mechanic in Suffolk, Va. On Christmas Day 2000, Bunch was told he had chronic myelogenous leukemia (CML) and a life expectancy of about two years. Soon afterward he began taking a then-experimental drug called Gleevec, which he has been on ever since. “Without it I’d die,” he said.

“Gleevec is the treatment for CML: There is no IV alternative,” said oncologist Douglas Blayney, medical director of the Comprehensive Cancer Center at the University of Michigan. “It can really give people their lives back.”

But growing numbers of leukemia patients are having trouble obtaining the drug because they can’t afford it. The Government Accountability Office recently reported that the average annual negotiated price of Gleevec in Medicare Part D plans jumped 46 percent between 2006 and 2009, from $31,200 to $45,500, raising the average out-of-pocket cost for a year’s supply from about $4,900 to more than $6,300.

Insurance industry officials say that the high cost of oral drugs, not paltry reimbursement rates, are the primary obstacle. “If you look at a drug that costs $60,000 a year, the real question is, ‘Why does it cost $60,000 a year?’ not ‘Why doesn’t a plan cover it?,’ ” said Susan Pisano, a spokeswoman for America’s Health Insurance Plans, the industry trade association. “Our member companies are trying to do everything they can, but I would say this is a real hardship for people.”

But Ken Johnson, senior vice president of the Pharmaceutical Research and Manufacturers of America, the trade association for drug companies, defended the price of oral chemotherapy drugs, citing the “very long, risky and expensive” process of developing them. Cancer drugs “deliver good economic value” and “represent a small share of health-care costs overall,” he said in a statement. Patients who need help paying for them can receive free or low-cost medicines through programs sponsored by drug companies, he said.

To Brian Durie, a hematologist-oncologist at Cedars-Sinai Hospital in Los Angeles who specializes in the treatment of multiple myeloma, the debate about cost obscures a stark reality. “Myeloma patients need access to all the drugs,” he said. “They’ve got two choices: an oral drug or death.” Some myeloma patients need an oral drug called Revlimid, which can cost more than $7,000 per month, after an IV drug stops working. The pill enables some patients to continue working and to live normal lives.
“Some of the saddest stories are patients who say, ‘I don’t want to die and leave my family with a bundle of debt,’ ” Durie said. “These are people with a lethal disease, and it is so, so stressful” for them to also wrestle with the question of how to afford potentially life-saving medication.

The issue of “chemo parity,” the requirement that insurers cover oral and IV chemotherapy equally, is popping up in legislatures across the country. Rep. Brian Higgins (D-N.Y.) introduced federal legislation last year, and parity measures have been considered in more than 20 states and adopted by several, as well as the District of Columbia. Oregon’s law, which was the nation’s first when it took effect in 2008, has expanded access to oral chemotherapy and appears to be working well, insurance regulators and oncologists in that state say.

“We need to level the playing field,” said Baltimore oncologist Paul Celano, president of the Maryland-D.C. Society of Clinical Oncology. Celano recently testified in support of a parity bill in the Maryland General Assembly; the measure did not come to a vote.

Pisano of AHIP says insurers are opposed to such mandates “because they make health care less accessible rather than more affordable” by raising costs.

Medicare officials say they are aware of the problem, but constrained from doing much about it. Medicare has little sway over drug prices, said spokesman Peter Ashkenaz. Solving the problem of unaffordable co-pays and co-insurance would require putting more money into the system or persuading drug companies to reduce prices, he said.

Steve Yarrington of Topeka, Kan., knew that the Temodar pills his doctor prescribed last year, two weeks after his surgery for a malignant brain tumor, were very expensive. But Yarrington, an unemployed automobile dealer, was shocked when he went to pick up the first month’s supply and was told by the pharmacist, “That’ll be $10,000.”

There must be some mistake, Yarrington said; the pharmacist insisted the amount was correct. “You can just keep it and I’ll go home and die,” Yarrington replied, walking out empty-handed. His wife, Kaye, who recounted the experience in an interview and in January before a Kansas Senate committee considering parity legislation, said he ultimately obtained the drug for free from the manufacturer, after his oncologist interceded.

Cancer specialists say such stories are typical. “We have to hire people to get free drugs for patients,” said Montana oncologist Patrick Cobb, president of the Community Oncology Alliance, a lobbying group composed of cancer doctors. Restricting access to oral drugs is a false economy, in Cobb’s view. Some patients denied oral drugs may deteriorate “and then go on to maybe have a bone marrow transplant for $1 million,” he said.

Jere Carpentier said she and her husband considered taking out a loan to pay for her chemotherapy pills, but decided against it. She thinks they made the right decision: Carpentier wound up needing more rounds of chemo than doctors first thought, and last November, her husband lost his job.