Dr. Brett White practices medicine differently than he did three years ago. 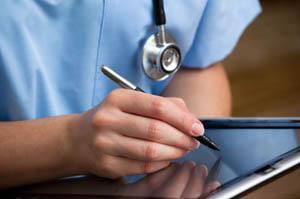 White, who oversees the clinic, says the effect was immediate. The electronic records made data available that highlighted patients who’d been diagnosed with chronic diseases like diabetes and then hadn’t been seen for a couple of years.

White described the stark realization: “Oh my goodness! We really need to reach out to that patient and make contact and bring them in to provide the care that they need.”

Some of the patients, he says, had taken their doctor’s advice and were fine. But others were in trouble: “There were … individuals who unfortunately had sustained some pretty significant medical complications.”

Now, says White, their computers track those patients and make sure they get their cholesterol and blood sugar checked on a regular basis, as well as any other preventative treatment they need. It is just the kind of change in practice that the federal health law is trying to encourage with generous financial incentives for providers who adopt electronic records.

White’s colleague, Dr. Scott Fields, described how the data is used to grade physicians on their performance. “My score card he gets to look at, and I get to look at his,” Fields says. “And my nurse gets to look at mine, etc.”

Fields says doctors tend to be competitive and, at first, the grading was difficult.

White cringes remembering his grade for getting women to take their regular mammography exams. “I think we’re biased a bit as clinicians where we think we have a really fantastic relationship with our patients on a one-to-one basis, when we’re seeing them in the room,” White says. “But to … see that there are areas, and in some cases significant areas of deficiency, it was a little disheartening.”

But White says, once most doctors saw how grading could help them improve, they were won over.

Dr. Tom Yackel is the chief health information officer at Oregon Health and Science University. It runs the clinics where White and Field work.

Yackel says the whole health care industry has been painfully slow to adopt electronic medical records: “We’ve been on par with industries such as mining, which aren’t well known for their investment in information technology. And if we compare ourselves to banking or insurance, they may spend two, three, four times as much as health care on information.”

Part of the reason, Yackel says, is that medical records are complex — they don’t just involve dollars and cents — they involve medications and personal histories.

But there’s another reason electronic records haven’t been widely adopted by hospitals.

When you ask the question: Is digitization good for a health organization’s bottom line? Yackel says the answer is: It depends. Are you’re talking about a hospital, the Veterans Administration, or an insurer?
“It has to do with who gets the benefits,” he said. “When the VA is able to do that, when [an insurer] is able to do that, they lower their costs … When a hospital that runs on fee-for-service medicine — they get paid for what they do — they get paid less.”

So, electronic records may not be a great investment for a hospital, if you are just looking at the bottom line. But they are good for whoever is paying the bill. That’s a lesson the Obama administration has taken to heart in its overhaul of the health care system. So now, it’s giving clinics and hospitals millions to give them an incentive to use electronic medical records.

And that, says Yackel, is generating mounds of data that can be mined to both save money and improve a doctor’s performance: “How well are their patients being immunized against influenza and pneumonia? How many of their patients have had their mammograms, their pap smears, their preventive care screening? What percentage of patients have x-rays or images of their back that’s not considered appropriate for low-back pain treatments. We’re just starting to gather that data and figure out how we use it to change practice.”

Now, he says, patients can log onto their computers to see their own charts, check their lab results or schedule mammograms. And that, Yackel says, stands in stark contrast to 10 years ago when he remembers wasting a significant slice of his day just trying to find each patient’s chart.

Back at Gabriel Park Family Health Center, Dr. White believes electronic medical records are good for the patient, the doctor and the bottom line. But, he cautions, they’re not the silver bullet that will slay all the nation’s health care problems. “It’s challenging to interface with a computer when you’re in a room with a patient,” said White. “But also spending a lot of time outside of the room typing. So, I don’t think we’ve hit sort of the ideal just yet.”