The spokeswoman for Oregon Health Authority says that while the state’s reputation is that “people haven’t enrolled in the new coverage available in Oregon,” in fact “that’s not accurate. We have 70,000 people.”

She’s talking about some of the state’s poorest uninsured folks. A work-around helped 70,000 of them secure coverage in its version of Medicaid. Oregon is one of the 25 states expanding Medicaid to adults who haven’t previously qualified. 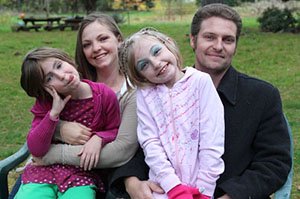 Kyle Thompson lives with his family in the farming community of Jefferson, Oregon (Photo courtesy of Kyle Thompson).

One of them is Kyle Thompson, who lives in the farming community of Jefferson, Oregon. Since his work as a tile cutter ended during the recession, he hasn’t been able to afford health care. But because his two children qualified for Medicaid (the Oregon Health Plan), the state had all the family’s income details.

So when Oregon sent out about 260,000 applications to families like the Thompsons — with incomes less than 138 percent of the federal poverty level — to enroll them in Medicaid, they jumped on the opportunity.

“I filled it out. I sent it off. Me and my wife are really excited in having the health care coming up because it’s not something that’s been an option for us,” he said.

Wentz says the letters were so successful that another batch will go out any day now. There’s already been a big impact, she says: “People will call and ask if it’s real. Can I really get health care coverage? When they hear that they can, they’re so grateful.  One call center staff told me that, the person she was talking to said, please tell everyone there, thank you, thank you.”

“I guess one could argue in retrospect we bit off more than other states,” Gov. John Kitzhaber recently said. But, he added “it was an intentional decision. We’ve got a single portal for Medicaid and for the people who are coming in that are not Medicaid eligible. And once we work out these difficulties I think the people in Oregon will be ahead of the pack.”

Marketplace officials say they’re cautiously optimistic insurance agents and navigators will be able to help customers determine their eligibility for a tax subsidy and choose a health plan by Dec. 1.

But the public in general won’t have access for a while, due to the ongoing problems with the website. Instead, a series of “application fairs” have been arranged so that everyone can use old-fashioned paper to apply in time to get covered starting in 2014.

Meanwhile, in Texas, the get-out-to-the-people approach hasn’t gotten much momentum. Only about 3,000 Texans have signed up for private insurance and the state isn’t expanding its Medicaid program. 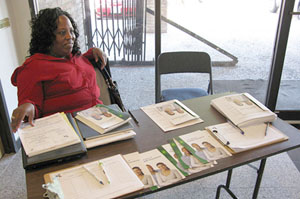 Navigator Alysia Greer hands out information about the Affordable Care Act in a medical office building on Antoine in northwest Houston. Greer works with the Local 100 United Labor Unions, which received federal money to hire navigators in the Houston area (Photo by Carrie Feibel/KUHF).

“Navigator” Alysia Greer has been trying to encourage sign-ups from a folding table in the lobby of a medical building in northwest Houston. As people walk by she offers them brochures and asks “Does everyone in your household have health insurance?”

Most walk right by, but Dorothy Green, who already has Medicaid, grabs a packet for a neighbor, “because she doesn’t drive. And she’s asking me about it and I have no idea, as well as the other folks, (I’m) confused, you know?”

Outreach organizations in Texas received more than $10 million in federal funds to hire and train navigators. But along with 16 other states, Texas has also passed a law to regulate how the navigators operate. It’s expected to go into effect in a few months, after insurance regulators write the specific rules.

Texas Attorney General Greg Abbott says he’s concerned and wants regulations that are tougher than those already in the Affordable Care Act. He’s told the Texas Department of Insurance that he wants the rules to include criminal background checks so that felons can’t work as navigators. He thinks navigators might misuse confidential information they gather while helping people sign up for health plans. “We need to have better training for these people who are — may be completely unversed in how to deal with someone’s private information,” he says.

Alysia Greer takes issue with Abbott calling her unprepared. She says patient privacy and security were a big part of her navigator training, which lasted more than 20 hours and involved several tests. She adds that Abbott may be unnecessarily frightening uninsured people and his comments could damage the enrollment effort.

“I do think it will scare some people away. Because there are a lot of people who are very influenced, of course, by what the attorney general and other people of political status say,” she says.

Greer says when she assists people while using a computer, she turns the screen towards them and away from herself, and never even sees Social Security numbers or income information.

“It’s interesting to note that many of the states that have been relatively reluctant to act and implement the federal health law in many other respects have been fairly quick to adopt these laws and regulations on consumer assisters,” Giovannelli says.

He says some of the regulations may have a chilling effect, making it hard for navigators to do their jobs.

In any case, the Affordable Care Act itself prohibits disclosure of personal information, and imposes a $25,000 fine for doing so. And navigators who did steal information would also face 15 years in prison under federal identity theft law.

This story is part of a reporting partnership that includes NPR, KUHF, OPB and Kaiser Health News.

Oregon Shines On Medicaid, As Texas Stalls On Sign-Ups