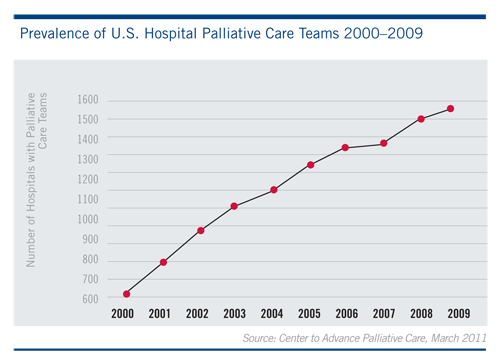 What do Vermont and the District of Columbia have in common? The two are the only jurisdictions in the country with palliative care teams in all their major hospitals, according to a new survey.

Palliative care teams are devoted to easing the symptoms, stress and pain from serious illnesses, both chronic and terminal. The new survey by the Center to Advance Palliative Care, a nonprofit affiliated with the Mount Sinai School of Medicine, and the center’s research arm, found that 1,568 (or 63 percent) of 2,489 hospitals surveyed had palliative care teams. (The survey only examined hospitals with at least 50 beds; smaller hospitals are less likely to have such specialized teams.)

The number of  hospital-based programs has grown by 138 percent since 2000 — a spurt similar to what’s happened in the hospice industry, which also aims to alleviate suffering, albeit only for the terminally ill.

But unlike the hospice industry, where most of the growth is due to an increase in for-profits, palliative care programs are more common at non-profit hospitals. They are less likely to be found in Southern hospitals.

The states where hospitals with 50 beds or more were most likely to have palliative care teams were:

Although all hospitals surveyed in the District and Vermont had palliative care teams, several small hospitals omitted in the survey in Vermont don’t have such teams. That leaves the District- – which only has big hospitals — as the only jurisdiction where every hospital patient has access to such a team.

The report argues for more financial support for palliative care, both for humane reasons and because of growing cost of treating an older population:

Studies over the past twenty years have conclusively demonstrated that too many seriously ill Americans experience treatable pain and distress and are financially devastated because of the high costs of medical care. At the same time, rising costs threaten Medicare just as millions of boomers are turning to it for health insurance coverage. Palliative care offers a logical and patient-centered approach to improving medical care by focusing on quality of life and ensuring that care is matched to patient and family goals.