Richard Oswald, still mourning the loss of his family’s homestead to flooding along the Missouri River, is planting corn and soybeans into ground that last year was feet deep underwater.

It’s probably good, he said, to not have too much time to think.

“Diversion therapy is the best treatment for farmers right now,” said the 70-year-old from Atchison County, Missouri. “Being busy helps.”

In an industry rocked over the past year by record rates of bankruptcies, suicides and mental health crises spurred by weather extremes, trade wars and faltering economics, COVID-19 has fostered even more uncertainty for the future of America’s farms. Already the pandemic has decimated agricultural markets.

For the men and women struggling to operate farms and associated businesses across the country, concerns are rising that the existing mental health crisis in farm country is about to get worse.

“If you look back over the last 20 or 30 years of U.S. agriculture, the events of the last 36 months or so couldn’t have come at a worse time,” said David Widmar, an agricultural economist with the industry analysis firm Agricultural Economic Insights. “Everyone in the economy is facing a headwind right now; it’s just that the ag space is really behind. Producers have had almost seven bad years of bad news.”

To be sure, the global pandemic has taken a toll on mental health among people in all industries. But farming was battling high rates of suicide before the crisis hit. For example, men in rural Missouri have had the highest rate of suicide deaths in the state, at 35.6 per 100,000 residents in 2017, according to a February Missouri Hospital Association report — nearly double the statewide rate of 18.8. The U.S. rate at that time was 14.

Calls to farmer assistance hotlines have only increased since the COVID-19 pandemic first caused businesses and school systems nationwide to shut down, said Jennifer Fahy, a spokesperson for Farm Aid, which runs one of the hotlines. Farmers are expressing increased concern about being able to sell their products, at what price and how this will play out.

“I don’t think it is even close to what we will be hearing after another month, or two months,” Fahy said. “There is just so much unknown right now.” 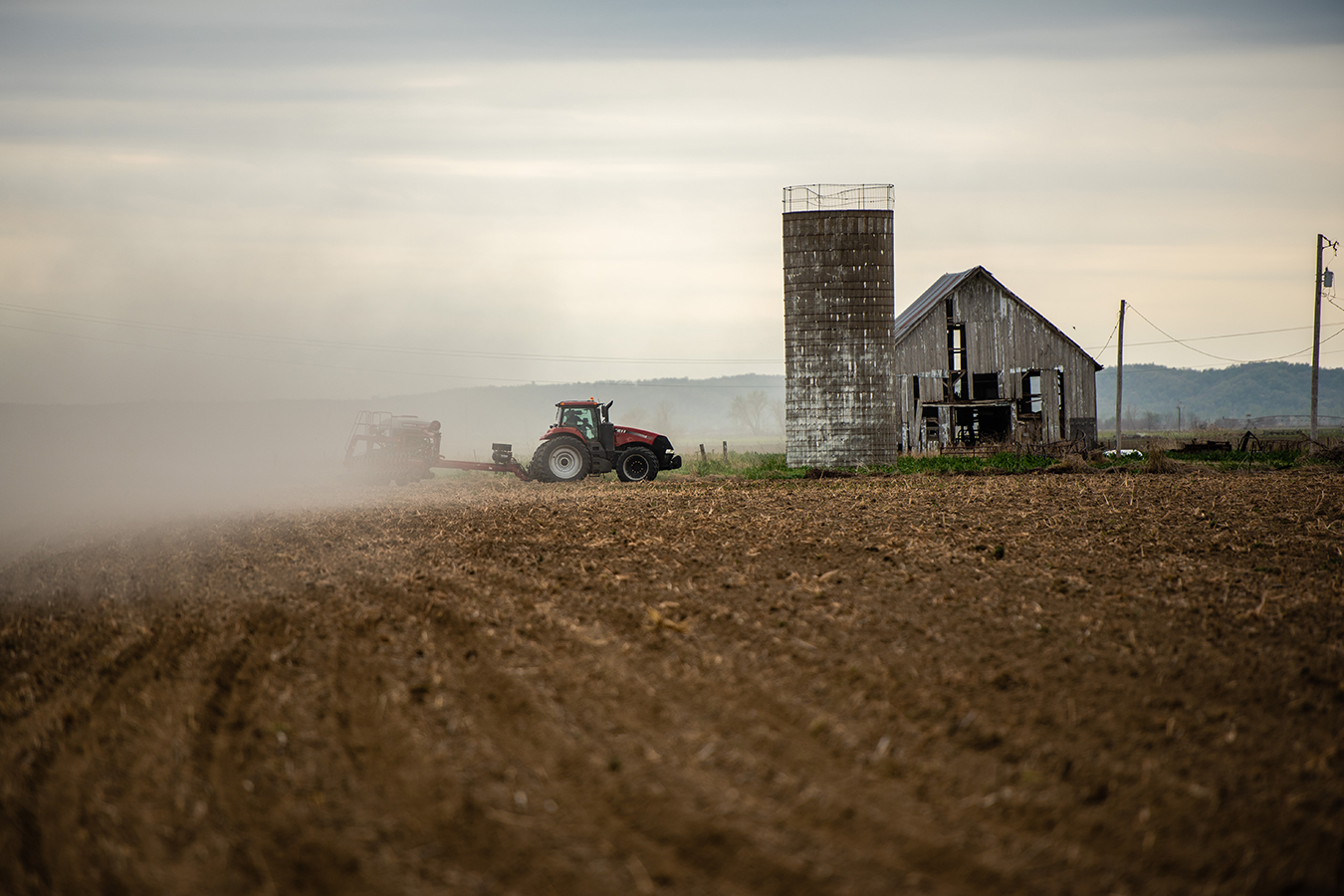 Richard Oswald plants corn on his family’s homestead in Atchison County, Missouri. A year ago, his land was feet deep underwater from flooding along the Missouri River.(Misty Prochaska for KHN)

Oswald, a fifth-generation farmer, said it is a given that crops and profitability will ebb and flow. But even before COVID-19 upended the economy, the past several years had been profoundly difficult. He has seen it in his friends, heard the stories of bankruptcies and suicide, and has felt it himself.

Oswald has seen the Missouri River jump its banks and flood his land before, although nothing quite like last year. He made it through the 1980s collapse in the agricultural markets. And while he can’t imagine not farming, he said it has not been a life without challenges.

“I can cite time after time how it’s just depressing, and it is,” he said. “And you wish you’d listened to your dad and done something else.”

Many farmers don’t carry insurance because, as independent businesses, the cost can be prohibitive. Oftentimes, a family member will work off the farm to obtain health insurance for the family. Pandemic-related layoffs have hit rural America hard, so many families have lost coverage, which may create an additional barrier to seeking behavioral health assistance.

A baked-in culture where farmers, mostly men, don’t easily express their emotions compounds the problem, Oswald and others said. Farmers are expected to face any challenge — often alone. If it is storming, they must tend to their animals or crops. If equipment breaks down, they do the repair. If the crops fail, they still have to pay the bills. If both the domestic and world market for their products collapse, they have to sell their products at a loss. 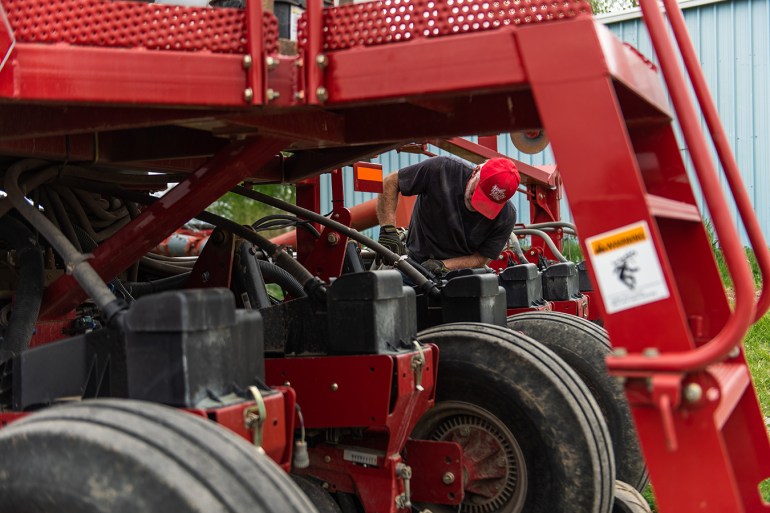 Richard Oswald oils the chains of his planter before planting corn on his farm in Atchison County, Missouri.(Misty Prochaska for KHN) 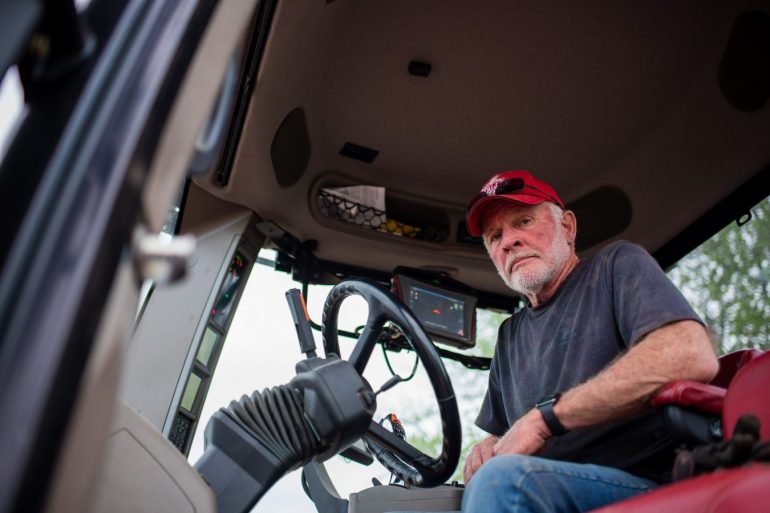 Oswald, a fifth-generation farmer, knows the mental stress of his livelihood. “Diversion therapy is the best treatment for farmers right now. Being busy helps.”(Misty Prochaska for KHN)

Farming is already one of the most hazardous industries, with a high rate of fatal injury as well as a high rate of death due to stress-related conditions such as heart disease. Farmers often work in solitude. While efforts to reduce the stigma associated with seeking mental health care have found success, the fear of being found out still exists.

“If you acknowledge it, it is a sign of weakness,” Oswald said. “You don’t show your weakness. You’re not allowed to be weak. You have to be strong. And if you get to the point where you can’t be strong anymore, then you have betrayed everybody.”

Multiple programs were established in recent years to address rural mental health issues, including telehealth, video-conferencing platforms, Farm Aid’s farmer hotline and its farmer assistance fund, and Michigan State University’s Stress Management Train-the-Trainer Program. They are all designed to help lift them out of their mental health crises.

“Over the last 15 to 20 years, there has been substantial progress in reducing that kind of stigma, and building better on-ramps to help access mental health resources and services in rural communities, and getting adequate support for rural mental health professionals,” said Sean Brotherson, an extension family specialist at North Dakota State University.

But then the bad got even worse when the pandemic hit. While a burst of panic buying occurred initially, the loss of the restaurant and school markets has been a new and huge economic blow to American agricultural producers. Ethanol and biodiesel markets fueled by America’s row crops are collapsing, and meat and pork processing plants shut down due to virus clusters found at their facilities. Many milk producers suddenly found themselves without large-scale clients, and with no way to quickly adjust packaging or to sell their product for other uses.

With major processing plants not operating, smaller local and regional operations in Kansas filled up fast — with few, if any, open slots until September, said Matt Ubel, who farms 320 acres in Pottawatomie County, Kansas, with his brother. He feels lucky to have found a small-town butcher to take his hogs in July. He said a neighbor recently called asking for help finding a processor to take his hogs, which are already overweight.

“You could tell he was pretty nervous and worried,” Ubel said. “It’s his only income.”

Constrained by laws, regulations and the fundamentals of the food system, many farmers who lost their buyers are stuck with product they cannot distribute elsewhere.

But loans have been secured for the year, based, in part, on projected yields and sale prices made before the pandemic. They must be repaid at the end of the year. For now, it seems likely that the collapsing agricultural markets will force more farmers into insolvency, said Widmar.

“Farming is so much of an identity, and that concept of it being a family identity that has been passed down through generations,” Fahy said. “And now today’s farmers are faced with: ‘Am I going to be the generation that loses the farm?’”

Michael Rosmann, an Iowa psychologist and a farmer, said the uncertainty is what is so difficult psychologically. “It’s a real serious problem for farm producers right now,” he said.

“Going into spring, it was like farmers were saying ‘Do you smell smoke?’” said Oswald, who farms specialty corn and soybeans with his son. “Now we realize something’s burning, and it’s in the attic and in the basement. Which fire do you put out first?”

Oswald participated in a Train-the-Trainer program at a conference before the pandemic. It was an eye-opening experience, he said, that taught him how to help others. It also allowed him to confront his own struggles.

Originally, his local farmers union planned to hold meetings to train people in stress therapy. But social distancing and the obligations of the planting season arrived.

“Unfortunately, that’s not an option right now,” he said. “The main thing I’ve done is to use social media. But, as the weather has warmed, I’ve been busy with my own diversions. If there’s anything positive, it’s that everyone has problems right now. So, we are not alone.”