Three people injected with an unauthorized herpes vaccine by a Southern Illinois University researcher have filed suit against his company, demanding compensation for alleged adverse side effects from the experiments.

SIU professor William Halford, who died in June, had injected Americans with his experimental herpes vaccine in St. Kitts and Nevis in 2016 and in Illinois hotel rooms in 2013 without safety oversight that is routinely performed by the Food and Drug Administration or an institutional review board.

Two of the participants who filed the lawsuit, Elizabeth Erkelens and Ed Biel, received the vaccine in the Caribbean trial, according to the lawsuit. The third participant, Terry Graham, was injected in two Illinois hotel rooms, it states. 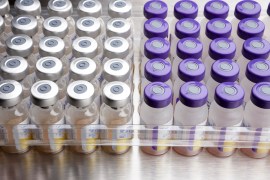 A university researcher’s quest to find a new herpes vaccine raised broad questions of safety and academic and corporate governance, as reported by KHN’s Marisa Taylor.

The lawsuit, which was filed Friday in an Illinois circuit court, demands compensation from Halford’s company, Rational Vaccines, alleging his research violated U.S. and international laws aimed at protecting the rights of participants in experiments.

Alan Milstein, a New Jersey lawyer representing the three participants, said his clients believe they should receive compensation not only for their medical costs, but also “pain and suffering” and loss of “dignity.” Milstein said he is still exploring legal options against the university, which shared in the vaccine’s patent, set up a business account to collect donations for Halford’s research and promoted his work.

“My clients are anxious to ensure such unethical experimentation on human subjects are not repeated,” said Milstein, who specializes in such cases.

A spokesman for Rational Vaccines did not respond to a request for comment. Earlier, the company had said that it plans to continue testing the vaccine and hopes to eventually secure approval from the FDA, although it’s unclear how it could without oversight from the federal government.

Halford co-founded Rational Vaccines with Hollywood filmmaker Agustín Fernández III in 2015. The company has since received millions of dollars in private investment from billionaire Peter Thiel, who contributed to President Donald Trump’s campaign. Thiel has declined to comment on his investment.

Rational Vaccines has said it considers the 2016 trial a success — though it is unclear what data it used to support that claim.

Another participant, Richard Mancuso, has publicly asserted the vaccine cured him of herpes.

The lawsuit comes as the university is still investigating what it now describes as Halford’s misconduct.

SIU, a state university with a medical school in Springfield, Ill., initially said it bore no responsibility for the experiments because Halford conducted the research independently. After Kaiser Health News raised questions about Halford’s practices, the Department of Health and Human Services asked the university to determine whether his activities violated the institution’s pledge to HHS to follow human-subject safety protocols for all research.

SIU has since acknowledged that Halford’s conduct violated university rules and U.S. laws but said that Halford hid his misconduct from the university. The investigation probing his research and the help he might have received by other SIU employees is ongoing.

The dean of SIU’s medical school, Jerry Kruse, has refused multiple requests by Kaiser Health News for an interview, but in a statement he said he and other university officials knew nothing about improper research methods. Sen.Chuck Grassley, an Iowa Republican who is known for pushing for accountability on such matters, demanded a response from HHS and the university about their handling of the controversy. HHS’ Office for Human Research Protections, which is supposed to monitor such violations, may not investigate the matter, HHS told Grassley.

“OHRP expects that SIU’s forthcoming report will provide sufficient information … to determine whether the office has jurisdiction,” Matthew Bassett, the HHS assistant secretary for legislation, wrote Grassley in a letter obtained by KHN.

Remdesivir, Given to Half of Hospitalized Covid Patients in U.S., Is Big Win for Gilead — Boosted by Taxpayers

If I Have Cancer, Dementia or MS, Should I Get the Covid Vaccine?