As anyone who has been a patient or a visitor at a hospital knows, they’re often confusing, chaotic places. By the time you learn the routines and the rules, with any luck you’re recovered and on your way out the door.

Elizabeth Bailey’s father wasn’t that fortunate. When he started experiencing double vision several years ago at age 81, he had a biopsy performed on an outpatient basis at a New York hospital to determine if he had a rare and dangerous inflammation of an artery near his temple. He didn’t, as it turned out. But things went downhill from there.

He had been prescribed a high dose of the steroid prednisone before the biopsy to prevent inflammation, and his post-op instructions said to continue all pre-op medications following surgery. Unaware that this referred only to drugs he had been taking on a regular basis, he kept taking the powerful steroid and even refilled his prescription.

A few days later, he wound up in the emergency room with steroid-induced psychosis. Not only that, but his previously mild Type 2 diabetes had worsened significantly and his blood sugar had increased to dangerously high levels. Doctors said it was probably the rising blood sugar levels that had caused his double vision in the first place.

Bailey and her two sisters took turns at their dad’s bedside during the month he was in the hospital. Almost immediately, things started to go wrong when they weren’t around: He was given standard meal trays instead of the sugar- and salt-free food his doctors had prescribed; the sisters discovered pills he should have taken on the floor and in his bedclothes; after an MRI scan, he was left for hours sitting in a wheelchair in a hallway, waiting for someone to pilot him back to his room. One morning, he put some clothes over his hospital gown, went down to the lobby and hailed a cab to take him home. No one at the hospital noticed until midafternoon, when Bailey arrived and raised the alarm.

“I think the biggest mistake patients [and caregivers] make is that they think hospitals will take care of everything,” says Bailey, a former music video producer who is completing a master’s degree in health advocacy and plans to work with hospital patients. “It’s that psychology of being the passive patient that can be such a problem.” 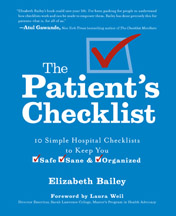 After so many missteps, another person might have quietly taken note never to use that hospital again — or filed a lawsuit. Bailey instead developed “The Patient’s Checklist,” a book of 10 checklists that address many of the essentials for a hospital stay, including sections on what to bring with you, medication management, how to make your hospital stay safer and more comfortable, and planning for your discharge.

The idea came from Bailey’s work in film production, where she always kept lists spelling out details about crews, shots, equipment and the like. The hospital “reminded me of a really badly run film set, and I just thought, ‘I need to produce this,’ ” she says.

“Checklist” has become something of a buzzword in health care in recent years. Many hospitals have embraced the idea for their staffs, aiming to improve patient safety and quality of care by ensuring that basic but critical steps are taken every time certain activities or tasks are performed. Checklists may cover everything from how to change the sheets on a bed to steps to reduce surgical complications. In a seminal study published in the New England Journal of Medicine in 2006, roughly 100 Michigan hospitals that adopted a simple five-step checklist for inserting central-line catheters in intensive-care patients reduced bloodstream infection rates by up to 66 percent over an 18-month period.

The checklist included seemingly no-brainer steps such as requiring staff members to wash their hands and wear sterile gowns and gloves. But that’s part of the point: Many procedures are routine, caregivers are busy and small omissions can have disproportionately bad results.

“There’s a lot that’s art in medicine,” says Peter Pronovost, director of the Armstrong Institute for Patient Safety and Quality at Johns Hopkins School of Medicine, who was the lead author on the NEJM study. “But some things we’ve figured out. Patients are always going to be worried, but checklists allow them to worry about the things that really matter.”

According to a watershed report published by the Institute of Medicine in 1999, medication errors in hospitals account for up to 98,000 deaths every year. Some experts suggest the number is probably higher.

The checklists in Bailey’s book include templates for patients or relatives on managing hospital medications, including a master medication list that describes every drug being taken, the frequency, dosage, prescribing doctor’s name, special instructions and more, as well as a daily medication log where patients can keep track of every pill, injection and IV drip they’re given each day.

Another list covers details such as getting to know the names of every nurse and aide, regularly wiping down surfaces such as call buttons and the TV remote with antibacterial wipes, and staying warm and hydrated to promote faster healing.

Of course, being an assertive patient may not make you popular with overworked hospital staff. “Oftentimes, my tribe – the physicians or nurses — aren’t very welcoming of questions,” says Pronovost.

In such cases, Bailey says, a little diplomacy goes a long way. “I start from the place of ‘We all have a common goal, which is the best possible outcome for this patient,’ ” she says. ” ‘We’re on the same team, and I need to understand my care.’ That’s very legitimate.”