Should a physical therapy session cost a patient as much as a visit to a neurosurgeon or other specialist? 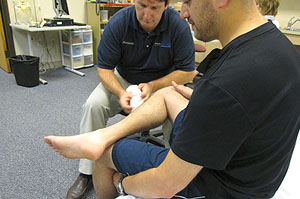 They are backing proposals in several states to limit the amount insurers can require patients to pay for physical, occupational or speech therapy. Legislation is pending in Pennsylvania, Missouri and New York.  Lawmakers in South Dakota and Kentucky have already passed measures.

While the proposals vary, the majority would require insurers to make patient co-payments no more for a therapy session than an office visit to a primary care doctor.

In the case of physical therapy, a growing number of insurers and employers classify those visits as specialty care, so patients generally pay a higher copayment, often the same amount as for a visit to a specialist, such as a surgeon, neurologist or cardiologist.

“It’s gotten out of control in a number of states,” says Justin Elliott, director of state government affairs for the American Physical Therapy Association. “We’re seeing some cases where a visit to a physical therapist is as high at $75. If someone has a knee replacement or a stroke and needs physical therapy two times a week for six months, that really racks up a bill.”

“Anytime you have benefit mandates, it results in more expensive coverage (premiums) and in some cases, can inhibit patient access,” says Robert Zirkelbach, spokesman for America’s Health Insurance Plans, the industry’s lobbying arm. Laws requiring insurers to charge patients for therapy sessions in the same manner as for primary care visits, he said, means those employers or consumers who want higher copayments in exchange for lower premiums won’t have the choice.

The majority of employees who get insurance through their jobs face some kind of copayment for a doctor office visit.

Nationally, the copayment for primary care office visits averages $22, while a specialty visit is $32, according to an employer survey by The Kaiser Family Foundation/Health Research & Educational Trust. (KHN is an editorially independent program of the foundation.)

Copayments are one way employers and insurers try to slow the rise in premiums, by shifting some of the cost of care to workers and policyholders.  The copayment is a portion of what is paid to the medical provider, with insurers picking up the remaining tab up to a maximum amount negotiated with the doctor, therapist or other provider.

Physical therapists specialize in musculoskeletal problems, but they argue that patients should not be charged the same amount as for seeing specialist physicians. Therapists are generally not physicians.

Kentucky’s law, passed last year, requires that copays for physical or occupational therapy be no more than those charged for a primary care physician visit. In February, a similar law was passed in South Dakota and goes into effect in July.

Patients Can Pay Most of the Tab

The New York Physical Therapy Association has tried since 2009 to get lawmakers to pass a measure to limit copayments to no more than 20 percent of the total amount an insurer pays for a session. The therapist would still receive the same amount of money for the visit, but the insured patient would pay a smaller overall share of it. The proposal has not been voted on by committee.

As it now stands, the New York association says, patients can end up paying the majority of the cost of a visit.

For example, insurers often limit total payments to $42 to $50 for a physical therapy session, according to an example on the group’s website. If the patient’s specialty copayment is $40, the patient is paying 80 percent to 95 percent of the cost, leaving only a small tab for the insurer.  For other specialties, such as cardiology, the total cost agreed to by the insurer is likely higher, so the same $40 copay represents a smaller share of the overall bill.

“They either don’t come for therapy at all, or instead of coming for the prescribed eight to 10 visits, they come for only four, which increases the chance they will have to face surgery or further (prescription drug) treatment,” says Hyland.

Patient Tina Feingold, a 45-year-old kindergarten teacher in Forest Hills, N.Y., suffering with a herniated disc, supports the proposed law. Last June, her copayment for specialty care – under which physical therapy is included – went from $35 to $50.  As a result of the change, Feingold says she’s going to cut back her twice a week therapy sessions.

“I really can’t afford it,” says Feingold, even though she says the therapy helps her stay on her feet at work – and to sleep at night. “It gets the pain out of the way.”

If the law passed, her cost would be 20 percent of the average allowed amount her insurer pays for a physical therapy session.  That could be as little as $15 based on a $75 average charge for a physical therapy visit in her area, an online cost estimator from Fair Health, according to a nonprofit that tracks payments made for medical and dental care nationally.

Lost on the Frontline: Explore the Database