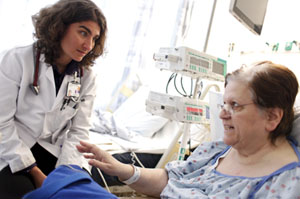 Dr. Katherine Hochman listens to a patient at Tisch Hospital, part of the NYU Langone Medical Center in August. (Photo by Brian Ach for KHN).

Indeed, during her brief stay to receive a pacemaker, Ms. Schwartz, an 88-year-old retired state worker, had a litany of complaints. Sure, the nurses were “splendid, warm and kind” and sang in her room — and her operation went off without a hitch. But her sink was too small, she had to wait eight hours in the radiology unit for an X-ray, and no one brought her anything to read as she had requested.

“If people are down here, wouldn’t it be nice if they could look at a cheerful magazine?” she asked.

Winning praise from patients has become a pressing — and often elusive — obsession for NYU and for hospitals nationwide. In the coming months, Medicare will start taking patient satisfaction into account when reimbursing hospitals. Disgruntled patients will mean reduced revenue, a frightening prospect for hospitals already facing empty beds because of the recession and pressure from  insurers to hold down costs.

Medicare’s new rule, mandated in the Affordable Care Act, pits hospitals against one another in a competition to best satisfy patients; those with the best scores will receive more money.

But some hospitals are worried that assessments from patients like Ms. Schwartz can be influenced not just by the quality of their care, but also by amenities such as single rooms, renovated units and tasty food. And hospitals in cities and certain regions, such as the Northeast and California, tend to get lower ratings, raising concerns that their revenues will be reduced simply because patients in those places are more disposed to grumble about things that a polite Midwesterner or Southerner would forgive.

“Hospitals are going be punished financially by the federal government for things they can’t control,” said Dr. James Merlino, chief experience officer at the Cleveland Clinic.

Surprisingly, some of the nation’s most prestigious hospitals, including Cedars-Sinai Medical Center in Los Angeles and the University of Chicago Medical Center, get lower marks from patients on most areas of patient experiences, according to the government’s Hospital Compare Web site.

So do many of New York City’s elite institutions, including NewYork-Presbyterian Hospital, the Mount Sinai Medical Center and Beth Israel Medical Center. Some hospitals such as NYU get bad patient reviews even as they score average or superior in measures of clinical care from the government and accreditation groups.

“People in New York have very high expectations about what it means to be taken care of,” said Dr. Katherine Hochman, an NYU physician. “When they don’t get their food on time and have to spend eight hours in the emergency department, well, that’s just not their image of what a world-class institution is.”

Medicare Is A Tough Grader On Surveys

The ratings are based on Medicare-approved surveys, which hospitals hire companies to give to a random selection of patients after they are discharged. Some survey are given by phone, others by mail. All ask the same questions: Did the doctors and nurses communicate well? Was pain well controlled? Was the room clean and the hospital quiet at night? The surveys go to both Medicare and younger patients.

In setting payment, the federal Centers for Medicare and Medicaid Services plans to be a tough grader. It is going to give hospitals credit only for patients who say their experiences were always good. The surveys also ask patients to rank their stay on a 10-point scale, and Medicare will only credit hospitals that receive a 9 or 10.

That is likely to be a tough threshold for hospitals. Interviewed weeks after her stay, Ms. Schwartz was much more positive about her experience, saying she had “a wonderful time,” but still she was not sure whether NYU deserved more than eight points.

Hospitals’ initial scores will be based on reviews of patients discharged since last July. Starting next October, CMS will withhold 1 percent of Medicare’s regular reimbursements to most hospitals and redistribute that money based on how they performed compared with other institutions and how much they improved from the previous year. That bonus amount will rise to 2 percent in 2016.

CMS has decided that patient experience ratings will determine 30 percent of the total bonus payments, more than the hospital lobby favored. The other 70 percent will be based on how often hospitals follow clinical guidelines for basic care, such as giving patients the right medications to avert blood clots and infections.

CMS hopes that commercial insurers will also incorporate patient experience scores into their payments. One major insurer, Wellpoint, already has.

Small Changes Can Have A Big Impact

Hospitals have long catered to patients in an effort to draw more customers and beat out competitors. It is one of the reasons so many renovate and rebuild their facilities. Many are finding that small changes, such as having nurses visit rooms hourly, often improve patients’ responses to the surveys more effectively than do new hotel-like amenities.

Jefferson Regional Medical Center in Pittsburgh expects all employees, from maintenance workers to doctors, to respond to a patient’s call light or find someone to offer assistance. In Los Angeles, Cedars-Sinai is testing new patient call buttons that ring directly to nurses’ cellphones. If the nurse’s line is busy, the call automatically rolls over to another worker’s phone.

Many hospitals have devised detailed scripts that doctors and nurses follow when interacting with patients, telling them what to expect and often extolling the care they are getting. This fall, the University of Toledo Medical Center launched an internal “iCARE University” dedicated to training employees on improving patients’ experiences.

In Connecticut, Bridgeport Hospital improved some of its lowest scores in its maternity unit after delivery nurses began telling patients how great the post-partum nurses are, said Eileen Callahan, the nurse manager for the maternity unit.

When the mothers and their babies are brought out of the delivery room, “the post-partum nurse greets them at the desk and starts the ‘oohs’ and ‘ahhs,’ and how lucky they were to have the nurse in the delivery,” Ms. Callahan said. She said initially there was “some hard swallowing going on” during exchanges for nurses who did not like each other. Ms. Callahan said she bases a portion of her nurses’ annual reviews on how well they followed these patient transfer practices.

Other hospitals are trying to game the system, said Paul Alexander Clark, a consultant to health system executives. He said some seek to influence patients’ memories by instructing the staff to repeat phrases used in the post-discharge surveys. “The problem of teaching  the test is caregivers are more focused on the right words rather than the right care,” he said.

Another concern is that the ratings system may hurt hospitals that handle many complex cases. Mr. Merlino said the Cleveland Clinic’s own research shows the longer a patient remains hospitalized, the less the patient thinks he is getting adequate attention and the lower ratings he gives the hospitals.

Depressed patients also tend to give more negative assessments, Mr. Merlino said. The hospital gets below average reviews on several questions, even though patients in the same surveys overwhelmingly say they would recommend the clinic to friends.

Medicare says that the surveys adequately take patient medical conditions into account by asking patients about their health.

Not ‘A Feel-Good Kind Of Thing’

Jean Moody-Williams, director of the quality improvement group at CMS, said the topics probed by the surveys, such as whether patients received proper instructions on what to do after they left the hospital, relate directly to important quality-of-care matters and will force hospitals to focus on them. “It’s not just a feel-good kind of a thing,” she said.

Hospitals with lower scores fear that the new payments could widen the gap between those that have money to invest in improvements and those that do not. In particular, hospitals with older facilities believe they will have a harder time getting good reviews than hospitals with newer buildings.

When NYU moved its cardiology unit to a renovated floor in 2008, patient rankings shot up even though the procedures and staff were the same. NYU found that long waits at its elevators drove down its scores, so now it is building a new bank of elevators. Double rooms and cramped emergency rooms invariably lead to more noise and annoyances, but NYU said that it cannot fully solve that until it opens a new building in 2017.

“Those amenities are really important,” said Dr. Robert I. Grossman, NYU’s chief executive officer. Still, he said he believes that “institutions have total control over the medical quality, and that’s what I think they should be judged on.”

NYU is scrambling to find lots of little ways to please patients. Nurses in the emergency room are instructed to greet people at the door within 30 seconds. Several floors have started happy hours, bringing chips and cookies for family members. The maternity ward has been experimenting with giving  women cellphones so they can text their nurses. When new mothers leave, they are given cards signed by all the doctors and nurses.

“We have a lot of overachievers, and they want to overachieve with their babies,” said Karen Goodman, the nursing manager for obstetrics. “Our patients are upper-middle-class, educated women, and we’re telling them, ‘You have a roommate, you have to share a bathroom.’ We have to go over the top, because no one’s going to recommend the environment.”

Like many hospitals, NYU has patient advocates who handle nonmedical problems. On a cancer unit, one advocate, Jo-Ann Delgado, visited patient after satisfied patient. “The service is just wondrous,” one told her.

But she got an earful from another, complaining that an elevator operator had turned away someone who tried to get on, saying that that the elevator takes only freight.

“I was beginning to have stress pain in my chest, that’s where my tumor is,” the woman told Ms. Delgado. “Her haughtiness got to me.”

Ms. Delgado responded, “I’m glad you told us that, because she has to know patients come first.”

Some patients remain reluctant to give superlatives. Charles Doheny, a 60-year-old hip surgery patient from Bayside, Queens, said he would give NYU an eight, although he said his doctors and nurses always communicated well and helped moderate his pain.