Mind the gap. When the 2015 open enrollment period begins on Nov. 15 for plans sold on the individual market, consumers should act promptly to avoid a gap in coverage.

Failing to do so could not only leave you exposed to unexpected medical bills—hello, appendicitis!—but you could also be hit with the penalty for not having health insurance that kicks in if you’re without coverage for three months or more during the year. The coverage requirement applies to most people in group and individual plans unless they qualify for a hardship or other type of exemption. 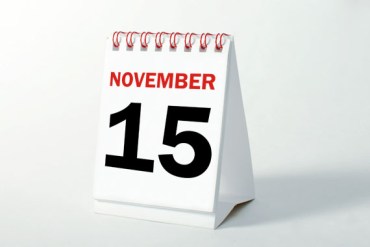 The open enrollment period runs through Feb. 15, 2015. But if you bought a plan last year and need to renew your coverage, you must do so by Dec. 15 if you want it to start Jan. 1.

In general, you must buy a plan by the 15th of the month in order to have coverage that starts the first of the next month. So if you buy a plan on Dec. 16, for example, your coverage won’t start until Feb. 1.

If you don’t have insurance and you buy a plan by Feb. 15, your coverage will begin by March 1 and you’ll avoid owing the penalty since your coverage gap will be less than three months.

Last year, the marketplaces got off to a bumpy start and many people weren’t able to sign up for coverage before open enrollment ended on March 15. The federal government allowed anyone who got their application started before the deadline to avoid the penalty.

This year, President Barack Obama has vowed that the marketplace will function on time. “We’re really making sure the website works super well before the next open enrollment period.  We’re double- and triple-checking it,” he told reporters last week.

There is also another way that people can be affected by the coverage gap.  For people who are receiving premium tax credits but lose or drop their coverage, health plans are required to allow them a 90-day grace period to catch up with their premiums if they fall behind, as long as they’ve already paid at least one month’s premium that year. But they don’t have 90 days before the coverage gap countdown starts. If after three months someone still hasn’t paid what he owes, his coverage would be terminated retroactive to the beginning of the second month of the grace period.  In that case, the penalty clock for not having coverage would start ticking after the first month of nonpayment, says Judith Solomon, vice president for health policy at the Center on Budget and Policy Priorities.

People who aren’t receiving premium tax credits on the exchange would be subject to state laws regarding grace periods for nonpayment. Typically they’d have 30 days to pay up, Solomon says.

If you lose your job-based health insurance, you’ll have 60 days after your coverage ends to sign up for new coverage. This “special enrollment opportunity,” as it’s called, would count toward a gap in coverage.

Although people are limited to a single coverage gap of less than three months annually, some may be able to sidestep the issue.

“If you have coverage on any day during a month you’re considered covered for the month,” says Solomon.

Pay Close Attention To The Enrollment Calendar To Avoid Penalties