BOSTON — The orthopedic surgeon sounded so confident. Lindsay Norton’s scoliosis was getting worse, constricting her lungs. Straightening the spine would improve the 13-year-old’s breathing. 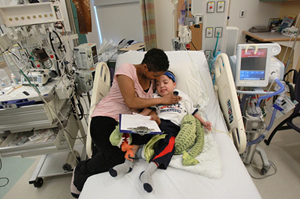 “Then I got home, and I thought, ‘huh?’ ” said Diane Norton, who cares for her disabled daughter at home. She turned to PACT.

PACT – the Pediatric Advanced Care Team at Children’s Hospital Boston and the Dana-Farber Cancer Institute — has worked with the Norton family for nine years. The doctors, nurses, and social workers, trained in the relatively new specialty of pediatric palliative care, manage complex pain and symptoms while supporting families as they navigate bewildering medical terrain, set goals of care, and make tough decisions that match those goals.

See video of the Pediatric Advanced Care Team at work:

Lindsay suffered seizures as a newborn, and the family knew early on that she would have limitations. It wasn’t until she was 4 that they learned that her rare neuromuscular condition was degenerative. She cannot speak, has a feeding tube and is in a wheelchair. Her mother is profoundly grateful that Lindsay has lived 13 years. She knows the future is unknowable.

“I just want to make the best decisions,” she said, stroking the long hair of her daughter, meticulously groomed down to her polished fingernails, during an outpatient appointment with Children’s palliative care director, Dr. Joanne Wolfe, and social worker Marsha Joselow. Their hour-plus meeting included an assessment of the gurgling sounds in Lindsay’s chest, a review of her many medications, a quick check on how big brother Craig was coping with the stressful college application season.

Norton’s instinct, supported by Wolfe, was to go slow on the scoliosis surgery. She would go back to the orthopedist, accompanied by a PACT professional, so that everyone would have a more nuanced picture of Lindsay’s likely trajectory, with or without the operation. They would consult with an anesthesiologist, for more insight into how her fragile body would hold up during surgery and the recuperation. Then they would pause, reflect and reassess. The final decision would be Diane Norton’s.

Getting Help While Continuing Treatment

About 1.3 million babies, children, and adolescents live with serious or life-limiting illness, such as cerebral palsy, heart defects, metabolic disorders, and cancer, Children’s Hospice International has estimated. Around 53,000 die each year, according to the National Hospice and Palliative Care Organization.

Hospice can and does help dying children (although not all hospices work with dying children.) Palliative care arose, in part, because many of these children and their families need an interdisciplinary approach for months or years, not just at the close of a child’s life. Teams such as PACT can address complex and distressing symptoms, including shortness of breath, nausea, anxiety, and hard-to-control pain.

Hospice usually requires that patients stop curative care. But parents can’t always bring themselves to give up that last slender thread of hope that one more treatment, one more surgery, one more hospital stay could bring forth a miracle. Palliative care doesn’t force that stark choice on families. They can have both palliative and curative care.

Massachusetts, as part of its health insurance overhaul in 2006, required that dying children have access to both hospice and other care and built a statewide palliative care network for kids, according to Margaret Murphy, executive director of the Hospice & Palliative Care Federation of Massachusetts.

The year-old federal health law allows terminally ill children in Medicaid and the state-based Children’s Health Insurance Program to have hospice or palliative care, without having to stop chemotherapy or other disease-fighting therapies. Medicare will test similar concurrent care models for adults. With adults, palliative care can save money. With children, people don’t talk much about the cost, just about the need.

‘We Want To Get Out Of Here’

Some children with life-threatening illnesses will be cured or stabilized. Others are not so lucky.

Nicky and Rick Nault have three children. The oldest, Janessa, is healthy. Their two sons have disorders that affect a part of cells in their bodies called mitochondria. Isaiah, the older, is doing OK. Little Avery, 4, is not. He lies in his hospital bed at Children’s, encircled by his big toy dragon, making funny faces with a favorite nurse, looking a bit suspiciously at strangers in case, his mother explained, they’ve come to suction his respiratory secretions.

“We want to get out of here in the next few days,” Nicky Nault told Joselow. At home, the little boy can sleep in his own bed, laugh with his brother, sister, and dog. But when they tried to take Avery home a few weeks ago, they got only as far as a service station down the block from the hospital before turning around. Avery was having trouble breathing.

Last summer, when Avery was hospitalized for six weeks and needed a ventilator to breathe, his parents faced a difficult situation. “We began to realize we could lose him,” Nicky Nault said. “Do we have a year? Two years? We don’t know. We had to step back and make a lot of decisions.” The palliative care team keeps Avery comfortable and pain-free while they help the family grapple with how much is too much — when do the burdens of modern medicine outweigh the blessings.

“It is what it is,” she said, “a nasty disease that will take him from us.”

Kevin “AJ” Amaral, 15, hasn’t even gotten as far as that gas station.

He was born with a metabolic disorder but was able to function well and enjoy life. He walked, talked - and laughed. He attended school. According to a sign posted on his hospital door, he loved wrestling, Sponge Bob, silly jokes and rude digestive noises.

In the fall of 2009, he came down with the H1N1 flu. Complications included a stroke. He was hospitalized with ferocious full-body spasms. His mother, Ann Gauthier, calls them “torture.” He passes his days in a wheelchair or in bed and can’t speak much, only in a whisper, struggling to be understood.

He has spent every day and every night in a hospital or rehab room since Nov. 6, 2009, almost 17 months ago. The blue-eyed kitten his mother chose to greet him at home is no longer a kitten.

Gauthier seldom leaves his side. With each infection, each complication, each disappointment, the family has had to adjust to what one PACT team member called a “new reality.”

“He gets up every day and tries. Every day,” said Dr. Rick Goldstein, who left his more traditional pediatric practice to take care of these seriously ill children. Earlier this month, Goldstein scheduled a PACT meeting “so everyone can come together and think about getting AJ home.”

That will require taming the spasms, a special wheelchair, setting up home care, and coordinating with all the other doctors treating the problems that ricochet from one vital organ to the next.

Mark Toro, 15, a beautiful child with deep brown eyes and chiseled cheekbones, was diagnosed at age 4 with neuroblastoma, a rare cancer of the nerve tissue. He had one year of treatment, followed by three good years. But the cancer came back. Working alongside oncologists, PACT helped get Mark through years of physical and emotional pain of cancer treatment, when there was hope for a cure, and when that hope faded.

A few weeks ago he came from his home in Amherst for an appointment at Dana-Farber. His disease was advancing; pain control was a challenge, which the palliative care team attacked with pills, patches, and pumps. His mom, Ana Rosa, had filled her freezer with Fudgsicles. They didn’t upset his stomach and gave him a few moments of frozen chocolate pleasure.

Mark understood but didn’t want to talk to a reporter. He gestured to his mother to speak for him.

“We have emotional moments, family conversations,” she said. “When we’re alone, him and I, he tells me he’s not afraid, he’s not afraid to die, that I don’t need to be so emotional, that he’s going to be OK.”

PACT had accompanied them every step of the way; Rosa had a rock-solid certainty that they would be there for the difficult steps to come. She wondered aloud how she would get through it.

“This is all I know. What am I going to do right after?”

She turned to her son with her answer. “You will be on my right shoulder,” she said. “My little angel.”