The leading group of U.S. pediatricians says it’s now time for boys, as well as girls, to be vaccinated against human papillomavirus.

The American Academy of Pediatrics has updated its guidance to parents and doctors in favor of routine immunization for boys against the virus. 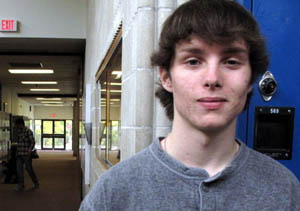 Connor Perruccello-McClellan, a senior at Providence Country Day School in Rhode Island, has been vaccinated against HPV, something less than 1 percent of U.S. males can say (Photo by Richard Knox/NPR).

Previously, the group had said it was OK to vaccinate boys against the HPV, but it only became part of the pediatricians’ official schedule of recommended vaccines this month.

HPV can cause cervical cancer. And girls have been the prime focus for vaccination, though that has stirred controversy almost from the start.

The vaccine is most potent if given before the onset of sexual activity. Boys and girls should be vaccinated when they’re 11 or 12, the doctors say. Older boys and young men, ages 13-21, should get the vaccine, if they weren’t immunized earlier.

Last year, the Centers for Disease Control and Prevention recommended that boys also get the vaccine, paving the way for the pediatricians’ decision. Immunizing boys against HPV can help curb the spread of the virus to girls.

Side effects, such as pain and redness at the site of injection, are generally mild.

The vaccination is expensive. Full immunization takes three shots (either with Merck’s Gardasil or GlaxoSmithKline’s Cervarix), which run about $100 or more each.

The cost-effectiveness of vaccination for boys is an issue. The recommendation notes that “a range of assumptions,” including the vaccination rates for girls, can affect how much each prevented case of illness costs. Still, the group concluded HPV vaccination would be worthwhile for boys and men up to 21.

In response to a question about potential financial conflicts, the American Academy of Pediatrics said that the members of its policy-writing committees have to provide disclosures to the group. “Neither Rodney Willoughby, the lead author of the HPV policy, or Michael Brady, the chair of the Committee on Infectious Diseases, had any financial disclosures,” a spokeswoman for the group told Shots in an email.

In Rhode Island, where HPV vaccination of boys has been common, there’s been no backlash, NPR’s Dick Knox reported last year. “There’s been a surprisingly muted reaction,” Dr. Don Dizon, a Brown University oncologist, told him. “We tend to believe that girls are chaste and are going to ‘save themselves for marriage.’ But, you know, sexual activity is something that’s almost expected of boys.”