Gale Dunham, a pharmacist in Calistoga, Calif., knows the devastation the opioid epidemic has wrought, and she is glad the anti-overdose drug naloxone is becoming more accessible.

But so far, Dunham said, she has not taken advantage of a California law that allows pharmacists to dispense the medication to patients without a doctor’s prescription. She said she plans to take the training required at some point but has not yet seen much demand for the drug.

“I don’t think people who are heroin addicts or taking a lot of opioids think that they need it,” Dunham said. “Here, nobody comes and asks for it.”

In the three years since the California law took effect, pharmacists have been slow to dispense naloxone, which reverses the effects of an overdose. They cite several reasons, including low public awareness, heavy workloads, fear that they won’t be adequately paid and reluctance to treat drug-addicted people.

In 48 states and Washington, D.C., pharmacists have flexibility in supplying the drug without a prescription to patients, or to their friends or relatives, according to the National Alliance of State Pharmacy Associations. But as in California, pharmacists in many states, including Wisconsin and Kentucky, have divergent opinions about whether to dispense naloxone.

“The fact that we don’t have wider uptake … is a public health emergency in and of itself,” said Virginia Herold, executive officer of the California State Board of Pharmacy. She said both pharmacists and the public need to be better educated about the drug.

Pharmacists are uniquely positioned to identify those at risk and help save the lives of patients who overdose on opioids, said Talia Puzantian, a pharmacist and associate professor of clinical sciences at Keck Graduate Institute School of Pharmacy in Claremont, Calif.

“There’s a Starbucks on every corner. What else is on every corner? A pharmacy. So we are very accessible,” Puzantian told a group of pharmacy students recently as she trained them on providing naloxone to customers. “We are interfacing with patients who may be at risk. We can help reduce overdose deaths by expanding access to naloxone.” 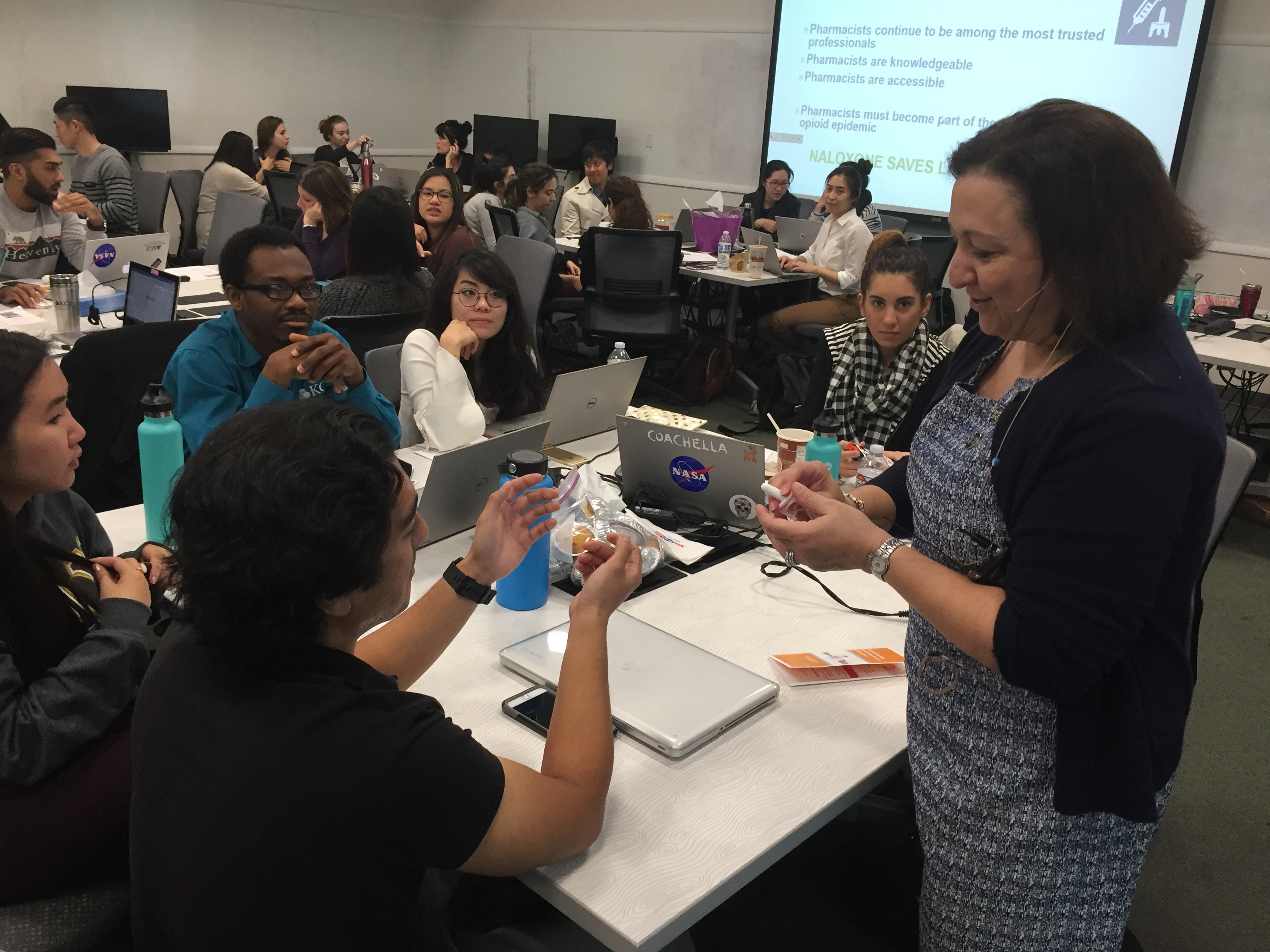 Naloxone can be administered via nasal spray, injection or auto-injector. Prices for it vary widely, but insurers often cover it. The drug binds to opioid receptors, reversing the effect of opioids and helping someone who has overdosed to breathe again.

At least 26,500 overdoses were reversed from 1996 to 2014 because of naloxone administered by laypeople, according to the National Institute on Drug Abuse. Since then, the drug has become much more widely available among first responders, law enforcement officers and community groups. The drug is safe and doesn’t have serious side effects, apart from putting someone into immediate withdrawal, according to the institute.

Information on how many pharmacists are dispensing naloxone is limited, but one study last year showed access to the drug at retail pharmacies increased significantly from 2013 to 2015 from previously small numbers.

Interviews and available evidence from around the U.S. indicate that pharmacists have varying perspectives. In Kentucky, for example, one study found that 28 percent of pharmacists surveyed were not willing to dispense naloxone.

In Pennsylvania, pharmacists weren’t exactly lining up to hand out naloxone when the state passed a law in 2015 allowing them to do it, said Pat Epple, CEO of the Pennsylvania Pharmacists Association. She said there were some initial obstacles, including the cost of the drug and pharmacists’ limited awareness of the law. The association worked with state health officials to raise awareness of naloxone among patients and pharmacists and reduce the stigma of dispensing it, Epple said.

Wisconsin is also among the states that allow pharmacists to dispense naloxone. Sarah Sorum, a vice president at the Pharmacy Society of Wisconsin, said the state’s pharmacists want to expand their public health role and help curb the opioid epidemic. But reimbursement has been a challenge, she said.

Not all health plans across the nation cover the full cost of the drug, and pharmacists also are concerned about getting paid for the time it takes to counsel patients or their relatives.

California and other states require pharmacists to undergo training before they can dispense naloxone to patients who don’t have a doctor’s prescription. Puzantian and others say that in California not enough pharmacists are getting the training, which can be taken online or in person and can cost a few hundred dollars.

So far, the California State Board of Pharmacy has trained between 450 and 500 pharmacists, and the membership-based California Pharmacists Association has added an additional 170. Other smaller organizations offer the naloxone training, according to the association. There are about 28,000 licensed pharmacists in the state.

Once trained, California pharmacists who provide naloxone must screen patients to find out if they have a history of opioid use. They also must counsel people requesting the drug on how to prevent, recognize and respond to an overdose.

Some say training requirements are an unnecessary barrier, especially given the high level of education already required to become a pharmacist.

Some of the bigger pharmacy chains, including CVS, Rite Aid and Walgreens, have made the drug available without a prescription in the states that allow it. Walgreens has announced that it would stock the nasal spray version of naloxone at all of its pharmacies. It said it offers the drug in 45 states without requiring the patient to have a prescription.

Peter Lurie, president of the Center for Science in the Public Interest, said not every pharmacy has to dispense naloxone for people to have access to it. “But the greater the number of dispensing pharmacies the better,” he said, adding that it is “especially important in more sparsely populated areas.”

Corey Davis, deputy director of the Network for Public Health Law, said making naloxone available over the counter would also increase access, since people could buy it off the shelf without talking to a pharmacist.

Bryan Koschak, a community pharmacist at Shopko in Redding, Calif., said people should go to a hospital or doctor’s office for naloxone. “I am not champing at the bit to do it,” he said. “It is one more thing on my plate that I would have to do.”

Michael Creason, a pharmacist in San Diego expressed a different view. He did the training after his employer, CVS, required it. He said pharmacies are a great vehicle for expanding access to naloxone because patients often develop a rapport with their pharmacists and feel comfortable asking for it.

Pharmacy associations should educate their members about the laws that allow naloxone to be provided without a doctor’s prescription and persuade more of them to provide the drug to customers who need it, Lurie said. Others say more pharmacists should put up signs to make customers aware that naloxone is available in their shops.

The California Pharmacists Association said it is trying to raise awareness through newsletters and emails to pharmacists in the state. “We want to see every pharmacy be able to furnish naloxone and every person at risk have access to it,” said Jon Roth, the association’s CEO.

The state’s pharmacy schools also include the training in their curriculum. One day recently, Puzantian explained to a classroom full of pharmacy students that naloxone is effective, safe and can prevent death.

“You can’t get a dead addict into recovery,” she told the students. Drug users “might have multiple overdoses, but each overdose reversal is a chance for them to get into recovery.”