He’s a self-employed, self-sufficient logger who has cleared his own path for most of his 57 years, never expecting help from anyone. And even though he’d been uninsured since 2009, he especially wanted nothing to do with the Affordable Care Act.

“I don’t read what the Democrats have to say about it because I think they’re full of it,” he told his friend Bob Leinhauser, who suggested he sign up. 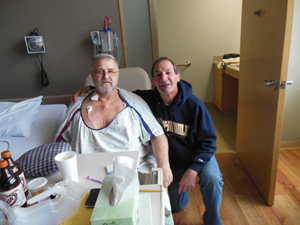 That refrain changed this year when a faulty aortic valve almost felled Angstadt. Suddenly, he was facing a choice: Buy a health plan, through a law he despised, that would pay the lion’s share of the cost of the life-saving surgery – or die. He chose the former.

“A lot of people I talk to are so misinformed about the ACA,” Angstadt said. “I was, before Bob went through all this for me. I would recommend it to anybody and, in fact, have encouraged friends, including the one guy who hauls my logs.”

In 2011, Angstadt had a pacemaker and defibrillator implanted to help his ailing heart pump more efficiently. Not long after, the almost 6-foot, 285-pound man’s man was back in the woods, doing the Paul Bunyan thing.

But last summer, his health worsened again. It was taking him 10 minutes to catch his breath after felling a tree. By fall, he was winded after traveling the 50 feet between his house and truck.

“I knew that I was really sick,” said the Boyertown resident. “I figured the doctors were going to have to operate, so I tried to work as long as I could to save money for the surgery. But it got to the point where I couldn’t work.”

Angstadt called Leinhauser. The political odd couple talked a bit before Angstadt mentioned he was having trouble breathing.

Leinhauser, 55, a retired firefighter and nurse, drove him to a doctor’s office. “Dean only saw a doctor when he needed to because it made a big difference in his finances,” Leinhauser said.

From time to time, Leinhauser would urge Angstadt to buy a plan through the ACA marketplace. And each time, Angstadt refused.

“We argued about it for months,” Angstadt said. “I didn’t trust this Obamacare. One of the big reasons is it sounded too good to be true.”

January came, and Angstadt’s health continued to decline. His doctor made it clear he urgently needed valve-replacement surgery. Leinhauser had seen enough and insisted his friend get insured.

“The only thing he was ever really adamant about was that Obamacare was the real deal,” Angstadt said. “I trusted him to at least take a look at it.”

Leinhauser went to Angstadt’s house, and in less than an hour, the duo had done the application. A day later, Angstadt signed up for the Highmark Blue Cross silver PPO plan and paid his first monthly premium: $26.11.

“All of a sudden, I’m getting notification from Highmark, and I got my card, and it was actually all legitimate,” he said. “I could have done backflips if I was in better shape.”

Angstadt’s plan kicked in on March 1. It was just in time. Surgery couldn’t be put off any longer. On March 31, Angstadt had life-saving valve-replacement surgery.

“I probably would have ended up falling over dead” without the surgery, Angstadt said. “Not only did it save my life, it’s going to give me a better quality of life.”

Angstadt faces a long recovery, but his conversion to ACA supporter is done. The political storm around the ACA, he said, is the political parties “fighting each other over things that can benefit people.”

“For me, this isn’t about politics,” he added. “I’m trying to help other people who are like me, stubborn and bullheaded, who refused to even look. From my own experience, the ACA is everything it’s supposed to be and, in fact, better than it’s made out to be.”

He has also thanked his good friend, Leinhauser, for caring enough to persuade him to buy insurance and have the surgery.

“He has thanked me a couple times,” Leinhauser said. “I just wish he would reciprocate by eating his green beans.”

Once Opposed To The Health Law, Now A Convert