Are doctors following the same health and wellness advice they give to their patients? Based on new Gallup data, physicians appear to be in better health than other members of the workforce – even nurses– which could set a good example for patients. 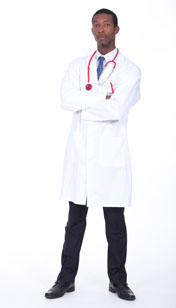 Gallup interviewed more than 1,900 physicians and more than 7,100 nurses over the course of eight months as part of their Gallup-Healthways Well-Being Index. They compared the responses of these health care professionals to other people who were employed during that time period to see how the health of medical workers stacked up.

The index was divided into physical health issues — which looked at obesity, illnesses that impede normal activities and the number of sick days taken in the past month — and healthy behaviors such as smoking, eating habits and exercise.

The only metric where physicians scored poorly was related to cancer.  Six percent of physicians reported they were diagnosed with some form of cancer, a higher rate than nurses and other workers. This finding, according to Gallup, could reflect “environmental and lifestyle factors unique to doctors,” but does not take into account doctor’s vigilance in getting cancer screenings or whether they are more attuned to warning signs.

The health and well-being of physicians is a growing concern for health care experts. Medical groups like the American Medical Association focus on tools to reduce physician burnout, suicide and stress-related ailments as well as ensuring that doctors set good examples for their patients

“A physician’s personal health is an important component of health promotion and disease prevention, because physicians are important role models for patients and their peers,” said AMA Board Chair Dr. Steven J. Stack in a statement.

The Gallup data show that physicians are making healthier lifestyle choices which can impact the care and education the deliver to their patients. Studies have shown that poor physician health leads to poor delivery of care. A January study from the Johns Hopkins Bloomberg School of Public Health indicates that a doctor’s weight can impact how they deliver care and diagnoses for obesity. “Physicians with normal [body mass index] also have greater confidence in their ability to provide diet and exercise counseling and perceive their weight loss advice as trustworthy when compared to overweight or obese physicians,” according to the study’s lead author Sara Bleich, PhD.

Meanwhile, state medical societies such as the Minnesota Medical Association also are focusing on this issue.  Last year, Dr. Patricia Lindholm, the former MMA president, started a blog on physician well-being called Well Physician. “It’s time we care for the caregiver,” she writes in a blog post.

Physicians Are Healthier Than Nurses, Other Workers, Says Survey