As Senate Democrats square off with House GOP leaders over the current federal budget bill, family planning funding remains an important point of contention. Republicans say tough choices need to be made in a time of fiscal austerity, but Democrats in Congress and the White House say family planning funds are essential and should not be stripped from the budget. 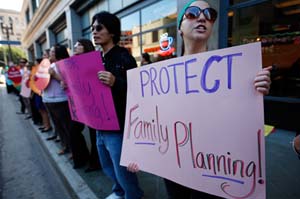 Last month, the Republican-led House passed a spending bill that slashes funds for family planning clinics and eliminates federal support for Planned Parenthood, a major provider of reproductive health care in the United States. Senate Democrats have since offered up their own spending bill, one that would restore the family planning funding, but the full Senate failed to pass either measure in votes Wednesday. Negotiations between the House and Senate are expected to continue. The current short-term funding measure expires March 18.

“Nobody is saying that Planned Parenthood cannot continue to be the largest abortion provider in America, but why do millions of pro-life taxpayers have to pay for it?” Rep. Mike Pence, R-Ind., one of the leaders of the effort to strip such funding from the bill, said in a floor speech during the House debate last month.

Planned Parenthood has launched a fierce public relations campaign against the measure, backed by progressive Democrats who have vowed to fight the GOP.

“It’s just amazing that the Republican leadership is anti-choice and on the other hand, anti-family planning,” Rep. Barbara Lee, D-Calif., said at a press conference on the issue. She added, “This is a war on women.”

What Is Title X?

Title X (ten) of the Public Service Act is a federal grant program signed into law by President Richard Nixon in 1970. According to the Guttmacher Institute, a New York-based reproductive health research center, the law had broad bipartisan support and was the result of increasing concerns that low-income women were not able to get access to family planning services and had higher rates of unwanted pregnancies than more affluent women.

Title X grants, which are administered through state health departments or regional agencies, support family planning programs in 4,500 clinics serving 5 million individuals across the country. The funds, which totaled $317 million last year, are used to provide a range of reproductive health and family planning services primarily to low-income individuals. The program is run by the Department of Health and Human Services and provides funding for contraceptive counseling and supplies, STD testing, breast and cervical cancer screenings, vasectomies, hypertension and blood pressure measurement, prenatal care and sex education.

While Title X is the only federal program dedicated exclusively to reproductive health care, it isn’t the only source of public funding for family planning services, or even the largest. About 12 percent of the $1.85 billion in public funds spent on family planning services in 2006 came from Title X, according to Guttmacher. The biggest chunk of funds-71 percent-came from Medicaid, a joint federal-state health program for low-income individuals and families. The remainder was funded through various federal block grants and state appropriations.

What Are Republicans Proposing?

Several measures offered by Republicans are part of the House budget bill, which was approved on a strict party vote on Feb. 19.

All Title X funding is eliminated in the massive spending bill that sets budget levels for the remainder of the fiscal year, which ends Sept. 30. That “continuing resolution,” H.R. 1, seeks to trim billions of dollars from discretionary funding in the federal budget.

The House also approved an amendment offered by Pence to the spending bill that cuts all forms of federal funding for Planned Parenthood, which operates a network of more than 800 family planning clinics nationwide. Planned Parenthood receives roughly $360 million in federal assistance annually through Medicaid, Maternal and Child Health block grants and other sources.

The GOP’s plans to cut Title X and to defund Planned Parenthood are at odds with President Barack Obama’s priorities-the president requested $372 million for family planning in his FY 2012 budget.

Does This Affect Abortion Coverage?

Before introducing his amendment to the spending bill, Pence had also introduced H.R. 217, known as the “Title X Abortion Provider Prohibition Act,” which would prevent health centers that offer abortion services from receiving future Title X family planning grants (exceptions would be made in cases of rape, incest or a threat to the mother’s health). The bill has been effectively tabled pending the vote on the overall spending continuous resolution, which, if enacted, would eliminate the need for H.R. 217.

Several other bills dealing with abortion funding have also been introduced.

What Do Family Planning Supporters Say Is At Stake?

Reproductive health advocates such as Families USA, Planned Parenthood and NARAL Pro-Choice America argue that eliminating or restricting access to Title X money would cut off vital financial support for health centers that are providing care at steeply discounted rates for low-income patients. According to Adam Sonfield, a senior public policy associate at the Guttmacher Institute, Title X money gives clinics the flexibility to invest in things like outreach and infrastructure-something Medicaid payments don’t account for. The institute also estimates that the contraceptive services offered at Title X centers prevent 973,000 unintended pregnancies each year.

Planned Parenthood says six in 10 family planning centers in the U.S. receive Title X funds, which account for 24 percent of their revenues. Planned Parenthood is the largest single recipient of Title X money, securing about a quarter of the total allocated to health centers each year.

According to Karen Rowley, who oversees several Planned Parenthood-affiliated health centers in California’s Fresno area, clinics are already turning away patients because of the overwhelming demand for services. Losing all federal funding would further exacerbate the problem.

“Many of our patients would go without medical care, not only reproductive healthcare but for primary care needs,” Rowley said.

The national organization has painted a picture that is even more dire-63 percent of its health centers would be at risk for shutting down altogether if H.R. 1 passes, the group says.

What Do Critics Say About Cutting Planned Parenthood’s Federal Funds?

The Heritage Foundation, a conservative think tank based in D.C., presents a different view.

Chuck Donovan, a senior research fellow at the foundation, says Planned Parenthood has significant income beyond federal funding, citing a 2010 GAO report indicating the organization’s income was $388 million between 2002 and 2007. “They can afford to join in the belt-tightening that is happening all across the country,” he said.

As for the other health centers that would be affected by Title X cuts, Donovan said that supporting family planning through tax rebates or vouchers, rather than a categorical funding program with an established mandate, would be a better option.

“Our preference is to fund health care through things that give individuals choice,” he said.

Pence has acknowledged that health centers use Title X money to perform valuable services that he supports, but he contends that the funds are also being used to support abortions indirectly by covering operating costs and other related expenses for Planned Parenthood and other abortion providers.

“Eliminating Title X funding has never been my goal,” he said on the House floor. “My focus has and will remain on denying taxpayer dollars to Planned Parenthood or any organization that provides or promotes abortion as a means of birth control.”

This is an updated version of an article that first ran Feb. 18.

A Guide To GOP Proposals On Family Planning Funds