The Republican proposal to change Medicare that has been championed by GOP vice presidential candidate Paul Ryan remains unpopular with Americans, although younger people are more receptive to it than older ones, according to a new poll.

Only 37 percent say that the program should be changed to a “premium support” system in which the government provides beneficiaries with a fixed amount of money to buy coverage, either from traditional Medicare or private insurers, the poll by the Kaiser Family Foundation found. (KHN is an editorially independent part of the foundation.) Fifty-five percent support keeping Medicare as it is today, with a guaranteed set of health benefits. Only a quarter of Americans aged 55 or older want the program to change, and even a majority of older Republicans opposed the proposal backed by the GOP-controlled House.

However, the poll found that younger Americans are less resistant. Among adults between 18 and 54, 50 percent favor keeping Medicare as it is, and 44 percent believe it should switch to the premium support model, which is also called a defined contribution. Even among Democratic adults under 55, 41 percent supported the Republican approach; the survey question did not indicate that it’s a GOP plan.

The age gap is somewhat ironic, because those who are most opposed to the proposed new system would be least affected. Ryan’s plan would exempt those over 55 and allow them to remain in traditional Medicare, a feature supported by Mitt Romney, the GOP presidential candidate. Nonetheless, this carve out has not won over the elderly — who are among the most reliable voting blocs — the poll shows.

The poll found that many voters on both sides switch their views depending on how the program is described to them. For instance, when told about the exemption for people over 55, 19 percent of Americans said they were “more interested” in making the change—giving the premium support side a 53 percent majority.

“It’s important to note that opinion on the defined contribution plan, as is often true when it comes to major policy changes that are difficult to explain, is still quite malleable,” the pollsters wrote.

Supporters of traditional Medicare were most likely to reconsider when told that changing to a premium support system was needed to sustain Medicare for future generations.

The poll found that Democrats also have influential arguments for those Americans leaning toward supporting the change. Between 14 percent and 19 percent said they were less interested in making the change after being told either that it would shift the cost from the government to seniors; that it would give the insurance industry “too much influence” over seniors’ health care; that it would turn Medicare into a “voucher” program or that it would end “traditional Medicare as we know it.” The cost shift argument was the most persuasive of those tested by the pollsters.

Overall, most voters believe the federal deficit can be dealt with without reducing Medicare spending, but they also believe some sort of changes will be necessary for Medicare for its long-term sustainability.

The poll found that many Americans were not even familiar with the terms used in this debate. Less than a quarter of people knew what either “premium support” or “defined contribution” means. Half of voters recognized the term “voucher,” which Democrats have been using pejoratively to describe the program.

The poll found that Medicare remains an important issue for voters: less critical than their concerns about the economy and the budget deficit but more pressing than any other topic, including the 2010 health care law. The poll also found that generally the public trusts President Barack Obama on health issues more than Mitt Romney, although elderly voters are about evenly split on which candidate would do a better job with Medicare. Independent elderly voters thought Romney would do a better job guiding the program’s future.

The poll continued to find the public split on the health law. This month, 45 percent favored it and 40 percent didn’t. Older Americans are more negative than younger ones. The poll found that knowledge of what’s in the law remains weak: Less than half of those polled knew about components such as closing the Medicare prescription drug “doughnut hole” and making more affluent people pay more in premiums and payroll taxes for Medicare. Only 39 percent are confident that the law does not include government “death panels” that make decisions about end-of-life care. 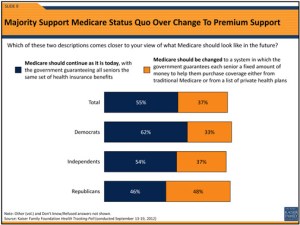