In the 25 years since she snorted her first line of meth at a club in San Francisco, Kim has redefined “normal” so many times. At first, she said, it seemed like meth brought her back to her true self — the person she was before her parents divorced, and before her stepfather moved in.

Kim is 47 now, and she has been chasing normal her entire adult life. That chase has brought her to some dark places, so she asked us not to use her last name. For a long time, meth, also known as speed, was Kim’s drug of choice.

Then she added heroin to the mix. She tried it for the first time while she was in treatment for meth.

“That put me on a nine-year run of using heroin. And I thought, ‘Oh, heroin’s great. I don’t do speed anymore.’ To me, it saved me from the tweaker-ness,” Kim said, referring to the agitation and paranoia many meth users experience, and how heroin, an opiate, calmed that.

Now, Kim has finished treatment for both drugs.

Kim was part of the previous meth wave, in the ’90s, and now she’s part of a new meth epidemic that has been sweeping through parts of the United States, especially the West. Deaths involving methamphetamine are up. Hospitalizations are up. 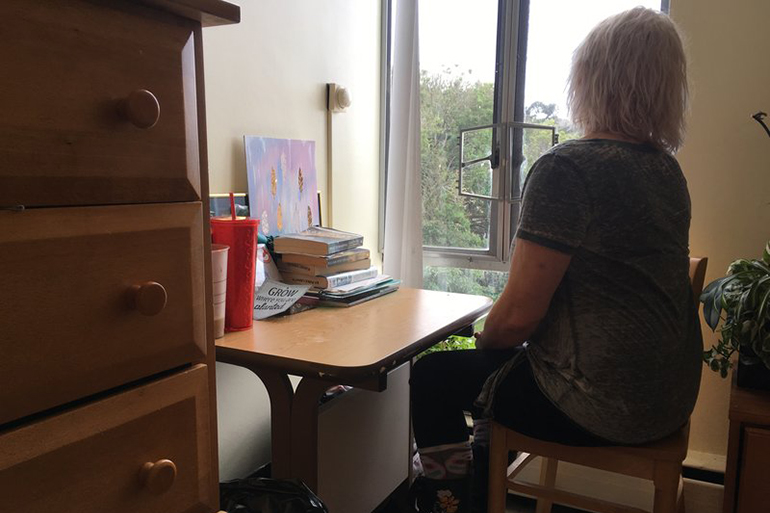 After struggling with addiction to both heroin and meth for decades, Kim got care at a residential treatment program for women — Epiphany Center, in San Francisco. She’s now working and plans to go back to college in the fall.(April Dembosky/KQED)

Researchers who have tracked drug use for decades believe the new meth crisis got a kick-start from the opioid epidemic.

“There is absolutely an association,” said Dr. Phillip Coffin, director of substance use research at the San Francisco Department of Public Health.

Across the country, more and more opioid users say they now use meth as well, up from 19% in 2011 to 34% in 2017, according to a study published last year in the journal Drug and Alcohol Dependence. The greatest increases were in the western United States.

That research suggests efforts to get doctors to cut down on writing opioid prescriptions may have driven some users to buy meth on the street instead.

“Methamphetamine served as an opioid substitute, provided a synergistic high, and balanced out the effects of opioids so one could function ‘normally,’” the researchers wrote.

It’s kind of like having a cup of coffee in the morning to wake up, and a glass of wine in the evening to wind down: meth on Monday to get to work, heroin on Friday to ease into the weekend.

Amelia said that’s how her drug use evolved to include meth — she also asked that we use only her first name because she has used illegal substances.

At first, drugs were just a fun thing to do on weekends — ecstasy and cocaine with her friends. Then, on Monday, Amelia went about her workweek.

Then one weekend, when Amelia was feeling kind of hung over from the night before, a friend passed her a pipe. She said it was opium.

She grew to like the opium stuff. Eventually, Amelia met up with her friend’s dealer.

“The woman said, ‘How long have you been doing heroin for?’ and my jaw nearly hit the ground,” Amelia said. “I was just really, honestly shocked. I was like, ‘What? I’ve been doing heroin this whole time?’ I felt really naive, really stupid for not even putting the two together.”

Pretty soon, Amelia started feeling sick around the same time every day. It was withdrawal symptoms, a clear sign she was becoming dependent on the drug. Her weekend smoke became her daily morning smoke. Then it was part of her lunch-break routine.

“I just kind of surrendered to that and decided, ‘Screw it,’” she said. “‘I’ll just keep doing it. I’m obviously still working; I’m fine.’”

But bankrolling her heroin habit was exhausting. One day, one of the women she worked with at the horse barn offered her some meth as a pick-me-up.

Meth is comparatively cheap. It became the thing that kept Amelia going so she could earn enough money to buy heroin.

This pattern lasted for three years, until Amelia discovered she was pregnant. As soon as her daughter was born, she entered a residential treatment program in San Francisco, called the Epiphany Center, that would accept her and her baby.

“I was OK with being a drug addict. I was OK with that being my life,” she said. “But I wasn’t OK with having kids and letting that be part of my life.”

Rehab Admissions On The Rise For Users Who Mix Meth, Heroin

Admissions to drug rehabilitation for heroin have remained steady in recent years in San Francisco. But the number of heroin addicts reporting methamphetamine as a secondary substance problem has been rising. In 2014, 14% of heroin users said meth was also a problem. Three years later, 22% said so.

“That is very high,” said Dr. Dan Ciccarone, a physician and professor at the University of California-San Francisco who has been studying heroin for almost 20 years. “That’s alarming and new and intriguing and needs to be explored.”

The speedball — heroin and cocaine — is a classic combination, he said.

“It’s like peanut butter cups, right? Chocolate and peanut butter together,” he said. “Methamphetamine and heroin are an unusual combination.”

The meth-and-heroin combo is referred to as a goofball, Ciccarone added, because it makes the user feel “a little bit silly and a little bit blissful.”

For Kim, adding heroin to her methamphetamine habit compounded her use. “I ended up doing both, at the same time, every day, both of them,” she said.

It was all about finding the recipe to what felt normal. Start with meth. Add some heroin. Touch up the speed.

“You’re like a chemist with your own body,” she said. “You’re balancing, trying to figure out your own prescription to how to make you feel good.”

Now Kim is trying to find balance without drugs. She’s been sober for a year. So has Amelia, the horse trainer. Her sobriety anniversary is her daughter’s birthday.

Meth In The Morning, Heroin At Night: Inside The Seesaw Struggle of Dual Addiction