This story is part of a reporting partnership that includes Oregon Public Broadcasting,

Over jeers and cheers from the audience, commissioners on the Portland, Ore., City Council voted Wednesday to add fluoride to the city’s drinking water starting in 2014. 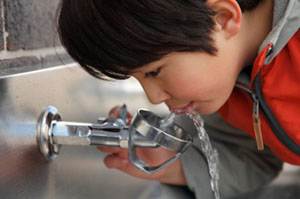 Portland is the largest American city that doesn’t add fluoride to its drinking water. But some groups have raised questions about the possible risks from fluoridation and oppose its use.

In the middle of the 20th century, researchers learned that high levels of naturally-occurring fluoride in towns like Colorado Springs were causing children’s teeth to grow in brown and mottled. They also noticed that these kids’ teeth were surprisingly resistant to decay.

So in 1945, Grand Rapids, Mich., agreed to an experiment to add a small amount of fluoride to its water. An 11-year study by the U.S. Surgeon General found the rate of cavities among children there dropped 60 percent.

Still, Kim Kaminski is among those who remain unconvinced. Kaminski is with Clean Water Portland, which is battling the introduction of fluoride in Portland’s water. She cited studies to support her cause. Perhaps the most worrisome was a 2006 Harvard study. A key finding:

“For males less than 20 years old, fluoride levels in drinking water during growth, is associated with an increased risk of osteosarcoma.”

Osteosarcoma is a bone cancer.

Kaminski said that finding was scary. “This was peer-reviewed and published. It was a very solid study,” she said. “And at the time, being a mom it was very concerning to me.”

Dr. Catherine Hayes of Health Resources in Action was an adviser to the 2006 study, and she co-authored a follow-up study. In the second study, she said, the researchers looked at samples of bone from people who had the cancer — instead of just gathering information about previous cases of the disease, as the first study had done. The second study showed there’s no link between osteosarcoma and fluoride, she said.

“There was no difference in the amount of fluoride in the bone,” Hayes said. “That’s really significant, because now we’re not estimating fluoride intake, we’re really measuring it.”

But fluoride opponents like Kaminiski aren’t buying it. They say the study’s co-author, Chester Douglass, received payments from the toothpaste company Colgate-Palmolive.

Hayes says the allegations against Douglass don’t hold water. “He was thoroughly investigated by Harvard University — a very extensive investigation — and found completely innocent of any wrongdoing,” she said.

The latest study to raise hackles also comes out of Harvard. It went through information from 27 previous studies and concluded that there is “the possibility of an adverse effect of high fluoride exposure on children’s neurodevelopment.”

The study said more research was needed. But Dr. Myron Allukian of the Harvard School of Dental Medicine says the analysis was flawed.

For starters, he says, there were problems with the Chinese studies included in the meta-analysis. And the effect on IQ was small — accounting for only about a half-point difference, he said. “A half-point difference in IQ is meaningless. That’s like saying, we measured all the people in New York and Chicago, and in New York they were a half-millimeter taller.”

Portland Commissioner Randy Leonard is among those who endorsed fluoridation. “The people that suffer the most from not having fluoridated systems are kids — and particularly kids of color— and it has to stop,” he said.

Despite today’s vote, city commissioners may not have the last say. Anti-fluoride advocates want a ballot measure to put the decision before the people.

The Great Fluoride Debate In Portland