When the potato lobby speaks, it always puts its best spuds forward. Today, at a National Press Club lunchtime briefing to promote the nutritional value of the vegetable, that meant a full bar of baked potatoes, french fries (baked, not fried) and all the requiste trimmings — sour cream, cheddar cheese, chopped tomatoes, spinach and broccoli. Yes, according to sources close to the food, it was scrumptious. 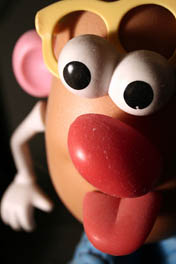 The keynote speaker at the National Potato Council event, Sen. Susan Collins, R-Maine, didn’t stop for a bite, even though her home state is one of the biggest producers of potatoes. She said she had other plans for lunch.

But Collins gave the potato lobby what it wanted. As she’s done for most of the year, she spoke out against the U.S. Department of Agriculture’s proposed school nutrition guidelines that would limit helpings of white potatoes and other starchy vegetables such as corn, peas and lima beans to one cup a week. Health experts say the move is an effort to reduce the amount of french fries kids eat and open up opportunities for kids to get other vegetables such as carrots or green beans.

“This means if a school serves a medium baked potato on a Monday it could not serve a full serving of corn or more potatoes for the rest of the week,” Collins said “That makes no sense whatsoever.” In other words, the plan is half-baked.

Collins and other potato supporters stressed the nutritional value of the spud, including potassium and dietary fiber. Moreover, they claimed potato bars which are growing more common in public schools to help entice kids to eat other vegetables and important foods like low fat cheese and broccoli and spinach.

A final ruling from the USDA is expected early in 2012.

Collins noted she and her five siblings ate some type of potato almost every day growing up in rural Maine. And none are overweight, she said.

The Potato Council released a survey of 245 school food service directors showing how most thought the new rules would lead to higher costs and more “plate waste.”

And about those french fries, the council said, only 10 percent of schools even have a fryer today.

“Today’s school lunch is not your school lunch you remember,” said Dayle Hayes, a registered dietitian, said at the briefing.

Potato Fight In The Capital