President Obama often tells audiences that he has waged his last campaign. But that’s not exactly true.

The White House is gearing up for a massive campaign this summer that will cover all 50 states, plus Washington, D.C. And the president’s legacy may hinge on whether it succeeds or fails. 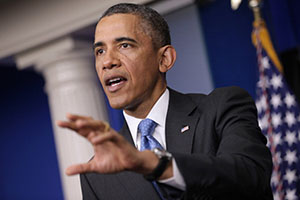 The Affordable Care Act, or “Obamacare,” has been through more life-and-death cliffhangers than a season finale of Homeland. After squeaker votes in Congress and a 5-4 ruling upholding the law at the Supreme Court, now there’s another big hurdle: getting uninsured people to buy health insurance when it becomes available Oct. 1.

When Obama delivered the commencement address at Morehouse College this month, his advice to the graduates — along with working hard and helping others — was to sign up for health insurance this fall.

“We’ve got to make sure everybody has good health in this country,” he said. “It’s not just good for you, it’s good for this country. So you’re going to have to spread the word to your fellow young people.”

David Simas, deputy senior adviser to the president, works in a quintessential West Wing office — a windowless basement room — where he oversees one of the top projects on the Obama agenda: implementing universal health coverage.

In the first year, the administration hopes to sign up 7 million people across the country. Simas says that will require TV ads, door knocking and lots of word of mouth.

The administration is developing an Expedia-style website, hoping to make the experience as customer-friendly as possible.

Nancy-Ann DeParle, who has worked on this issue for years — until recently as Obama’s deputy chief of staff — says that’s not a cause for concern.

“The truth is that people weren’t paying attention until now,” she says. “There’s so much else going on that even if we had wanted to start a campaign two years ago, it wouldn’t have been very effective because people weren’t listening.”

But with the sign-up date approaching fast, the administration’s efforts have already stumbled. Health and Human Services Secretary Kathleen Sebelius has repeatedly asked Congress for money to implement Obamacare.

Republicans have repeatedly said no, while they vote to repeal the law.

Without the money she wanted from Congress, Sebelius tried to fundraise for an independent group called Enroll America that is focused on implementing Obamacare. When Republicans heard that she was asking insurance companies and health care providers to donate millions of dollars, they cried foul.

Tennessee Sen. Lamar Alexander told Fox News: “Congress has said we refuse to give you more money to implement Obamacare, and she’s saying, ‘Well then, if you won’t do it, I’ll go outside and I will raise private money, use a private organization, and do it anyway.’ ”

“Much as a health care company might really want to improve enrollment, they also need to make sure that they do not run afoul of politicians on either side of the aisle,” Mendelson says.

If health care companies hold back, he says, it’s going to be much harder to reach all of those people in all of those communities.

“The fact of the matter is that if you starve a media campaign for funding, you’re not going to have the reach that you otherwise would, and that’s the situation that we find ourselves in,” he says.

There’s another key part of this campaign: Sicker and older people without insurance may be eager to sign up Oct. 1. But to make the system work financially, young and healthy people who don’t need much medical care have to get into the pool, too.

So you can expect administration officials around the country to give lots more commencement speeches this season, telling captive audiences of 20-somethings: Congratulations on your diploma. Now make sure to sign up for health coverage in the fall.

President Obama To Hit The Campaign Trail For Health Law