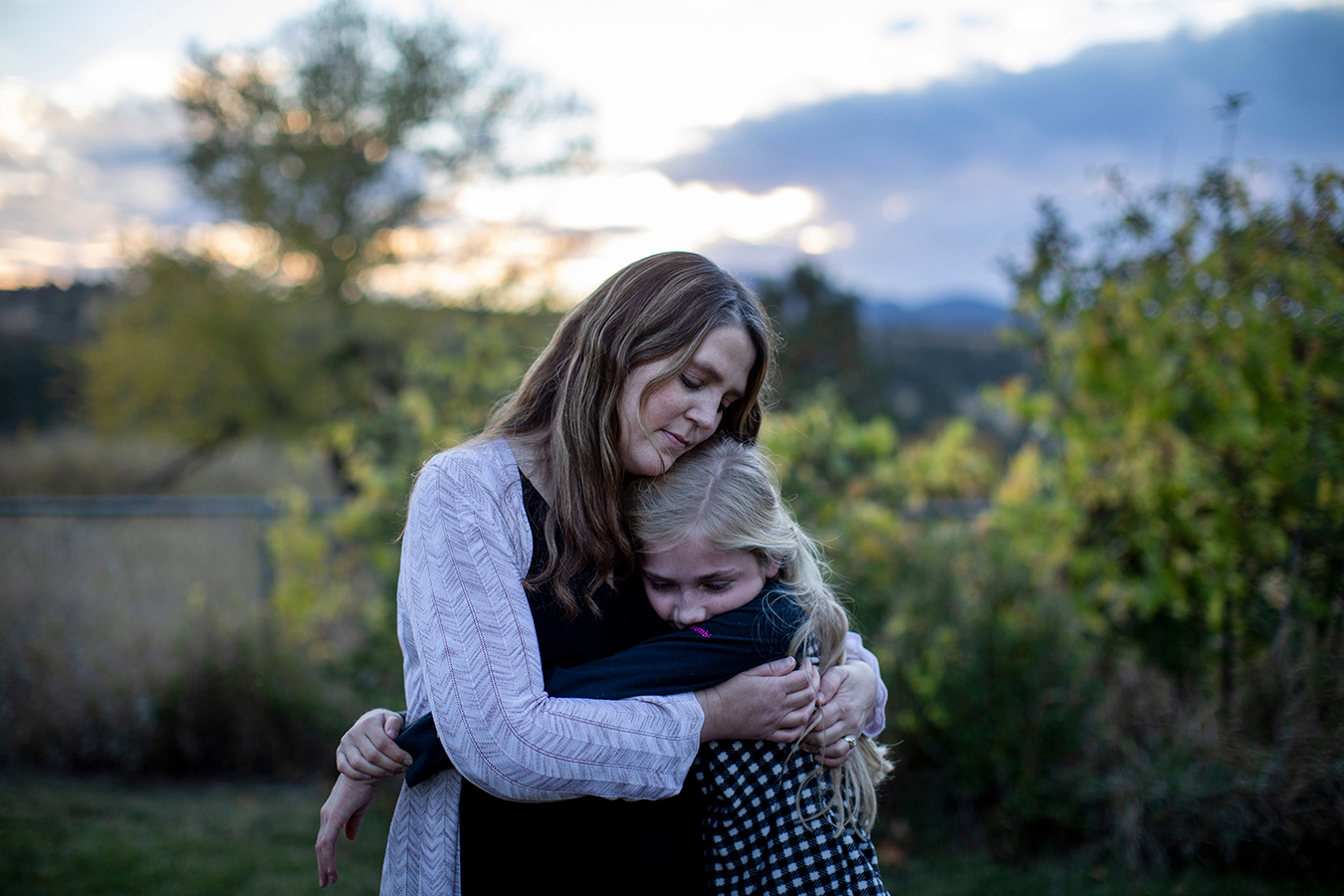 Kristen Kilmer hugs her 12-year-old daughter at their home in Spearfish, S.D.(Kristina Barker for KHN)

When Kristen Kilmer was diagnosed with incurable breast cancer at age 38, her first thought was of her 8-year-old daughter. Kilmer lost her own mother as a teenager and was determined to get more time with her only child.

Kilmer searched for experimental treatments, opting for an unproven approach in which researchers select drugs based on the genes in patients’ tumors. Doctors have selected her treatments for the past three years based on the unique, ever-changing DNA of her cancer cells. Now 41, Kilmer has responded better than anyone dared to hope. Her cancer has gone into hiding; her tumors are no longer visible on medical scans.

Kilmer’s insurance company calls it experimental. As a consequence, her insurer has covered only a fraction of her care, forcing Kilmer to make an agonizing choice: stop taking a drug that costs nearly $17,000 a month or pay out-of-pocket, burdening her family with tremendous debt.

“When you are looking at your daughter, you ask yourself, ‘Do I take a medication that might allow me to see her graduate high school?’” asked Kilmer, of Spearfish, S.D. “Or do you stop taking it to avoid causing her financial harm?” 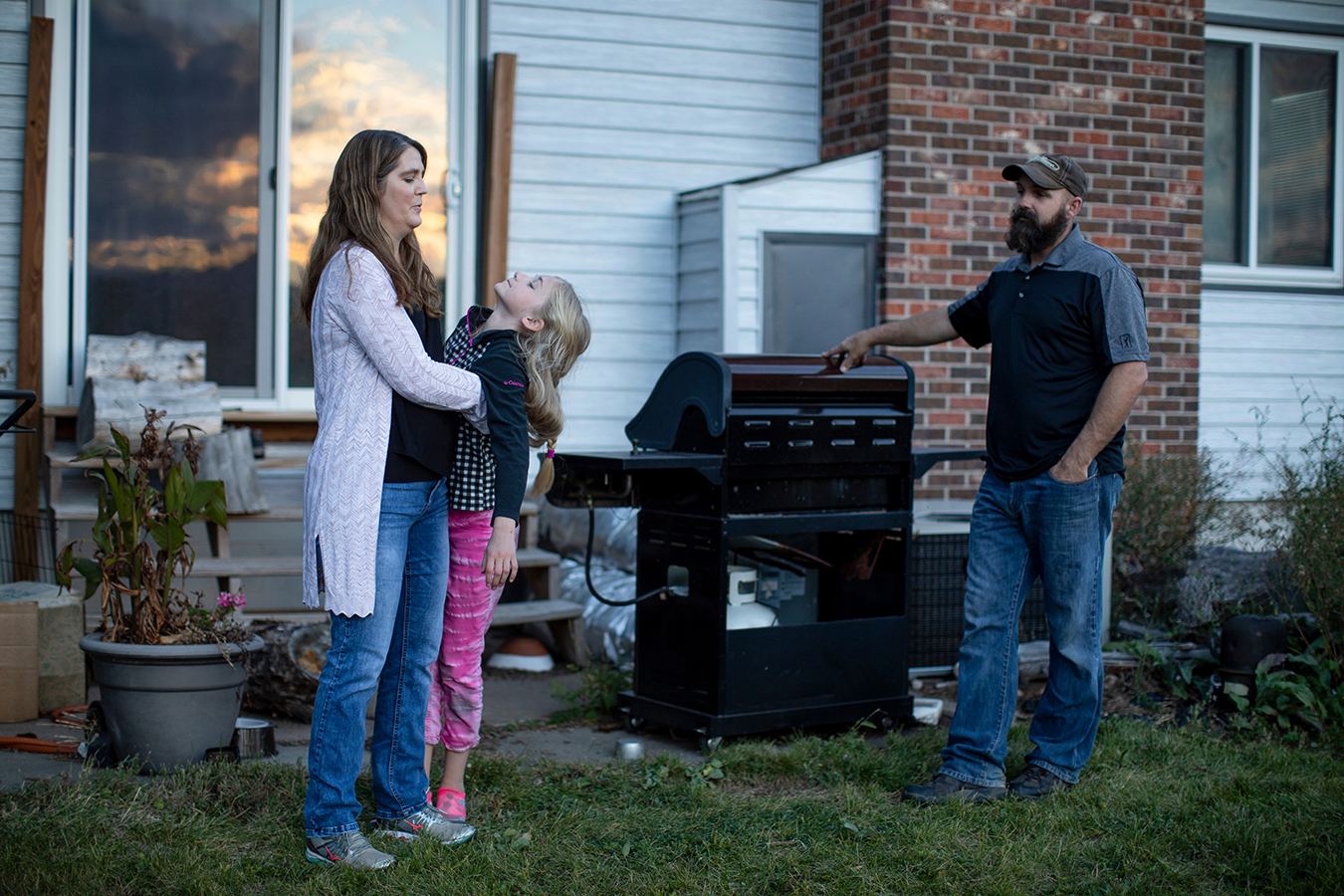 Kristen Kilmer says she would rather go without her cancer treatment than financially burden her daughter and husband, Chet Kilmer.(Kristina Barker for KHN)

The high cost of cutting-edge tests and treatments is threatening to keep precision medicine — one of the most celebrated areas in cancer research — out of reach for many patients. Patients who pay for these new treatments on their own “could be in debt for decades,” said Dr. Scott Ramsey, director of the Hutchinson Institute for Cancer Outcomes Research in Seattle.

Already cancer care is hugely expensive. A recent study in the American Journal of Medicine found that 42 percent of patients depleted 100 percent of their assets — an average loss of $92,000 — within two years of diagnosis.

Precision medicine involves running expensive tests called genomic sequencing, which scan the DNA of tumors to find mutations that might be susceptible to available drugs. Although the field is relatively new, hundreds of thousands of cancer patients have had their tumors sequenced to identify cancer-related mutations, according to testing companies.

Medicare, the government insurance plan for people 65 and older, announced in March that it will pay for genomic testing for people with advanced cancers — a decision that could add $2.5 billion to federal health care costs, according to a May analysis in Health Affairs.

Carrie Wyman, who also has advanced breast cancer, discovered that her insurance plan doesn’t cover genomic sequencing only after she received a $5,800 statement.

“I just assumed it would be covered,” said Wyman, 50, a resident of La Plata, Md., who has six children and stepchildren. “I was blindsided, to be honest with you.”

In some cases, genomic tests match patients to experimental drugs available only in clinical trials. Although these trials sometimes provide free medications, many cancer patients can’t afford to travel to participate in them. Kilmer drives 12 hours round-trip every month to participate in a clinical trial in Sioux Falls, S.D. The expenses add up quickly, she said. 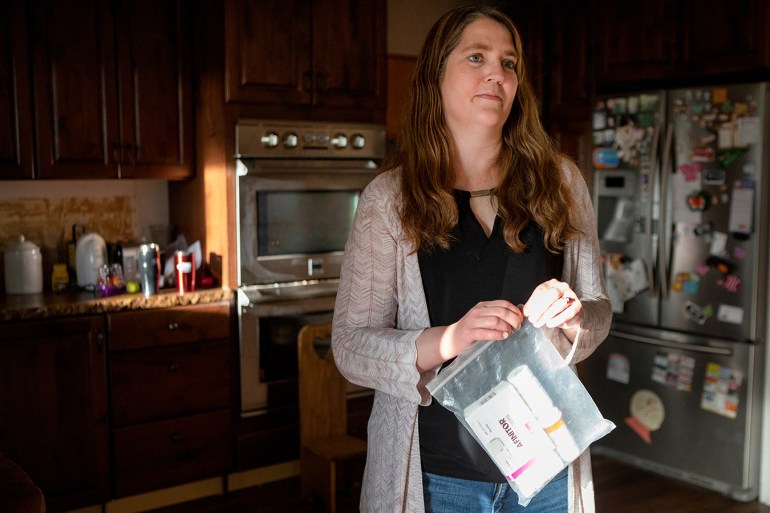 Kilmer, who was diagnosed with incurable breast cancer at 38, takes Lynparza, which costs nearly $17,000 per month. (Kristina Barker for KHN) 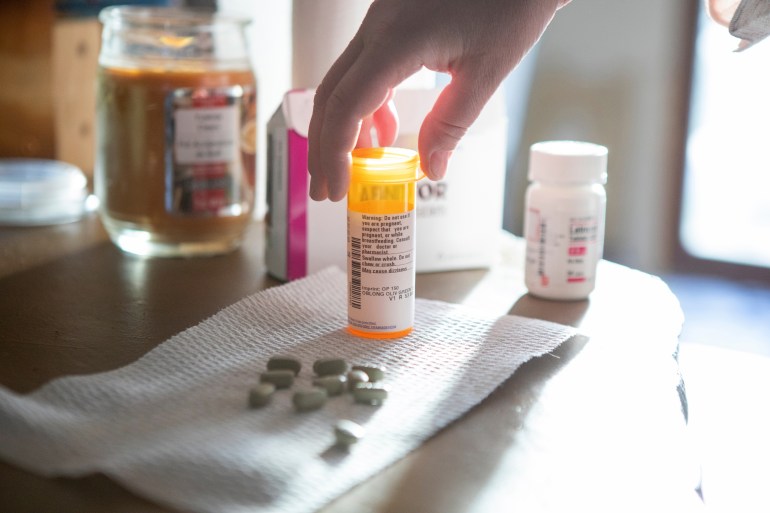 Kilmer spreads out her daily medications, including Lynparza (center).(Kristina Barker for KHN)

Kilmer’s genomic tests identified a rearrangement in the PALB2 gene. Preliminary studies suggest that tumors with this genetic rearrangement could be susceptible to the drug Lynparza, but those effects haven’t been definitively proven in large-scale studies. The Food and Drug Administration has approved Lynparza only for breast cancer patients with a mutation called BRCA.

Legally, doctors can prescribe Lynparza “off label” to anyone with cancer. But insurance programs are reluctant to cover off-label treatments, unless they’re specifically recommended in expert guidelines.

Kilmer has spent much of the past three years battling insurance officials and begging drug companies for financial assistance. The drugmakers have been generous, allowing her to take a rotating cocktail of experimental drugs for free because of her modest income.

Paying thousands of dollars a month is not an option, Kilmer said. Her family already carries significant credit card debt from earlier cancer treatments. She estimates that she has spent about $80,600 out-of-pocket treating her illness, including $23,600 on her early breast cancer therapy and $57,000 treating metastatic disease.

Kilmer said she would rather stop taking Lynparza than financially burden her daughter and husband, a truck driver.

“It’s not worth it,” Kilmer said. “I will not put my family into that kind of debt.” 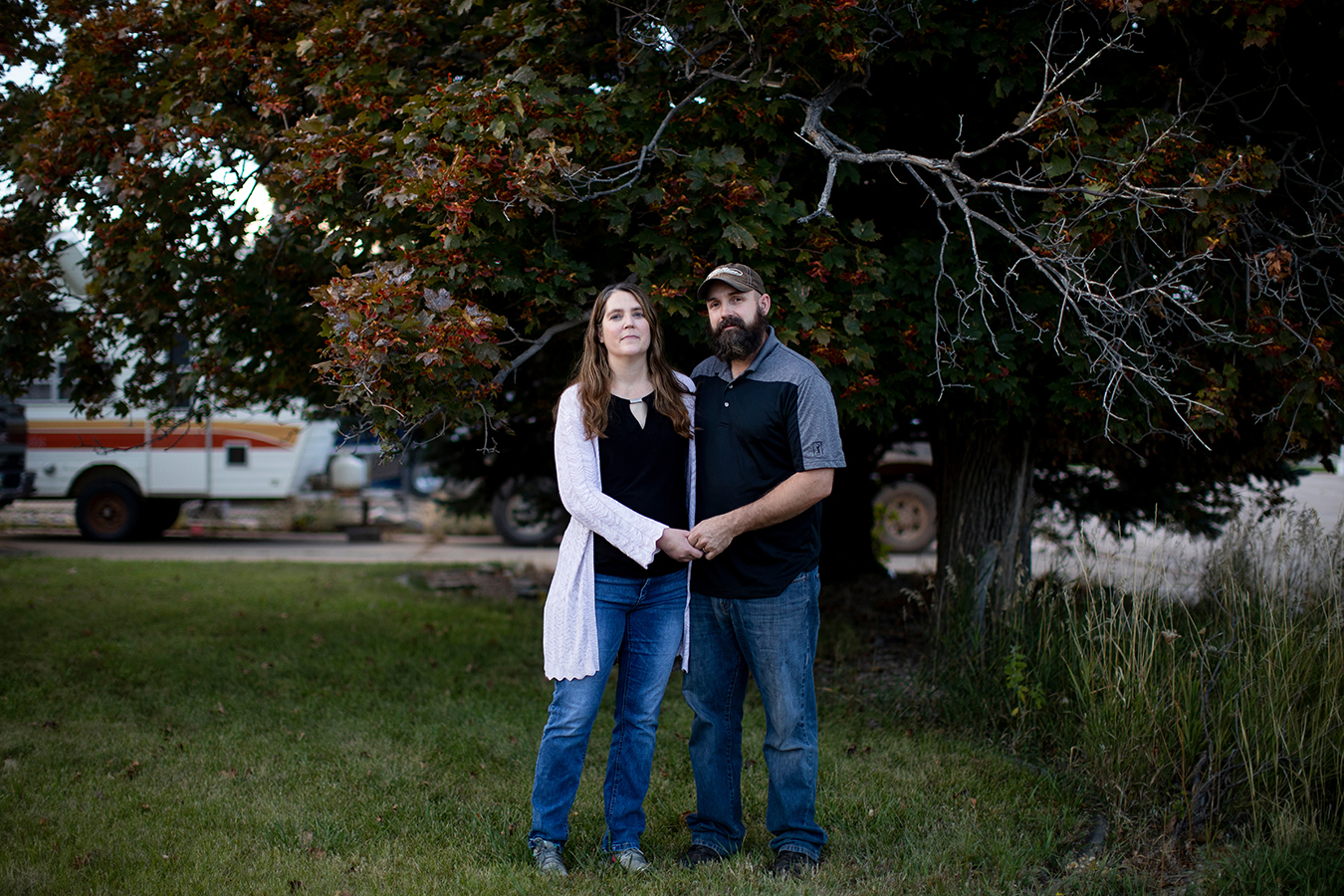 Kristen and Chet Kilmer, a truck driver, outside their home in Spearfish, S.D.(Kristina Barker for KHN)

Insurers say costs aren’t their only concern. Evidence is lacking that the precision medicine approach will work consistently, they argue.

Cathryn Donaldson, the group’s spokeswoman, described recent scientific advances as “remarkable and noteworthy.” But she said insurers “need a more definitive answer” about whether the tests help the average patient live longer.

The South Dakota State Employee Health Plan — which runs Kilmer’s insurance plan — said it bases its coverage decisions on science and reviews “published, randomized data about the safety and efficacy of the requested drugs.”

Although genetic testing has become the standard of care for melanoma and a common type of lung cancer, no one knows if genomic sequencing will extend the lives of people with other types of cancer, said Dr. Carolyn Presley, an assistant professor at the Ohio State University Comprehensive Cancer Center. 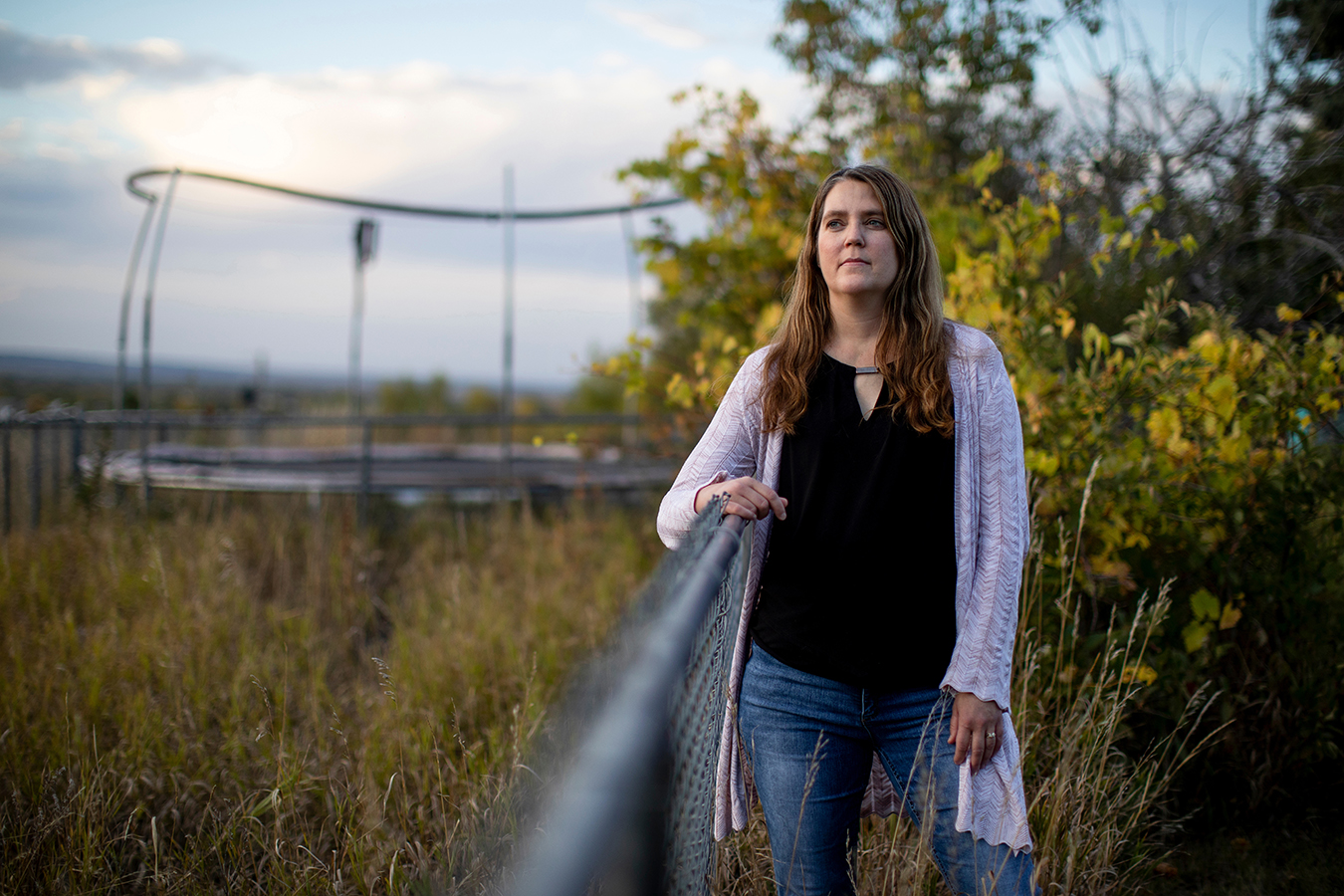 In early October, after Kaiser Health News began researching Kilmer’s story, she learned that AstraZeneca has agreed to continue providing Lynparza for free.(Kristina Barker for KHN)

Without insurance coverage, some cancer patients simply give up on treatment.

A study of more than 1,000 women with advanced breast cancer — presented at a September meeting of the American Society of Clinical Oncology — found that 54 percent had stopped or refused treatment due to cost. The women in the study may have been more vulnerable than most, because 30 percent were uninsured, about twice the national rate.

In an August study in JAMA, researchers found that relatively few of those who hoped to benefit from precision medicine actually ended up on a medication. Just 15 percent of those who underwent genomic sequencing ended up taking a targeted therapy, according to the study. The study didn’t ask participants why they failed to get a targeted drug, but Presley, the lead author, said it’s likely that some patients couldn’t afford them.

“We’re finding the mutations, but patients aren’t getting the drugs,” Presley said. Without insurance, she said, “you and I would not be able to afford these medications. It’s a huge barrier.”

Within hours of the publication of this story, AstraZeneca called Kilmer to notify her that it would continue to provide financial aid. Her medication arrived in the mail the next day.